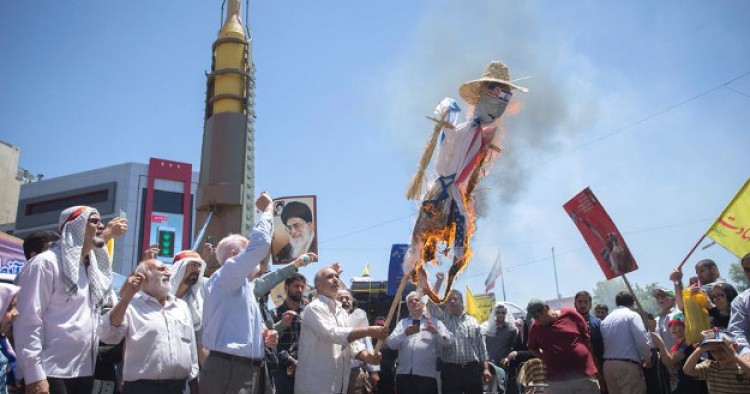 During the annual “International Quds Day” rallies in Tehran today, the Islamic Revolution Guards Corps (I.R.G.C.) showcased its ballistic missiles to send a message to Israel. At Valiasr Street in Tehran, three ballistic missiles were displayed, including Zolfighar missiles that the I.R.G.C. launched against Islamic State positions in Syria recently. Hundreds of people, including government officials, gathering near the missile exhibition and a number of them wrote anti-Israel slogans on the missiles. Others chanted “Death to Israel” and “Death to America” slogans, burned flags of the two countries, and also vowed to “not leave the resistance until the complete destruction of Israel.” Many demonstrators also hailed the I.R.G.C.’s role in regional conflicts and described the recent launch of I.R.G.C. missiles into Syria a strong message to the Islamic State, Israel and the United States. “The latest I.R.G.C. operation exhibited the power and strength of the revolution and the great nation of the Islamic Iran,” said the country’s deputy interior minister.  Ali Motahari, the deputy speaker of parliament, said this year’s Quds Day rallies have a “special message” to the United States. Other officials also made statements against Saudi Arabia.

Comment: The Iranian government has been organizing anti-Israel “International Quds Day” rallies across Iran and in regional countries every year since the 1979 Islamic Revolution. Demonstrators chant anti-Israel and anti-U.S. slogans and reiterate their allegiance to the regime. This year, however, the rallies had an additional component: the display of ballistic missile by the I.R.G.C to project power at home and abroad. It was also a message of defiance relayed to Washington, which has recently imposed new sanctions against Iran’s missile program. Earlier this week, the Iranian Parliament said in a statement that the I.R.G.C. missile strikes in Syria made it clear that U.S. sanctions against Iran’s missile program have been meaningless. “Another message of this significant action by the Islamic Revolution Guards Corps was aimed at the U.S. Congress that we pay no value to anti-Iranian bills of the Congress.”

During Friday prayer sermons today, Iranian clerics also defended the country’s missile program. Ayatollah Ahmad Khatami, the hardline Friday prayer leader of Tehran, told worshipers today that Iran would continue its missile activity in defiance of Washington.  “The missiles shot at Daesh were mid-range — you can imagine the power of our long-range missile,” he said.

This year’s Quds Day commemorations also came amid escalating tension between Tehran and Riyadh. Thus, demonstrators and Iranian officials today went beyond the usual target – the United States and Israel – and made anti-Riyadh statements as well.