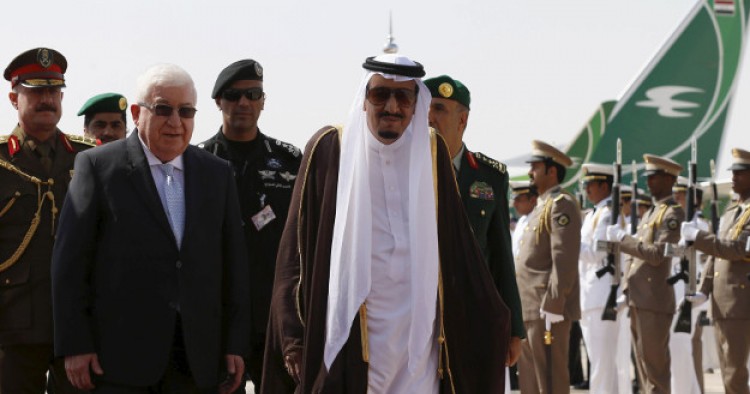 The participation of the Iraqi delegation led by President Fuad Masum at the Riyadh summit has raised a lot of questions in Tehran. “Has Iraq joined the Saudi against Iran?” was the title of a lengthy analysis piece published today in Tasnim News Agency, an outlet affiliated with the Islamic Revolution Guards Corps. According to the article, many in Iran have criticized the Palestinian and Iraqi leaders for attending and the Riyadh summit and “voting in favor of an anti-Iran resolution” despite the fact that the Islamic Republic has supported Palestine and Iraq for many years. But the I.R.G.C. outlet played down the significance of Iraq’s participation in the summit – arguing that the Iraqi president, who attended the meeting, was neither influential in Iraqi politics nor is a true friend of Tehran.

“With regard to Faud Masum’s present at the Riyadh summit, in addition to taking into consideration Saudi Arabia’s arbitrary and imposed measures at the meeting, it should not be overlooked that he [Masum] is the representative of the Iraqi Kurds. The Kurds have allied with the Americans to achieve the Kurdish independence project. And for this reason, the Hashd al-Shaabi [the paramilitary Iraqi forces known as the Popular Mobilization Forces] and the Iraqi government are considered an obstacle to them. In this regard, Iran is the main supporter of the Iraqi government and Hashd al-Shaabi. As a result, it is worth mentioning that Iran is seen an obstacle to the Kurdish project. It is therefore natural for someone like Fuad Masum, who is the representative of the Iraqi Kurds, to stay silent toward a statement that condemns Iran at a summit where all America’s allies are present.”

Comment: The Riyadh summit has generated a lot of discussion in Tehran. The Iranian media has expressed two key concerns: First, that the Trump administration is cooperating more closely with Washington’s traditional allies in the Middle East to contain Iran’s regional ambitions; and second, that Saudi Arabia managed to bring leaders of more than 50 Muslim countries to attend the summit. Iranian leaders and state-run media expressed similar concern when King Salman of Saudi Arabia traveled to Muslim-majority nations in the Asia-Pacific region earlier this year. But the participation of the delegation from Iraq – Iran’s only Shiite-majority ally in the region – at the Riyadh summit has particularly disturbed Tehran.

The latest tension between Saudi Arabia and Qatar, however, has provided a sense of relief to Tehran. The Iranian media sees the heightening tension between the two member states of the Gulf Cooperation Council (G.C.C.) as an opportunity to weaken the U.S.-Arab alliance against Iran and its proxies in the region.

The article in Tasnim News Agency also predicts that many countries that sent delegates to the Riyadh summit will not act against Iran. “Indeed, the Riyadh summit was an attempt to set up an alliance against Iran… This summit could be a cause for worry, but Saudis’ track record in building alliances alleviates this concern to some extent,” it said, adding that Oman and Pakistan did not join the Saudi coalition to fight in Yemen.