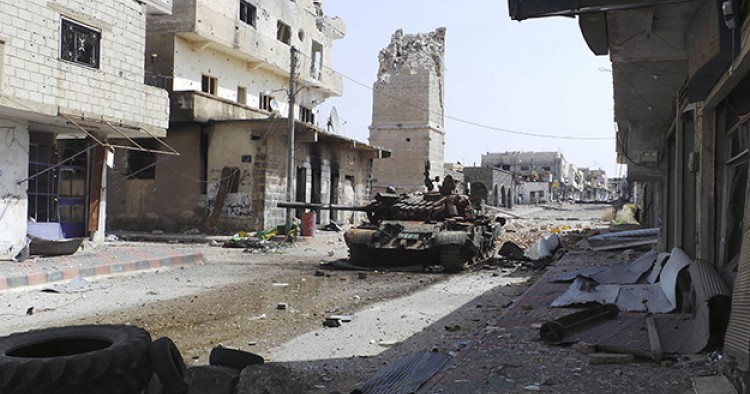 Analysis of Syrian civil war dynamics tends to draw a sharp contrast between the southern front, referring to the southernmost provinces of Deraa, Quneitra, and Suwayda, and the north. Most observers point to the south, in contrast to the north, as lacking a significant Islamic State (ISIS) presence. How true does this general assessment hold? Are radical or extremist groups much less influential in the south?

Three main groups or coalitions can be distinguished in the south: Jabhat al-Nusra; Free Syrian Army (FSA) groups, whether formally affiliated with a Western and Gulf-backed coalition known as al-Jabhat al-Janubiya (The Southern Front) or independent; and Islamist groups that envision a future Syrian state based wholly or mainly on Islamic law, but operating in a clear national framework. In general, none of these three groupings is strong enough to make advances and control contiguous territory alone.

It does appear that the Islamic State is absent or weak in the south, as opposed to in the country’s north and east. ISIS has officially publicized the creation of a “Damascus Province” branch that reaches primarily into rural southern Damascus localities such as Beir Qasab.[1] Yet despite a number of rival rebel factions[2] fighting to retake these locales, ISIS’s expansion into southern Damascus has not affected the fighting in Deraa or Quneitra Provinces.

In Deraa, particularly, claims of an ISIS presence to bolster an image of expansion to the furthest southern reaches remain unsubstantiated. For example, pro-ISIS sources on social media have been promoting the idea that a group known as Jamaat Bayt al-Maqdis al-Islamiya (the Islamic Group of Bayt al-Maqdis) is an ISIS front group, using the Twitter hashtag al-dawla al-islamiya tatamaddad ila Deraa (The Islamic State is expanding to Deraa).[3] But this notion is only based on the group’s use of a similar flag and the name Bayt al-Maqdis, which evokes the ISIS-aligned Jamaat Ansar Bayt al-Maqdis of Gaza-Sinai that has now become an ISIS-Sinai Province.

Indeed, there is no hint of an ISIS alignment in the group’s official media channels. In an official statement, Jamaat Bayt al-Maqdis al-Islamiya simply described itself as an “Islamic group…[working] to support the religion of God and make His word highest” and emphasized its lack of affiliation with any internal or external faction.[4] And one should not make too much of the similarities in the banner, as many groups in Syria have adopted a black and white banner with the first half of the Shahada and the Prophet’s seal in order to reclaim it from ISIS, which they view as having illegitimately usurped the text and image.[5]

The other claim of an ISIS presence in the south is the supposed allegiance to ISIS of the Liwa Shuhada al-Yarmouk (Yarmouk Martyrs Brigade), which is one of the more well known Free Syrian Army (FSA) branches in Deraa. This “allegiance” has been a central talking point circulated by Syria’s al-Qa‘ida affiliate Jabhat al-Nusra (JN) to justify taking on the group militarily, but nothing substantial corroborates JN’s claims. It should thus be seen as mere pretext.

In fact, JN’s failure to rout Liwa Shuhada al-Yarmouk, in contrast to the ease with which it subjugated the Syrian Revolutionaries Front (SRF) and Harakat Hazm in Idlib Province in November 2014, points to JN’s relative lack of strength on the southern front compared with its strength in Idlib.

However, in an analysis of the situation in Deraa and Quneitra, one must not focus too narrowly on the JN-FSA dichotomy. There are, as mentioned above, also many “in-between” groups that have an Islamist vision existing within a national framework. Some of these groups appear acceptable enough to Western and Gulf powers to receive weapons shipments via Jordan. One such group is Jabhat Ansar al-Islam, which first appeared in the spring of 2014.[6] It has been seen with TOW missiles,[7] weapons only given in the south to “vetted” groups; the group’s leader, Abu al-Majd al-Jowlani, is based in Amman. Jowlani said in July 2014 that he does not support the idea of a democratic state, but wants a state based on Shariah. Yet he also made it clear that he rejects the notion of an ISIS caliphate.[8] Besides Jabhat Ansar al-Islam, there are other similar Islamist movements like Harakat al-Muthanna al-Islamiya[9] and the Furqan Brigades,[10] as well as Islamic Front groups such as Ahrar al-Sham, that have played a notable role alongside JN in their pushes toward the border with Israel.[11]

In short, the rebels in the south comprise a diverse array of fighters whose relative lack of infighting and increased cooperation mean that the regime is not on the verge of any decisive gains in the area. However, the prospect of the fall of Aleppo to the regime in the north, though not imminent, is an ever growing concern among non-jihadi rebels, many of whom feel increasingly squashed between the regime, ISIS, and JN.

Though trends in the south do seem more positive than those further north, building a force in Deraa and the surrounding area in the hope of taking on ISIS is unlikely. The rebels in the area are too focused on fighting the regime, and the bulk of ISIS territory and resources lies too far away.

[1] “Removal of Signs of Shirk [Idolatry] in Beir Qasab,” ISIS Damascus Province, December 22, 2014, http://justpaste.it/ezale. By extension, a very limited ISIS presence on the outer peripheries of Suwayda Province exists, though no “Suwayda Province” has been officially declared by ISIS yet.

[2] Some rebels are fighting back to retake Beir Qasab from ISIS, e.g. the Saudi-backed Salafi quietist Authenticity and Development Front. “Some of the Battles of the Army of the Lions of the East in the Liberation of Beir Qasab,” YouTube video, 1:27, posted by Asood alshrqia, December 30, 2014, https://www.youtube.com/watch?v=b82_2qMBUzQ.

[5] Examples of this phenomenon include the Northern Storm Brigade, which fights ISIS in the Azaz district of Aleppo Province, and Liwa Thuwar Raqqa, which fights ISIS in Kobani. See Aymenn Jawad al-Tamimi, “The Factions of Raqqa Province,” Syria Comment, July 29, 2014, http://www.aymennjawad.org/15100/the-factions-of-raqqa-province.

[10] “Furqan Brigades: Movement of the Rebels towards an Outpost of al-Assad’s Gangs: Tel al-Karum: Wa‘ad al-Fitna,” Free Media Center, December 25, 2014, https://www.youtube.com/watch?v=W2uUo4ad7tQ&feature=youtu.be. The operation is part of a rebel initiative that Wa‘ad al-Fitna announced on the same day in the Quneitra countryside.