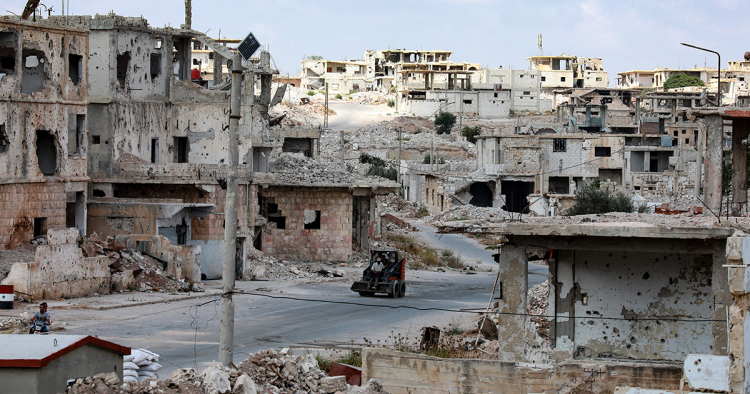 On Oct. 31, local units previously affiliated with the Free Syrian Army (FSA) launched a large-scale military operation against the al-Hafo-Harfoush group in the southern Syrian city of Daraa al-Balad. The units responsible for carrying out the operation in the Tariq al-Sad and al-Mukhayyam neighborhoods had chosen to remain in the governorate after signing reconciliation agreements with the Syrian regime under Russian auspices in July 2018.

The operation followed a suicide bombing targeting the house of Ghassan al-Akram Abazid, a former FSA leader, that left four dead and several others wounded, on Oct. 28, in Daraa al-Balad. The attack was only the latest in a string of similar operations in southern Syria conducted by the group over the past year targeting military factions affiliated with the opposition.

Who are al-Hafo and Harfoush?

Muhammad al-Masalmeh, nicknamed “al-Hafo,” and Moayad Abdel-Rahman, known as “Harfoush,” are both from Daraa al-Balad and previously served as FSA commanders in the Southern Front. Al-Hafo worked with the Syrian Revolutionaries Front (SRF) faction, affiliated with the Military Operation Center (MOC), from the beginning of military operations in the area until the regime and its Russian and Iranian allies took control of the governorate under the 2018 reconciliation agreement. For his part, Harfoush worked within the opposition factions in the al-Sad camp sector inside Daraa al-Balad.

In 2018, during the attack on Daraa Governorate carried out by the regime, Russia, and Iranian militias, the groups affiliated with al-Hafo and Harfoush fought until their last breath, even though they were on one of the bloodiest fronts in the fight against the Syrian regime. Even after the regime took control of the governorate, al-Hafo and Harfoush stationed their fighters on the outskirts of Daraa al-Balad.

Following the signing of the reconciliation agreement and the return of regime control, al-Hafo and Harfoush once again came to the fore when they rejected some of the terms of the deal concluded between the Central Committee for Reconciliation and the Syrian government’s Security Committee. Both leaders specifically refused the provision requiring them to depart for northern Syria, prompting the Syrian regime to pursue military escalation in an effort to impose it.

After three days of military operations, al-Hafo and Harfoush appeared in a video and announced they would leave Daraa al-Balad to spare civilians from further fighting and shelling. They also announced that they accepted the provision regarding their departure. A few days later, however, the two leaders reversed course, retracting this and returning to their previous positions on the outskirts of Daraa al-Balad in defiance of the Syrian regime.

The Syrian regime and its Russian ally continued to pursue al-Hafo and Harfoush through its reconciliation committee, demanding that they leave southern Syria. This demand was rejected by other stakeholders and the Higher Committee for Reconciliation, made up of the people of Daraa Governorate.

Last September, the regime’s military security branch in Daraa kidnapped members of Harfoush’s family, including his wife and five of his children, to force him to move to the north. This attempt failed and he refused to leave, choosing instead to remain in Daraa with his comrade al-Hafo.

In 2017, the FSA was carrying out attacks against the Syrian regime in what became known as the battle of “al-Bunyan al-Marsous,” which was a continuation of the battle of “Death Rather than Humiliation” in southern Daraa’s al-Manshiya neighborhood. During that period, various warehouses and vehicles belonging the factions involved were destroyed. Following an investigation, al-Hafo was arrested and charged with carrying out the operation. He was subsequently detained in the Citadel prison in Busra al-Sham. He was later released through tribal mediation before the regime took control of Daraa Governorate in 2018.

The Syrian regime was the first to accuse al-Hafo and Harfoush of being connected to ISIS, an assertion that has been repeated several times since by state media. ISIS was then represented in the south by Jaysh Khalid ibn al-Walid (the Khalid ibn al-Walid Army), which had at the time established full control over the Yarmouk Basin area.

In 2021, after the situation in Daraa al-Balad had been stabilized, bombings and assassinations began to increase again in both number and frequency in cities across the governorate. In some cases, the regime was blamed, along with its local affiliates, while in other cases ISIS was accused of carrying out the attacks. Among the victims assassinated were Adnan Abazid and Moataz Qanat. The latter was one of the FSA’s most prominent military commanders in southern Syria and was responsible for investigating al-Hafo in 2017 for involvement in the bombing of the al-Bunyan al-Marsous Operations Room warehouses. This in turn raised suspicions about al-Hafo and his perceived desire to eliminate all threads tying him to ISIS and the attacks.

In recent weeks, conflict has escalated in Daraa Governorate, specifically Daraa al-Balad, after a suicide bombing targeted former FSA leader Abazid’s house in the neighborhood of al-Arba’een, leaving four dead and others injured. An investigation revealed that the suicide bomber who blew himself up was Abu Hamza Sabina, a former member of the Khalid ibn al-Walid Army, which pledged allegiance to ISIS. It also uncovered that the suicide bomber was living in the area under the protection of al-Hafo and Harfoush, confirming their relationship with ISIS and bringing them back to the forefront of the investigation.

Audio recordings of al-Hafo and Harfoush subsequently emerged, of previous operations they had conducted for ISIS, in cooperation with Osama al-Zeer, ISIS’s most important security official in southern Syria. These included the bombing of the Jaysh al-Islam camp in the city of Naseeb in 2017, in which more than 25 members of Jaysh al-Islam were killed; the bombing of the warehouses of the al-Bunyan al-Marsous Operations Room in Daraa al-Balad in 2017; as well as assassinations and attempts to eliminate important FSA leaders in Daraa, including the bombing of former FSA leader Abazid’s home.

Conflicts and mediation to reach solutions

Battles have been continuing between local factions close to the Central Committee in Daraa and the al-Hafo-Harfoush group accused of being connected to ISIS. Local factions recently managed to take control of the Tariq al-Sad neighborhood in Daraa al-Balad, known as a focal point for groups associated with ISIS. Nevertheless, al-Hafo and Harfoush were able to make their way out of the neighborhood with Yousef al-Nabulsi, considered ISIS’s most important leader in southern Syria.

Meanwhile, battles erupted in the neighborhoods of Daraa al-Mahatta and al-Arba’een, resulting in the death of more than 10 members of local factions, in addition to several civilians. Eight members of the al-Hafo-Harfoush group were killed as well, one of whom was Ahmed Harfoush, the brother of Moayad Harfoush. Other groups linked to ISIS continue to be pursued elsewhere in Daraa Governorate, especially in Jasim and al-Yadoudah in the countryside.

The battles prompted Daraa notables to put forward an initiative to resolve the situation, under which al-Hafo and Harfoush would hand themselves over to a local third party, leaving Daraa city until the investigations and trial procedures against them were completed, with a particular focus on their association with ISIS and involvement in the operations referenced in the recordings.

According to Sheikh Faisal Abazid, a member of the Central Committee in Daraa Governorate and the preacher at al-Omari Mosque, al-Hafo and Harfoush rejected the initiative. This opportunity would not last long, he said, stressing that “the next way out is to eliminate these groups and get rid of them.”

Sheikh Abazid added, "There are parties trying to portray the situation as a clan conflict between the Abazid clan and the Masalmeh clan, to which these two militants belong. The truth, however, is a conflict between the people of Daraa and criminals accused of killing dozens in the governorate during past years."

As local factions insist that the wanted be handed over for prosecution, the al-Hafo-Harfoush group faces a stark choice: either surrender, which is unlikely, or continue fighting until their last breath, which seems more plausible.

The hidden role of the regime

In recent years, the regime has played a major role in driving the activity of ISIS cells in southern Syria, especially in Daraa Governorate. This began in early 2019, when the Syrian regime released, at separate intervals, around 200 members of the Khalid ibn al-Walid Army who had previously been arrested by the regime when it controlled the governorate.

Among those released by the regime in 2019 who went on to contribute to the resurgence of ISIS activity in southern Syria was Maher Kanhoush from the town of Jabab, north of Daraa. As an ISIS leader, Kanhoush used to hold an important position in the group’s Hisba Bureau, or religious police. The regime also released Youssef al-Nabulsi, aka Abu al-Bara, the general emir of ISIS security cells outside the areas of the Yarmouk Basin previously controlled by ISIS through the Khalid ibn al-Walid Army. Abu al-Bara is currently responsible for leading the al-Hafo-Harfoush group’s military operations.

Mohammed Hassan is a university student at the Faculty of Law, Department of International Law. His writings focus on the regions of northern and eastern Syria, especially extremist Islamic groups and tribal societies.