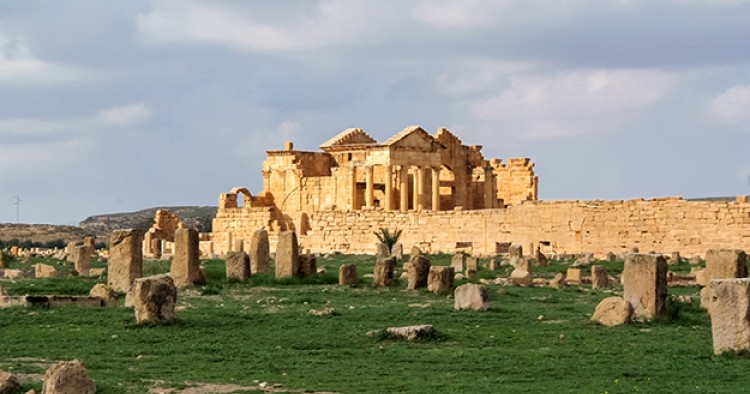 Looting and trafficking of antiquities in the Middle East and North Africa has reached unprecedented levels since the rise of ISIS. In a region with tens of thousands of archaeological sites, antiquities are as easily accessible as oil for terrorist groups controlling such archaeologically rich territory. ISIS militants loot and sell movable artifacts within their reach—antiquities have been found in ISIS strongholds in Syria, Iraq, and even Libya. However, this is not the only way cultural heritage is exploited to further the group’s efforts—what cannot be moved is often destroyed, as seen in Nineveh (Iraq) and Palmyra (Syria).

When U.S. Special Forces raided the terror stronghold of a senior ISIS official in 2015, a Tunisian named Fathi Ben Awn Ben Jildi Murad al-Tunisi, they found a hoard of information about ISIS’ inner workings. Among their findings was evidence of a highly organized antiquities trafficking scheme. Abu Sayyaf’s compound not only yielded looted antiquities, but a trove of documents, permits, receipts, and computer files revealing how ISIS had made antiquities trafficking part of its institutional infrastructure.

This is not the first time terrorist groups have controlled areas of the MENA region, nor is it the first time a terrorist group has been known to engage in cultural destruction, yet the region has never before witnessed the widespread deliberate destruction of cultural heritage sites on this scale. So how did a group that came to power in 2014 begin engaging in this cultural terrorism so quickly? To understand that, we have to follow the background of the fighters, beginning with the largest foreign source: Tunisia.

More than 6,000 ISIS fighters hail from Tunisia—the nation with the single highest segment of foreign fighters to date. Tunisia is also considered the birthplace of the Arab Spring where Mohamed Bouazizi’s self-immolation inspired region-wide protests to overthrow dictators and oppressive governments in 2011. Following the ousting of the Ben Ali regime, Tunisia was largely seen as on track to be one of the success stories of the Arab Spring and was widely hailed as the model for countries to look to in their paths toward democracy. Yet, what was less reported was the cultural firestorm brewing under the surface, widespread deliberate destruction of cultural and religious sites by Salafists and other radical Islamic extremists occurring throughout the country. In January 2013 alone, radical Salafists targeted at least six cultural heritage sites across Tunisia. Among the sites attacked was the famous Mausoleum of Sidi Bou Said, which was destroyed by arson—a tactic of choice in the destruction of Sufi cultural heritage sites in Tunisia. This allowed these Salafists to establish their radical credentials and publicize their presence through the propaganda and publicity generated by these actions.

The hardline Salafists, long under the strict control of the Ben Ali regime, had previously fled to countries like Afghanistan (where the Taliban famously destroyed the Bamiyan Buddha in 2001), Iraq, and Libya. In these countries, the Tunisian Salafists became radicalized, later resurfacing after the fall of the regime to seize on the opportunity to exercise their extremism free from government control and repression.

From the beginning of the Arab Spring in 2011 through early 2014, Salafist extremists reportedly destroyed more than two-dozen cultural heritage sites in Tunisia. The #CultureUnderThreat Map by the Antiquities Coalition shows that the peak of this destruction took place in the late winter and spring of 2013.

Tunisia faced the widespread targeting of heritage well before this tactic of cultural destruction became the ‘atrocity trademark’ of ISIS in the territory controlled by the self-declared caliphate.

By the summer of 2013, the Tunisian government began a major crackdown on Islamists, and many once again fled the country. The locations of choice for terrorists are often where they can more easily thrive in the security vacuum caused by severe instability or conflict. In 2013 and 2014, those locations were Iraq and Syria.

Tunisia’s illicit antiquities trade has also thrived in the instability following the Arab Spring. In 2013, around the same time as the rise in cultural destruction, a 5th century B.C.E. marble statue from the Carthage Archaeological Museum was stolen—it was recovered in 2015 and the suspect was arrested. In March of this year, Tunisian authorities foiled an attempt to smuggle a 15th century Hebrew Torah to Europe to be sold at auction. Tunisian officials stressed at the beginning of the year their concerns about the connection between antiquities trafficking and terrorism.

Tunisia’s Mediterranean coastline puts it within an arm’s reach of Western Europe, one of the largest art and antiquities markets in the world, and its shared borders with Algeria and Libya make it a prime route for trafficking across North Africa.

Tunisia’s role as a trafficking highway is so significant that smuggled goods represent roughly half of Tunisia’s bilateral trade with Libya, according to the World Bank. Libya has an antiquities trafficking problem of its own, and is also currently facing a terror insurgency, a point that can only serve to further feed the pipeline of cultural material making its way out of North Africa through Tunisia.

With antiquities trafficking already a growing crisis in Tunisia, the return of ISIS fighters poses an even greater risk to the cultural heritage of Tunisia and its North African neighbors.

Tunisian authorities must act now to coordinate with their regional and international counterparts in order to keep up with the looming wave of ISIS fighters returning home and seeking new sources of funding. Likewise, Europe and the United States should be prepared to take action as their markets feed a trade that contributes to the ongoing cycle of instability in the MENA region. Unlike years past, today we have knowledge of the capabilities of groups like ISIS, which offers an important opportunity to proactively address these crimes rather than reacting to the losses after they have happened.