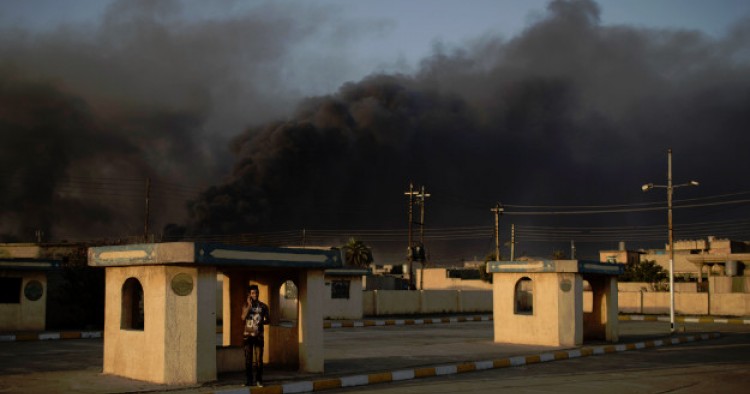 A prominent Iran-backed Iraqi militia commander has warned peshmerga forces loyal to the Kurdish Regional Government (KRG) to withdraw from the northern Iraqi town of Sinjar and stressed that the Popular Mobilization Forces (PMF) will not allow any parts of Nineveh Province to be incorporated into the Iraqi Kurdistan Region. “Popular Mobilization Forces will spare no effort to confront the expansionist agenda of Masoud Barzani, the head of Iraqi Kurdistan Region, in Nineveh Province and other Iraqi areas,” Jawad al-Talibawi, a spokesman for the armed wing of Asaib Ahl al-Haq, said on Monday in an exclusive interview with Fars News Agency, which is affiliated with the Islamic Revolution Guards Corps (I.R.G.C.). Asaib Ahl al-Haq is one of powerful PMF Shiite militia groups that have close links with the I.R.G.C.

Moreover, Talibawi claimed that intelligence agencies of Qatar, Saudi Arabia and Turkey have joined hands to dismantle the PMF in order to prepare the ground for Iraq’s disintegration. According to Fars News Agency, Turkey hosted 30 Iraqi Sunni leaders last week to discuss the role of the Iraqi Sunni community after the defeat of the Islamic State, reconstruction of Sunni regions, and Iran’s influence in Iraq. “Turkey, as the host of the meeting, has the support of not only Saudi Arabia and Qatar but also America in this regard. There is a consensus between America, Turkey, Saudi Arabia and Iraqi Sunnis about confronting Iran’s influence and defeating Hashd al-Shaabi (PMF),” the outlet added. Talibawi warned that PMF “will not sit idle in the face of such suspicious meetings.”

Comment: As the Islamic State’s grip on power in Mosul is loosening, Iraqi political and armed factions as well as their regional backers have intensified their race for control and dominance in the region. As Talibawi’s remarks indicate, the Sinjar region may prove to be a flashpoint for proxy conflicts once the Islamic State is defeated in Mosul and surrounding areas – particularly between factions supported by Iran and Turkey. Rival Kurdish groups – Iraqi Kurdistan Democratic Party (KDP) and Kurdistan Workers’ Party (PKK) – are already engaged in a deadly conflict in Sinjar. The PKK has conducted attacks inside Turkey for a long time, and Ankara has made it clear that it will not tolerate the presence of PKK close to its border and will intervene militarily if needed. Such a move will most likely place Turkey and its Iraqi allies in a direct confrontation with Iran-supported militia groups that have considerable influence in western Mosul. The inter-Kurdish clashes in Sinjar may also sour relations between Iran and the Kurdish Regional Government (KRG), which intends to bring Sinjar under its own authority.