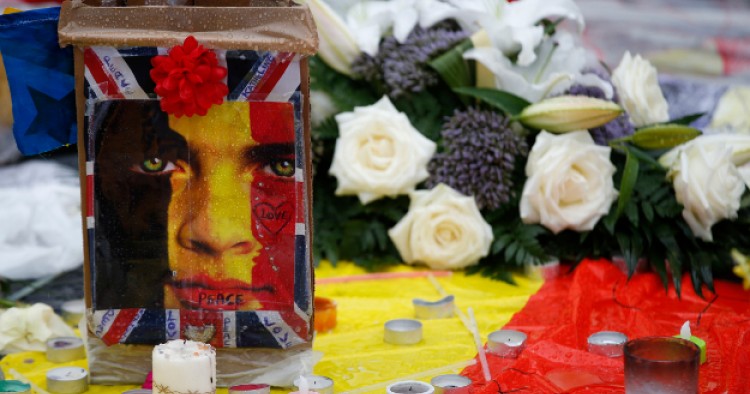 “The ‘Islamic State’ Rocked Crusader Europe Again. Hundreds of Deaths and Injuries as a Result of Martyrdom Operations in Brussels,” read the headline of the Islamic State’s (ISIS) Arabic-language newsletter al-Naba’ on March 21, 2016. There were not much details about the terrorist bombings, but they certainly follow a pattern established since early 2015. “Do not look for specific targets. Kill anybody,” said Boubaker Hakim, an ISIS commander of French-Tunisian origins, in an interview initially published in March 2015 by ISIS' French-language magazine Dar al-Islam.

Before 2015, the geo-strategy of ISIS primarily focused on capturing territory in the Middle East, cleansing and controlling it, and then proto state-building within it according to its ideological vision. Then, ISIS would expand into closer territory by attacking nearby enemies, who ranged from al-Qaeda’s Jabhat al-Nusra and Syrian revolutionary forces to the Assad regime and the Iraqi government. This focus started to gradually change from the summer of 2014, specifically after U.S. airstrikes began in August of that year.

ISIS affiliates and sympathizers have conducted no less than 30 alleged plots and terrorist attacks against Western citizens and interests since October 2014. This is compared to only two alleged plots and one attack before that date: the London “Mumbai” alleged plot, which was cleared by a U.K. court, in October 2013; the French Riviera alleged plot in February 2014; and the Brussels Jewish museum attack in May 2014. Although the latter attack was committed by a militant who was trained in ISIS camps, the ISIS connection in most of these attacks/plots was declared support of the organization and not a directive form a high-level ISIS commander.

That has changed. In the last three issues of Dabiq, the focus was on inciting attacks in the West, compared to earlier issues which focused on legitimating ISIS rule, de-legitimizing rivals and enemies (including al-Qaeda and the Taliban) and calling on Muslims to migrate to ISIS-controlled territory.

For example, the 11th (August 2015) and 12th (November 2015) issues of Dabiq bore the respective headlines, “From the Battles of Al-Ahzab to the War of Coalitions” and “Just Terror.” The former was comparing the U.S.-led coalition against ISIS in 2014-2015 to a tribal coalition formed by pagan Arab tribes and Jewish clans against the Prophet Muhammad in 627. The latter was justifying the November 2015 terrorist attacks in Paris.

Today, the ISIS leadership sees benefits in directly striking the West. The leadership has multiple aims, which includes deterring the West from attacking the territories it controls, avenging the over 20,000 deaths in its ranks and the destruction of facilities that resulted from coalition airstrikes, furthering the alienation of Western Muslims, and hence capitalizing on that via recruitment and mobilization. The ability to launch terror attacks in the West, despite being under heavy bombardment, displays a strength of ISIS that also serves the latter purpose.

However, that terror strategy is not new. Al-Qaeda and other terrorist organizations have deployed similar objectives and tactics before. Not only were they unsuccessful, but also, in some cases, such attacks marked the beginnings of their ends. They ranged from far-right, neo-fascist non-state actors like the Italian New Order in the early 1960s to repressive regimes such as those of Saddam Hussein and Muammar al-Qaddafi. The latter’s terror campaign included bombing nightclubs in Berlin (1986) and blowing up civilian airplanes over Scotland (1988).

But some differences exist in the case of ISIS, most importantly the dedicated capacity to mass-murder, the sustainability of that capacity and the de-centralization of the terror campaigns. In terms of capacity and sustainability, roughly 6,000 European foreign fighters have left the E.U. to join the Syrian armed conflict. Of those, about 600 French citizens are believed to be fighting for ISIS out an overall of 1,700 Frenchman believed to have left to fight. Belgium has the highest numbers of foreign fighters in Syria per capita, compared to any Western nation. They are estimated to be over 500 (181 has returned to Europe by one estimate).

Within these sets, the exact number of ISIS trained-and-returned European fighters is still unknown. Abdelhamid Abaaoud, the ISIS ringleader who co-masterminded the Paris attacks, claimed the he was back in Europe among 90 ISIS trained terrorists. Back in the ISIS strongholds, the organization allegedly trained 400 to 600 fighters for “external operations.” In late 2015, those were given more complex and prolonged training in urban guerilla warfare, manufacturing of improvised explosive devices, surveillance, countering security measures, and forgery. Thus, the terror capacity is well-founded. The sustainability of terrorist operations in different locations is also key for ISIS’ strategy, in order to drain Europe both financially and psychologically. So far, Turkey was hit the hardest followed by France. But the list of hard-hit countries can certainly expand, and ISIS will no doubt seek to spread its terror throughout the continent

Europe needs to maintain unity among its democracies and develop a common security strategy to deal with the security challenges posed by ISIS. Disunity and fragmentation does not only serve ISIS’ publicly declared and celebrated objective of “weakening European cohesion” and fostering “tensions between France and Belgium over intelligence failures,” but it also undermines both societal resilience to terrorism and strategic security cooperation.