ISIS’s charm offensive toward al-Qaeda in the Islamic Maghreb 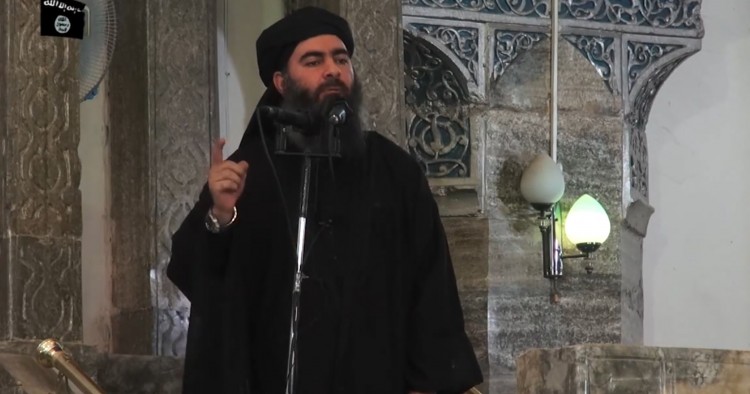 On Nov. 13, 2014, Abu Bakr al-Baghdadi, ISIS’s new self-proclaimed caliph, announced its expansion beyond Syria and Iraq, where it had become the dominant jihadi group, to include new affiliates in Saudi Arabia, Yemen, Egypt, Libya, and Algeria. In the case of Algeria, however, it had strong local competition. Al-Qaeda in the Islamic Maghreb (AQIM) had operated in the area for more than a decade and was by far the leading jihadi group in North Africa and the Sahel region, thus making it an attractive partner for ISIS’s expansionist ambitions. AQIM would not be swayed away from al-Qaeda, however –– but not for lack of trying.

A secret letter recently obtained by this author through an inside source sheds light on ISIS’s efforts to persuade an al-Qaeda affiliate to jump ship, abandon its allegiance to al-Qaeda leader Ayman al-Zawahri, and join al-Baghdadi’s ranks. The letter, dated Dec. 4, 2014, is authored by Abu Ubaydah Abd al-Hakim, a member of ISIS’s shura (consultative) council, and addressed to the emir of AQIM, Abdelmalek Droukdel (aka Abu Musab al-Wadoud). The letter is clearly part of a correspondence between the two senior jihadists, and although we only have this one letter, it tells us a lot about their previous exchanges and AQIM’s main criticisms of ISIS, and offers a rare glimpse into the group’s efforts to convince al-Qaeda affiliates to join its new caliphate.

At the time the letter was written, ISIS had already established its caliphate. In the speech declaring it, the late spokesman Abu Muhammed al-Adnani announced that all other groups in the territories where the caliphate expanded would become null. Thus, when in November 2014 al-Baghdadi proclaimed the expansion to Algeria, among other places, it was undoubtedly in the hope that it could sway AQIM away from al-Qaeda and convince it to pledge allegiance (bay’ah) to al-Baghdadi instead. The job of approaching AQIM’s leader, Droukdel, fell to Abd al-Hakim, about whom little appears to be known other than that he served on the shura council for at least a year, in 2014-15, and was responsible for outreach beyond the Levant. A year later, in December 2015, it was similarly Abd al-Hakim who was in charge of managing dissent within ISIS’s Yemeni province when a group of ISIS members complained about their governor.

AQIM had already criticized and dismissed the caliphate at the time of the correspondence between Abd al-Hakim and Droukdel. In fact, it was the first al-Qaeda affiliate to do so, in a statement released on July 4, 2014, the same day al-Baghdadi declared the caliphate’s establishment in Mosul. In the statement AQIM criticized the declaration, questioning ISIS’s legitimacy and position on other jihadi authorities such as the Taliban and al-Qaeda. AQIM also reiterated its pledge of allegiance to al-Qaeda leader al-Zawahri and called on senior jihadi figures to settle the conflict. Other al-Qaeda affiliates like al-Qaeda in the Indian Sub-Continent and al-Qaeda in the Arabian Peninsula would not publish official rebuttals of the caliphate until September and November, respectively. But AQIM’s quick rejection did little to prevent ISIS from launching a charm offensive toward Droukdel and his fighters.

Abd al-Hakim’s letter should be considered an exercise in selling the caliphate to sympathetic jihadists. His focus is on the caliphate’s success in Syria and Iraq and its basic legitimacy, which was a main point of contention with other jihadists in 2014. Abd al-Hakim informs Droukdel that the new Islamic state is flourishing and that Islamic law (shari’a) is implemented across its territory. “Every single pillar and requirement of caliphate has been fulfilled,” he tells the AQIM leader. It becomes clear from the letter that Droukdel has expressed doubts about this before, and Abd al-Hakim invites him to send a delegate to confirm that the caliphate is indeed on the right path.

From Abd al-Hakim’s letter we also learn that the AQIM leader has raised concerns about three specific issues: the election of a caliph without the agreement of the qualified authorities (ahl al-hall wa-l-aqd), the issue of consolidation (tamkin) as a requirement for the caliphate’s establishment, and the breaking of the pledge of allegiance that AQIM already has to al-Zawahri.

Sympathetic voices within al-Qaeda have long problematized that the decision to establish the caliphate was made without consulting the qualified authorities. ISIS claims it consulted people of authority locally, but time and again it has refused to name them. In response, Droukdel lists six senior ideological figures that he believes should be counted as ahl al-hall wa-l-aqd: Abu Muhammed al-Maqdisi, Abu Qatada al-Filistini, Sulayman al-Alwan, Abu al-Walid al-Ghazi, al-Zawahri, and Mullah Omar.

Abd al-Hakim obviously takes Droukdel’s message seriously as he responds by refuting each of them. For al-Maqdisi and Abu Qatada, he argues that they have long been critical of ISIS, suggesting they would be too biased to rule on its legitimacy. Flattering Droukdel, he writes, “We deem you [AQIM] far above to be saying the same as Abu Qatada al-Filistini, who did not only describe us as Khawarij [a historical extreme Islamic sect], he asserted that we are the dogs of hellfire, and that the state –– that was built on shreds, blood, and honor of believers in Tawhid [monotheism] and that has dazzled and giddied the unbelievers East to South –– is a bubble state.”

On al-Maqdisi he adds that one cannot trust a person who has never fired a weapon in the name of Allah. On al-Alwan he argues that the fact the Saudi scholar is in prison implies he has no free will, while on al-Ghazi he says that ISIS is not really familiar with him aside from a few online writings. This is either a show of ignorance or a provocation because al-Ghazi has been a top-tier jihadi scholar for many years, spending his early days in London as a protégée of Abu Qatada, before relocating to the AfPak area to become al-Qaeda’s in-house scholar. At some point he was imprisoned by the Pakistanis, but in 2017 he was released and re-settled in Turkey. Mullah Omar of the Taliban, Abd al-Hakim claims, has not been seen alive for more than 11 years, while according to ISIS al-Zawahri is the main protagonist of the intra-jihadi conflict and cannot be trusted to decide on a caliph.

And this was not the first time ISIS had criticized these figures. Its young Bahraini scholar, Turki al-Binali, wrote refutations of al-Maqdisi and Abu Qatada, while another senior ISIS leader, Abu ‘Abd al-Rahman al-Shami, dedicated a 120-page book to pulling apart Abu Qatada’s work “Cloak of the Khalifa.” To support his argument that the senior jihadists Droukdel mentioned have no real power, Abd al-Hakim writes that they were not capable of preventing the creation of the caliphate despite trying. Instead, he claims, ISIS convened people it considered knowledgeable, but does not name them.

Abd al-Hakim comments more briefly on the issues of territorial consolidation and the pledge of allegiance. To him ISIS’s territorial control is clear and not only does it control land, it also rules it according to shari’a. To illustrate ISIS’s tamkin, he relates that one can travel from Aleppo to Diyala and still be in territory controlled by al-Baghdadi. For individuals and groups previously loyal to al-Qaeda, one of the major issues has been the legitimacy of potentially breaking their pledge of allegiance. To address this, Abd al-Hakim turns the argument around, writing “concerning your argument that the bay'ah shall not be broken, we would say that this is valid prior to the caliphate. Now that we have true caliphate without the slightest shari’a fault in itself or its imamate, breaking the bay'ah has become mandatory according to the shari’a.” Thus, the actual impermissible act would be not to break their allegiance to al-Zawahri and instead extend it to al-Baghdadi.

The argument made by competing jihadi groups is that ISIS has been the aggressor in the intra-jihadi conflict and that the establishment of the caliphate has only exacerbated tensions. Droukdel follows this line of argument, but unsurprisingly Abd al-Hakim objects, claiming that the caliphate is here to unite Muslims. Acknowledging that the ongoing conflict is damaging, however, he invites Droukdel to mediate, writing, “So dear brother, if you wish to mediate for reconciliation and resolution of conflicts amicably and based on compatibility and conciliation between all the mujahedeen unanimous on this imam under this caliph, then you are the right mediator.” At this point ISIS had rejected all reconciliation efforts between jihadi factions, arguing that a judicial process to settle the conflict should take place under the auspices of its state apparatus and not between a state and a group, as they framed it. Unsurprisingly, Droukdel did not take them up on this offer.

In a final effort to convince Droukdel and his group to join ISIS, Abd al-Hakim writes that “the defamation and invalidation of its legitimacy by al-Qaeda shall not render it [the caliphate] illegitimate without a legal reason based on shari’a. This is the core issue, and we do love you brothers and would love for our mujahedeen brothers and our ummah to be united under one word, therefore, the commander of believers has written to you to follow the crowd, overcome the differences, and heal the rift.”

But as we now know AQIM would not be swayed by Abd al-Hakim and his offer. In fact, half a year after the correspondence, a senior AQIM member, Abu Aḥmad Abd al-Karim al-Jaza’iri, authored a long critique of ISIS, once again stressing its illegitimacy. For al-Qaeda and al-Zawahri it was extremely important that affiliates like AQIM remain loyal. Droukdel’s refusal of Abd al-Hakim’s offer was thus not just an important boost at a time when al-Qaeda was struggling, but it likely saved the group as we know it. Had one of al-Qaeda’s affiliates joined ISIS, other affiliates would likely have followed suit, starting a process that could have meant the end of al-Qaeda.