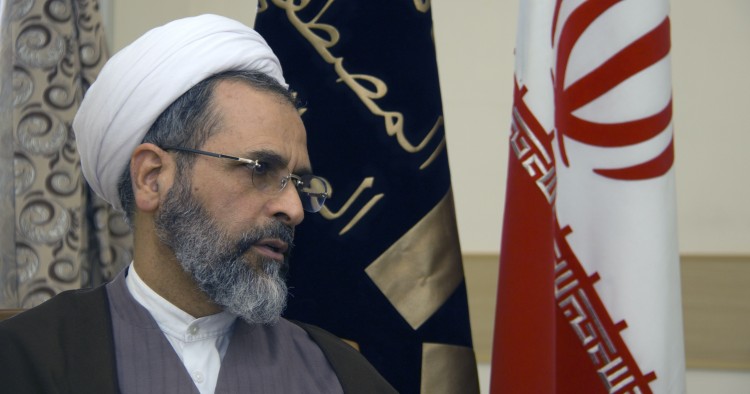 The first-generation of Iran’s militant clerics, who took control of the country after the Iranian revolution of 1979, are all either dead or dying off. Speculation about the process of succession is rife and is not only limited to who will capture the ultimate prize, the seat of the supreme leader. In a series of articles, the Iran Program at the Middle East Institute will identify and assess key second-tier officials in the Islamic Republic who seem to have good prospects to make it all the way to the top.

Watch this man, he could be Iran’s next leader

Outside of clerical circles in Iran, the name of Alireza Arafi is hardly well known, but he deserves more attention. His entire career has been shaped by appointments given to him by Supreme Leader Ayatollah Ali Khamenei. In fact, Arafi may even be a candidate to succeed Khamenei when the day comes.

Born in 1959, Arafi comes from a clerical family from the historic town of Meybod in the central Iranian province of Yazd. In Iranian circles the Arafis said to have been Zoroastrians who converted to Islam in the 19th century. Arafi’s father, Ayatollah (Sheikh Haji) Mohammad Ibrahim Arafi, is typically depicted in Iranian state media as someone who was close to the late founder of the Islamic Republic, Ayatollah Ruhollah Khomeini.

However, the alleged close personal connection between Khomeini and the elder Arafi appears to have been deliberately exaggerated in the years since Khamenei became supreme leader in 1989. The question is: Why?

The most likely reason is that it is part of a calculated effort to enhance the regime credentials of the younger Arafi, Alireza. For example, today the Iranian state narrative speaks of the town of Meybod having been “mobilized for [Khomeini’s] revolution by the Arafi family.” However, the simple truth is that this relatively small town played no significant role in the 1979 revolution.

There is ample evidence that after Khamenei came to power as supreme leader in 1989, the Iranian regime set out to systematically elevate the Arafi family name. In 1969, when Alireza was only 11 years old, he moved to Qom to further his religious studies, which he had begun under his father back in Meybod. In Qom, most of his senior religious instructors — such as Ayatollah Ali Meshkini — would eventually go on to become senior members of the new regime after the 1979 revolution. Other key mentors for Alireza at the hawza (seminary) in Qom were Ayatollahs Mohammad Fazel Lankarani, Mehdi Haeri Yazdi, Hossein Vahid Khorasani, and Abdollah Javadi Amoli.

Through the years, his studies eventually secured him the title of mujtahid, which is the rank he holds today, and his areas of expertise reportedly include Islamic jurisprudence (fiqh) and philosophy. He is said to be fluent in Arabic and English and has published 24 books and articles. He is also reported to be technology savvy.

Khamenei sees him as a capable foot solider

At the time of the revolution in Iran in 1979, Alireza was only 21 years old and was too junior to play any significant role. It is therefore not accurate to label him as part of the “first-generation revolutionaries.” In fact, throughout the 1980s the young Arafi did nothing to really distinguish himself from the many other young clerics that had joined the ranks of the Islamic Republic.

His name began to rise in prominence, however, after Khamenei became the supreme leader in 1989. Within a few years, Khamenei had the necessary confidence to appoint his own friends and like-minded acquaintances to key position within the state machinery. In the case of Arafi, he was first appointed to be the Friday prayer leader in his hometown of Meybod in 1992. He was just 33 years old at the time, a very young age for such an appointment and a clear sign of Khamenei’s trust in him.

In the following years, Khamenei appointed Arafi to many other official roles, including, in 2015, as the Friday prayer leader in the city of Qom itself. In hindsight, it is clear that Arafi was part of a group of younger clerics — he is about 20 years younger than Khamenei — that the new supreme leader carefully handpicked for senior management roles in the Islamic Republic after taking over the top job in 1989. For Khamenei, these men are his loyalists that will advance his agenda and in return they enjoy his patronage.

One of the many roles that Arafi has occupied, which both exemplifies Khamenei’s trust in him but also the supreme leader’s vision about the future of Iran and the regime, is that of chairman of Al-Mustafa International University in Qom. This university, which was officially established in its current format in 2009, is the brainchild of Khamenei, but Arafi was reportedly instrumental in designing the practical aspects, an effort that Khamenei has repeatedly praised.

The university has a twofold mission:

Al-Mustafa University was the result of the consolidation of a number of existing initiatives that since 1979 have focused on educating non-Iranians to become Shi’a clerics. However, as Khamenei matured politically and as older senior ayatollahs died (who had historically been independent from the state), he set out to streamline, modernize, and impose central control over the activities of the seminaries in Qom and elsewhere in the country in places such as Mashhad and Esfahan. This was both extremely sensitive — as many existing ayatollahs resented relinquishing their financial and theological independence to the Office of the Supreme Leader — but also paramount to Khamenei’s vision of cultivating a modern bureaucratic clerical class that can act as the political commissars of the regime.

That Arafi was chosen to lead this major new initiative so near to Khamenei’s heart speaks volumes about his closeness to the supreme leader. As Khamenei put it to Arafi when Al-Mustafa University was launched, “Even if you achieve 30 percent of what you have set out, then it is a success.” Today, Al-Mustafa University has many dozens of seminaries and religious centers both in Iran and abroad. By July 2016, Khamenei had appointed Arafi, then age 57, as head of all seminaries nationwide. In July 2019, Khamenei appointed him to the powerful 12-man Guardian Council, the Islamic Republic’s ultimate filter that can veto any government policy or political candidate. Arafi is shortlisted to succeed the serving head of the Guardian Council, the 93-year-old Ahmad Jannati, who was appointed by Khamenei back in 1992.

Again, this appointment is a reflection of the deep trust that Khamenei has in Arafi. Context is important here. As soon as he was politically free to do so beginning in the early 1990s, a few years after he succeeded Ayatollah Khomeini, Khamenei has systematically centralized political control over the Shi’a clergy. As part of this effort, he has promoted a handful of key individuals as clerical bureaucrats that can implement his vision but also to export the ideology of the Islamic Republic. Arafi is one of the prominent members of this elite bureaucratic class that Khamenei has carefully cultivated for nearly 30 years now.

Khamenei’s repeated appointments of Arafi to senior — and often strategically sensitive positions — show that he has a great deal of confidence in his bureaucratic abilities. In addition, by most accounts, Arafi has proven that he is of the same mindset as Khamenei about the future trajectory of the Islamic Republic.

On the international front, as with Khamenei, Arafi sees the principal enemy of Shi’a Islam to be the Saudi version of Islam, which the Iranian regime refers to as “Wahhabism.” However, Arafi’s track record has not just been about consolidating the political role of the pro-regime clergy in Iran, but also about expanding the regime’s ideological message around the world. Arafi spent years as one of the central figures working to internationalize the Islamic Republic’s agenda, as his roles as the head of all seminaries in Iran and the head of Al-Mustafa University attest.

According to Arafi’s statements, there are some 40,000 non-Iranian seminarians studying in Iran today, and an additional 80,000 have graduated from Al-Mustafa University over the years. His political philosophy, as he put it, is that “Seminaries [in Iran] need to be from the people, in solidarity with the downtrodden, be political [Islamist], revolutionary, and international [in approach]. This clearly amounts to the mindset of an ideologue. While Arafi’s political commitment to the Islamic Republic is unquestionable and his bureaucratic abilities are highly rated as he continues to serve with the blessing and approval of Khamenei, his track record as a politician is far less certain or predictable.

As an example, he failed in an attempt to win a seat in the February 2016 elections for the Assembly of Experts. This was by all accounts a fairly humiliating loss for someone of his age and political background. He was one of 33 candidates for the district of Tehran and ran on the hardline list of the “Society of Seminary Teachers of Qom.”

Prior to the elections, Arafi had distanced himself from reports that he had also signed up to run as a candidate on a list close to Ayatollah Hashemi Rafsanjani, known as the list of the “People’s Experts.” Arafi clearly wanted to stay close to the hardline camp even though the People’s Expert list was predicted to do much better in those elections. It did, and Arafi, who had had the option to run as a candidate on both lists to improve his chances of election, chose out of principal to stay away from those associated with Rafsanjani, whose relationship with Khamenei was in a free fall at the time.

Arafi’s election loss in February 2016, however, did not stop him from continuing to rise through the ranks of the regime. At the same time as his defeat at the ballot box, Khamenei increased his responsibilities by giving him the added job of overseeing all religious centers in Iran. Arafi has also become more of a public figure in recent years. His official duties have included meeting foreign officials, visiting earthquake-hit areas in the west of the country, and even speaking about national security issues. He has been vocal about his support for the military and the Revolutionary Guards, stating that Iran’s determination to build up its military defenses is unstoppable. In another notable instance of political showmanship, Arafi wrote an open letter to Grand Ayatollah Ali al-Sistani in Iraq congratulating him on the defeat of ISIS in Iraq.

As with everything else in Arafi’s political career, the latest increase in his public profile and activities appear to be deliberately orchestrated and staged by the Office of the Supreme Leader. However, with greater public and media presence also comes greater scrutiny and likelihood of mishaps. In one such case, Arafi’s bizarre claim that 50 million people around the world have become Shi’a thanks to Al-Mustafa University became a source of ridicule.

Overall, Arafi appears to be on a steady, carefully coordinated, and so far largely trouble-free upward trajectory. His name will probably become more frequently mentioned as a possible successor to Khamenei in the foreseeable future. He is definitely someone who can transform himself from a trusted and capable technocrat that largely operated behind the scenes to a political figure that possibly can fill the big shoes of Khamenei himself. While such a process of transformation might still be in its early stages, it will require one critical ingredient to eventually succeed: the continued commitment of Khamenei to promote Arafi’s political rise. For one other certainty is that Arafi was made by and therefore entirely beholden to Khamenei and has no independent political base of support of his own other than supreme leader.

Alex Vatanka is a senior fellow and the director of the Iran Program at the Middle East Institute. His forthcoming book is The Battle of the Ayatollahs in Iran: The United States, Foreign Policy and Political Rivalry Since 1979 (2021). You can follow him on Twitter @AlexVatanka. The views expressed in this piece are his own.