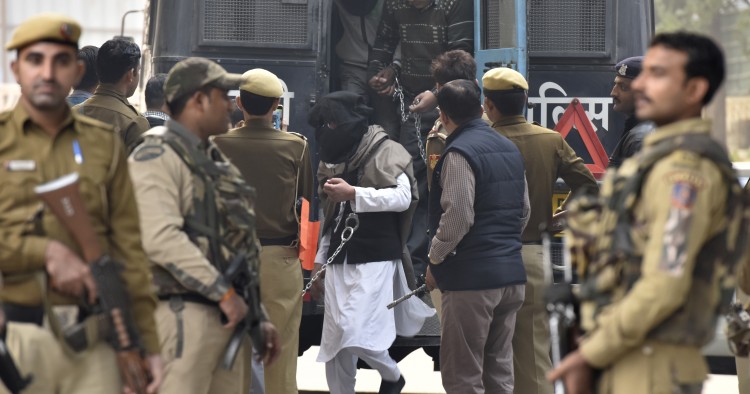 What IS’ Recent Activities in India Reveal

The Islamic State (IS) is generally considered to be a very modest threat to Indian national security when compared to Kashmiri separatists, Naxalites, and the North East insurgencies. Yet, paradoxically, of all such violent non-state actors it has been IS that has garnered the most national attention in recent years.

In January 2019, IS again claimed headlines when it was reported that ten members from the state of Maharashtra belonging to Ummat E Mohammadiya, an IS-inspired group, for planning to poison many people partaking in public events and celebrations.[1] This came close on the heels of another major arrest of ten suspects connected to a pro-IS group called Harkat-ul-Harb-e-Islam in December 2018 by the National Investigation Agency (NIA).[2] According to the NIA, the group was planning to attack political figures, security installations, and public places. The NIA also recovered a cache of weapons made in India, including a rocket launcher and some pistols.

What might these two widely reported incidents reveal regarding the nature and gravity of the threat posed by IS to India? Firstly, the groups in question, Ummat e Mohammadiya and Harkat-ul-Harb-e-Islam, are new[3] and have not been declared by IS to be an affiliate. This indicates that IS is likely to have played an inspirational, as opposed to a leadership role in the two groups’ formation and operations. However, that the leader of at least one group, Mohammed Sohail, has been in touch with a handler from abroad demonstrates some level of influence beyond merely providing inspiration.

Second, the nature of the weapons recovered from the Harkat-ul-Harb members were of those made in India. While some journalists[4] have used this to question the veracity of the arrests, it is quite common for terrorist groups to employ such weapons. In fact, in February, three men who had pledged allegiance to the Islamic State, before departing for Kashmir, attempted[5] to buy weapons from sources in Munger,[6] a region in Bihar famous for producing quality replicas of weapons such as AK-56’s and M-4’s, among others.

Moreover, the low level of the weapons’ sophistication could also indicate that the members in question avoided buying better quality weapons since such transactions often invite scrutiny and could have disrupted the operation. The Islamic State, in its desperation, has exhorted[7] its followers to use any and every type of weapon, including knives and cars to spread fear. The types of weapons uncovered by the NIA are of the kind that IS has encouraged its foot soldiers and followers to use.

This is also substantiated by the method adopted by the second cell, Ummat e-Mohammed, which sought to mix some chemicals with food meant for religious celebrations.[8] It is questionable how effective such a plan would be given the large amount of toxins required. Yet, this only speaks of a move towards low cost, high impact tactics to increase casualties and more importantly, spread fear.

Fourthly, the Rashtriya Swayamsevak Sangh (RSS) headquarters[9] and some (undisclosed) political figures were alleged targets of the HuJI cell. This can be seen as a reflection of hatred directed towards these figures for their often times extreme views. Nowadays, it is common practice for terrorist groups to target such individuals, who are perceived as being Islamophobic. In fact, Al Qaeda-linked groups too have identified RSS as potential targets.

Discussions about the IS should not be limited to these two foiled attempts alone. It is important to place the incidents in the context of larger trends and incidents, both in the nation and globally.

The IS Presence in India

To date, the Islamic State has not established a significant presence in India. IS’ main recruiter, Shafi Armar,[10] who, based in Bhatkal, is believed to be operating in Syria, has been responsible for officially forming two major cells: the Janood-ul-Khalifa-e-Hind and Ansar ut-Tawhid fi Bilad al-Hind. However, over the past five years, these groups have not gained the traction they expected and have struggled to carry out any attack. Simultaneously, IS only did marginally better in attracting Indians to its heartlands in Iraq, Syria, and Afghanistan.[11]

Nevertheless, over the past year, the Islamic State has seemingly tried to expand its presence. The Janaury 2019 and December 2018 plots were not the only evidence of their activities. In September 2018, police agencies disrupted another plot to break a top IS operative[12] out of a jail in Tamil Nadu. Moreover, in October 2018 Kerala police discovered that ten individuals had joined IS in Afghanistan.[13] This is in addition to IS’ persistent presence in Kashmir, where most recently, the mounted at least ten operations that produced 22 casualties. Furthermore, in the new issue of IS’ magazine, Al Risalah, the group dedicated a few articles to political issues taking place in Kashmir.

In India, a few factors weigh in on the strength and operation of terrorist groups such as the Islamic State. Firstly, rising Islamophobia[14] and hate crimes in India are a rallying call for Jihadists and serve as a recruitment vehicle to attract disenfranchised individuals. While the Muslim community has largely insulated itself from such elements, there are always chances of a few individuals being attracted to such calls.

Secondly, of the approximately 100 people who joined the Islamic State in its heartlands, at least half came from the state of Kerala.[15] While analysts ponder the ideological underpinnings of Keralite Muslims as the propeller of these foreign fighters, it is more likely that geography and upward mobility play a defining role in pushing them forward. For instance, the state is known for housing the most educated population of India, with almost 2.5 million Keralites[16] working in the Gulf. This connection is crucial since most of the IS fighters traveled to Syria, Iraq and Afghanistan via Gulf nations[17] to avoid suspicion. Given the geographical proximity of Kerala to the Gulf States, using them as transit points to IS-held areas is much easier for Keralites than for people living in the northern parts of India.

Thirdly, IS has long been hemorrhaging fighters and finances, with many of its cadres migrating to other countries, including Afghanistan, to regroup. This bears direct implications on India as well since more than 30 Indians have travelled to Afghanistan. Indeed, IS itself has asked[18] its followers to shift to Afghanistan if they weren’t able to make it to Iraq and Syria. India has always been wary of its citizens participating in the Afghan Jihad due to the blowback on the nation and it is likely that intelligence agencies will continue to stay wary of the IS presence in the war-torn nation. In the future, it is possible that IS recruits from India will travel to Afghanistan should they want to migrate to its territory.

The Islamic State has grown slowly under the radar from a low to a low-to-medium level threat and most likely will continue to follow this trajectory. Many analysts, including myself,[19] have tended to minimize the threat posed by IS to India, largely because up until now, the group has not conducted any major attacks or succeeded in recruiting a significant number of members.  However, as terrorist groups tend to grow slowly over a period of years, neither analysts nor intelligence professionals can afford to be complacent. Indeed, Al Qaeda launched its first attack in Yemen almost four years after its formation,[20] and remains a threat to various countries within and beyond the wider Middle East.

Intelligence agencies such as the National Investigation Agency and the Central Bureau have successfully foiled quite a few operations over the years. They have used cyber teams[21] and have cooperated with international counter terrorism units[22] to disrupt various plots. It is crucial that they continue to monitor threats and to work with international partners against terrorist groups such as the Islamic State. Simultaneously, media agencies in India should give due consideration to their own role in the growth of terrorist groups. Partisan and ethically problematic coverage of terrorist incidents contribute to the polarization of views and opinions within the wider society. In the long run, this could further inflame communal and inter-religious tensions, which in turn conduce to radicalization. Constant vigilance by security professionals and responsible journalism might not inoculate India from IS and other terrorist outfits but will undoubtedly help contain mitigate the threat they pose..

[1] “Another arrest in case of Islamic State conspiracy,” The Hindu, January 27, 2019, https://www.thehindu.com/news/national/other-states/another-arrest-in-c…

[12] Vicky Nanjappa, “Tamil Nadu’s Islamic State problem and why Cuddalore is back on the radar,” oneindia.com, October 2, 2018, https://www.oneindia.com/india/tamil-nadus-islamic-state-problem-and-wh….

[13] “In a shocker from Kerala, 10 people confirmed to have joined ISIS,” The Times of India, December 13, 2018, https://timesofindia.indiatimes.com/videos/city/kochi/in-a-shocker-from….

[18] “ISIS calls on Muslims to join them in Afghanistan if they can't make it to Iraq or Syria,” The Straits Times, March 7, 2018, https://www.straitstimes.com/asia/south-asia/isis-calls-on-muslims-to-j….

[20] Reportedly, Al Qaeda was formed in 1988 and launched its first attack on a hotel in Yemen in 1992. However, some analysts do claim that AQ’s first attack was in fact in 1998 in Nairobi, Kenya, making the gap between formation and first attack ten years. See “Al-Qaeda’s terrifying decade of worldwide slaughter,” The Guardian, July 10, 2005, https://www.theguardian.com/uk/2005/jul/10/alqaida.july7.

[21] Vicky Nanjappa, “Chakravyuh: These ISIS recruits didn’t know who they were speaking to,” oneindia.com, January 14, 2015, https://www.oneindia.com/india/chakravyuh-these-isis-recruits-didnt-know-who-they-were-speaking-to-1621263.html; and “Kerala: Operation Pigeon ‘saves’ 350 youths from ISIS,” The Times of India, June 30, 2017, https://timesofindia.indiatimes.com/city/kochi/kerala-operation-pigeon-….