Israel and Syria: Whither now? 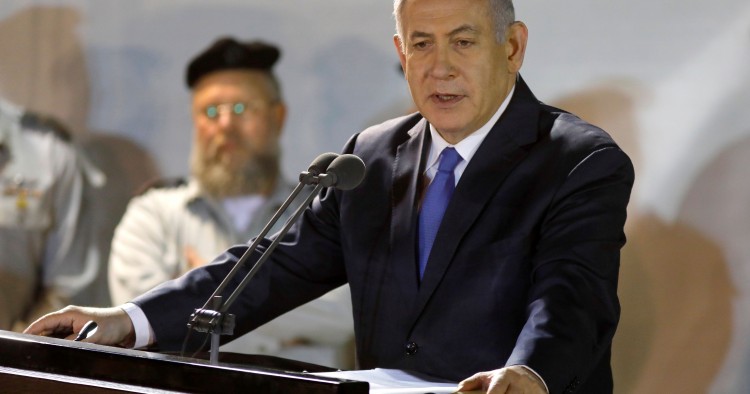 Following a brief lull on the Israel-Syria front earlier this year, Tel Aviv has once again resorted to striking Iranian assets to its north. According to reports, in its most recent attack, Israel deployed a new supersonic missile — dubbed the Rampage — to carry out air strikes on Iranian positions in Syria’s Masyaf district on April 13. Although Tel Aviv did not claim responsibility for the attack, Israeli media and satellite imagery suggested that the missile hit its intended targets. If these reports are confirmed, Rampage effectively neutralized the capabilities of the Russian-made S-300 missile system, which was delivered to Syria mere days after Israel downed a Russian military plane on Sep. 17, to target incoming missiles. The absence of any defensive fire from the S-300 on April 13, however, may also suggest a new understanding between recently re-elected Israeli Prime Minister Benjamin Netanyahu and Russian President Vladimir Putin. Russia’s hosting of Netanyahu days prior to the April 9 elections thus demonstrated clear limits to Russian engagement in Syria, and on behalf of the Assad regime, even if it contravenes long-standing Syrian policy.

The meeting between Netanyahu and Putin on April 4 — the 13th since December 2015 — was replete with symbolism. In 2018, Israel’s ties with Russia became increasingly strained following military confrontations inside Syria, which highlighted their diverging geopolitical interests and reflected Moscow’s desire to secure Bashar al-Assad’s survival, including with the aid of Iranian and Shi’a proxies’ ground forces. Putin’s embrace of Netanyahu in the midst of a heated re-election campaign sought to demonstrate that these tensions are a thing of the past. At the request of Netanyahu, Putin — with the cooperation of the Syrians — helped recover the body of Zachary Baumel, an Israel Defense Forces (IDF) soldier who went missing during the 1982 Battle of Sultan Yacoub against the Syrian army in Lebanon’s Bekaa Valley. This move by Moscow, which followed President Donald Trump’s recognition of Israeli sovereignty over the Golan Heights, indicated that Putin intends to seek close coordination with Israel, in part to secure increased regional dependence on Moscow.

In the wake of Trump’s Golan Heights proclamation, there are concerns that tensions may rise along Israel’s northern border. In early April, Syria’s Foreign Minister Walid Muallem vowed to recapture the Golan from Israel “by all means.” In contemplating a confrontation with Israel, however, the Assad regime will be forced to consider the increasingly divergent interests of its two main backers: Iran and Russia. During the 2018 Helsinki Summit, Putin and Trump agreed to create a southern de-escalation zone near the Golan Heights, with full consideration of Israeli interests. This move was well received by Netanyahu due to Russia’s perceived message to Iran to pull its forces and allied militias from the border. A March 2019 cabinet report filed by Netanyahu went even further, declaring that Moscow’s goal was the removal of Iran from Syria. While the report ignored Russia’s self-declared inability to challenge Iranian entrenchment inside Syria, recent clashes between Russian troops and pro-Iran militias do suggest that both nations are increasingly involved in a tug of war.

Netanyahu’s claim was supported by a Russian proposal to oust Iranian and pro-Iranian forces from Syria. The “Patrushev Paper,” which was presented by Nikolai Patrushev, Putin’s national security adviser, to his Israeli counterpart in mid-2018, also allegedly called for a U.S.-Russian dialogue on Syria and halting U.S. efforts to reimpose economic sanctions on Russia; the latter request reportedly led Netanyahu to reject the plan. Trump’s announcement on the Golan Heights offers Russia an additional incentive to heed Israeli regional interests as a means to gain leverage in Washington. Since U.S. recognition of Moscow’s 2014 annexation of Crimea is at the top of Putin’s wish list, Trump’s unprecedented, unilateral decision to recognize Israeli control over the Golan Heights has offered Putin renewed hope.

If the Syrian regime, prodded by patriotic bravado and Iranian-led aggression, were to engage in military action against Israel, this would end up being a foolhardy venture. The Syrian Arab Army (SAA), which has been engaged in a civil war for almost a decade, is a shell of its former self. When protests against Assad’s regime began in 2011, the SAA numbered about 250,000. While official estimates of the army’s current strength are lacking, casualties, desertions, and draft dodging have made Assad desperate for new recruits, and he has reportedly gone to great lengths to reconstitute his forces. A recent effort included changing the rules for passing university exams in an attempt to force male students into the SAA. At the same time, the regime’s reliance on non-state pro-government armed groups has increased. Irregular formations controlled by profiteers, local warlords, and Iranian-recruited Shiite fighters outnumber the units that answer to Damascus, complicating the question of control and loyalty.

Despite its fierce condemnation of Israel’s ongoing occupation of the Golan Heights and President Trump’s recent announcement, it also appears that the Syrian regime, which has been driven by securing its own survival and reinforcing its legitimacy, is primarily interested in recuperating more immediate territorial losses. To date, the regime has regained about 60 percent of Syria; as a result, Assad is likely to be more intent on reclaiming Idlib and the territory east of the Euphrates prior to re-asserting control over the Golan Heights, a sparsely-populated area that was lost more than 50 years ago during the 1967 war and has not been a military target for Syria since 1973. Recurring negotiations over an elusive peace deal between Syria and Israel, which would include a land swap, collapsed in 2011 with the beginning of the Syrian uprising.

Although a confrontation between the SAA — a largely centralized army — and the IDF is unlikely to occur in the near future, there is a threat of escalation along Israel’s northern border. In the wake of Trump’s Golan Heights announcement, Hassan Nasrallah, head of the Iran-backed Lebanese group Hezbollah, called for “resistance” to regain occupied Syrian land. While Hezbollah has refrained from taking immediate action, its effectiveness and influence, including as a result of its paramilitary status in Syria, cannot be underestimated. The 2006 Israel-Hezbollah war already revealed the IDF’s failure to adequately respond to the non-traditional military campaigns and effective counterinsurgency launched from Lebanon.

By exposing the vulnerability of Israel’s home front, the Shi’a group was seen as having identified a successful strategy to withstand the Israeli war machine that had previously defeated combined Arab armies. With Hamas drawing closer to Syria as a result of recent mediation attempts by Hezbollah and Iran, the opening of a new southern front equally cannot be excluded, including as a means to deflect attention away from the dire living conditions in the Gaza Strip.

Grace Wermenbol is a non-resident scholar at the Middle East Institute and an expert in contemporary geopolitics of the broad Middle East and North Africa (MENA) region. The views she expresses are strictly her own.