The Israel-China-U.S. Triangle and the Haifa Port Project 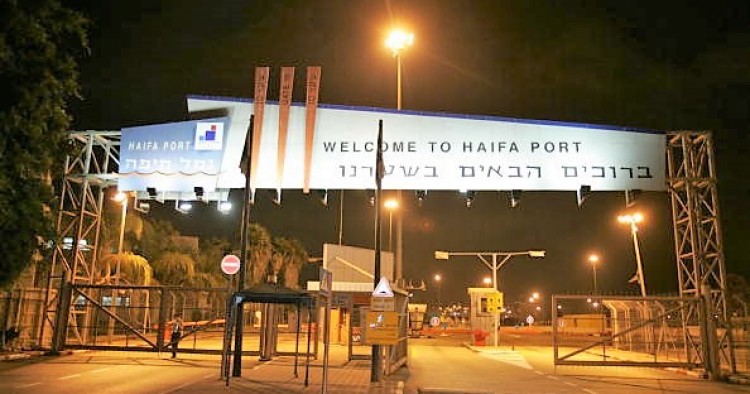 This essay is part of the Middle East-Asia Project (MAP) series on "Israel: The Future is Asia". The series investigates Israel's expanding relations with Asia -- the forces propelling and impeding their growth, the progress made in their development, and their as yet unrealized potential. See More ...

In March 2015, Shanghai International Port Group (SIPG) won the tender to operate the northern port in Haifa, a facility being built by Ashtrom Group and Shapir Engineering.[1] In July 2018, management of the first part of the new port was transferred to SIPG, which produced an unexpected backlash throughout the Israeli media.[2] What could have sparked such harsh reactions? A possible explanation is that the powerful Haifa port workers’ union is the driving force behind the effort — reminiscent of the campaign waged by the Association of Contractors and Builders in December 2017, which included billboards and a Facebook page calling for the prevention of Chinese companies from penetrating the Israeli market.[3]

Yet, whoever is responsible for waging the current campaign deserves credit for putting the issue at the forefront of Israel’s public agenda. The Israeli decision-making process regarding Haifa port — from the project’s inception to this very day — has been opaque, at best. On the occasion of SIPG’s successful bid to manage the new Haifa port, Minister of Transportation Israel Katz exclaimed: “This is an historic day for Israel ... The Chinese group that won the tender will bring competition to the sector . ..The new ports will create thousands of new jobs and lead to a drop in the cost of living ... It’s an expression of confidence in the State of Israel on the part of a superpower, which has decided to invest billions of shekels in Israel and turn it into an international cargo center for all the world.”[4] However, the deal reportedly did not involve the participation of either the Israeli Cabinet or the National Security Council.[5] Assuming such accounts are correct, then the Israeli port contract bids process ignored the potentially far-reaching implications of letting a foreign company manage the main gateway to the country.

In their single-minded determination to increase competition and participation of the private sector in the Israeli port industry, the Israeli authorities have incurred risks and problems that could have been avoided: friction with the American side, the possibility of ‘leakage’ of sensitive information into Chinese hands, and extensive foreign control over the Israeli economy that might provide pressure points the Chinese could someday exploit. Israel’s trade with its immediate neighbors is miniscule. Nearly all the container cargo that enters and leaves Israel passes through the ports of Haifa, Ashdod, and Eilat.[6] Israel’s submarine fleet is based at Haifa, which is also a port of call for the U.S. Sixth Fleet. Thus, ceding control of these ports to a foreign entity — in this instance, a Chinese company — entails risks that are, or should be, plainly evident.

The United States, and more specifically, the long-standing U.S.-Israel strategic partnership, is the key element shaping Sino-Israeli ties. There have been two major cases when, in the past, Israel’s efforts to develop ties with China have generated friction with its principal ally, the United States. The first incident occurred in July 2000, which culminated in the cancellation — due to American pressure — of Israel’s sale (agreed four years earlier) of the Phalcon advanced airborne early-warning (AEW) system.[7] The second incident took place in 2005, when the Israel Aircraft Industries (IAI) deal to upgrade the Harpy unmanned aerial vehicles (UAVs) — concluded with China several years earlier and which the U.S. had not explicitly opposed — was likewise scuttled.[8] Reflecting the high level of U.S. displeasure with the Harpy deal, the Bush administration reportedly requested that four senior Israeli defense ministry officials be dismissed.[9] Israeli defense industry officials were plainly dissatisfied with their government’s decision to accept an American veto on arms sales to China and thereby cut them out of a lucrative market.[10]

Unlike the sensitive issue of sophisticated arms sales to China, the Haifa northern port facility, part of which was transferred to Chinese operation last July, has never been defined as being off-limits by American officials in their discussions with their Israeli counterparts. Nevertheless, the proximity of this facility to an Israeli navy port that the U.S. Sixth Fleet operating in the Mediterranean under European command also uses has raised concerns and potential problems — including the possibility that American ships might no longer dock there.[11]

Should the Chinese intend to spy on the Israeli or American navies, control of the Haifa facility will likely be a valuable asset. Given that many Chinese companies are state owned or state-directed, the possibility that their activities are not strictly commercial in nature cannot be ruled out. Here, it is worth noting that SIPG, though listed as a public firm, is under the control of the Shanghai government, which holds most of the company's shares. Furthermore, the duration of the initial contract to operate the port (i.e., 25 years) would allow for China to implement a long-term plan of espionage, were it inclined to do so — creating a degree of exposure that American officials would likely find untenable, and that ultimately could inhibit U.S.-Israeli naval cooperation.[12]

Furthermore, Israel itself may lose the ability to control its own assets. Unlike other projects that were or are carried out by Chinese companies in Israel, the long duration and extensive scope of the Chinese presence will enable China to develop access to sources of knowledge within the Israeli economy. In the last few months, several Chinese espionage and cyber-crimes cases against American companies and entities have been reported.[13] As disturbing as these cases are, in none of them does China enjoy the easy and regular access as it does through the new seaport. Any company (civilian or military) that wishes to send and/or receive goods through the port will be exposed to the Chinese company operating that facility.

Over the past decade, the tiny Israeli market has been swarmed by Chinese companies across a wide range of sectors — from high-tech and Dead Sea industries to the construction of a high-speed railway and subway tunnel. The enormous disparity in size between the two countries, coupled with the opacity of Chinese interests and intentions due to the role and behavior of the Chinese Communist Party in conducting foreign economic relations should give all Israelis pause. If nothing else, permitting unfettered Chinese access to the Israeli economy could lead to an unhealthy degree of dependence. Regarding the new Haifa port, consider this scenario: Should the Chinese government, for whatever reason and at any time, decide to divert the ships that use this facility to another port, say, in Greece or Cyprus (where the Chinese already operate seaports), the Israeli economy would suffer great damage.

The danger to Israel is magnified by the widely held belief among Israeli policymakers and the public that Israeli technology is so important to China that the latter would refrain from any action that might place this relationship at substantial risk. President Xi Jinping has reinforced this belief, stating (during Prime Minister Benjamin Netanyahu’s March 2017 visit) that Beijing “recognizes Israel as an important strategic partner regarding innovation.”[14]

This brings us back to the challenge Israel faces regarding how to manage ties with China without causing unnecessary friction or unwittingly compromising its vital strategic partnership with the United States. The fact that whereas no Chinese president has visited Israel in 18 years three American presidents (Bush, Obama and Trump) have made a total of five trips to Israel within the same period is indicative of the level of importance of the U.S.-Israeli, as compared with the Sino-Israeli relationship.

Whereas Israel and the United States have had misunderstandings, the longevity and extensiveness of the ties that bind them — including that they are both democracies, and that the large Jewish community living in the United States serves as a ballast — endows the bilateral relationship with a character and level of importance that Israel-China relations do not possess and are unlikely to acquire. Indeed, China is a close ally of Iran, which openly calls for the destruction of Israel, and of North Korea, which has supported Iran’s nuclear program and Syria’s production of chemical weapons.

The lesson derived from the Phalcon crisis in 2000 is that lack of communication and clarity between the two sides leads to incidents that can escalate very quickly. Israel and the United States need to quickly find solutions to the tensions between them regarding the new port in Haifa, and jointly develop an approach to dealing with Chinese investment and commercial activities that have possible strategic ramifications.

It is not too late to find a way how to ease the tensions between Israel and the United States regarding the case at hand. The United States needs to explain to the Israeli policymakers and the public the risks associated with a Chinese company managing the new port in Haifa. Meanwhile, the Israeli side must be very clear about how it intends to deal with the potential threat the Americans see in this new commercial arrangement. As for the longer term, Eran Lerman, Vice President of the Jerusalem Institute for Strategic Studies, suggests a potentially useful model for Israel to employ in conducting business with China: “It might be worth forging more links not between Jerusalem and Beijing but between Israel and specific Chinese provinces, entities that by definition focus on legitimate civilian needs.”[15] For their part, American officials should endeavor to convey their concerns about pending agreements with Chinese entities before such deals are executed and encourage Israel to introduce safeguards that will not only ensure its continued prosperity but the security of its critical infrastructure, national assets, and defense systems.

[5] “Israel’s ties with China are raising security concerns,” The Economist, October 11, 2018, https://www.economist.com/middle-east-and-africa/2018/10/11/israels-ties-with-china-are-raising-security-concerns; and “Officials warn of risks in warming business toes with China,” The Times of Israel, October 14, 2018, https://www.timesofisrael.com/officials-warn-of-risks-in-warming-busine….

[10] “The Ministry of Defense Surrenders to the American Demand and Does Not Approve Security Export Deal with China,” The Marker, June 8, 2005, https://www.themarker.com/misc/1.296413.