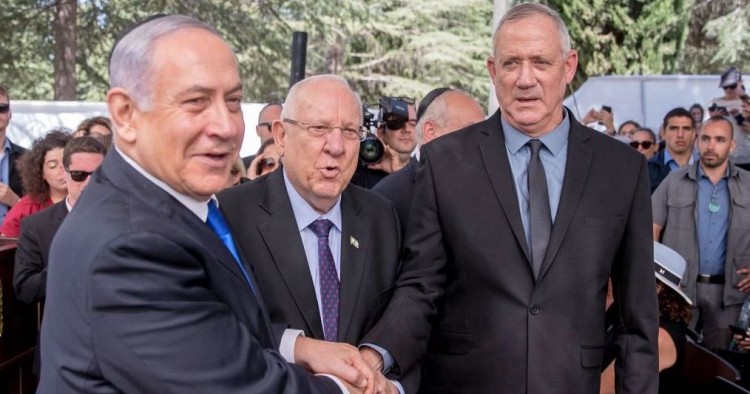 Israel’s 17-month ordeal without a functioning government has mercifully come to an end. An unlikely coalition that agrees on little has given birth to a monstrosity that is the largest government in Israel’s history, with 34 cabinet positions (some reports say 36) plus 16 deputy ministers. Numerous new ministries have been carved out in order to make it work, including a novel office for Blue and White leader Benny Gantz, who will be “alternate prime minister” (as well as defense minister) for 18 months while Benjamin (Bibi) Netanyahu holds the top job, at which point they will switch — assuming the government hasn’t collapsed by then. The coalition agreement is hedged in with countless provisions to deal with eventualities that may arise or disputes between parties and individuals who have no trust whatsoever in each other.

Only two issues on the agenda

Most governments come into office pledging to deal with a host of issues — of which Israel has a particularly large array since it hasn’t dealt with any since December 2018, when its previous government was dissolved, three inconclusive elections ago. Nevertheless, this government has agreed NOT to deal with new initiatives for six months, with two exceptions. The first is, predictably, the coronavirus crisis, which is the putative reason for Gantz breaking his oft-repeated promise not to sit in the same government with Bibi (who’s under indictment for fraud, bribery, and breach of trust, with a trial scheduled for May 24). Fortunately, Israel is in a comparatively good position vis-à-vis the virus since it took strict measures early on and enforced them, so it is left primarily with the economic consequences to deal with.

The second issue that the government will allow itself to deal with (after July 1) is whether to annex parts of the West Bank and, if so, how much. After 53 years of occupation, Donald Trump’s “Deal of the Century,” unveiled in January, gave Israel “permission” to annex part of the West Bank. Although polls show Israelis solidly in favor of annexing the Israeli settlements themselves and the Jordan Valley (including as few Palestinians as possible), annexation is a political minefield, not only internationally — virtually the whole world outside the U.S. staunchly opposes it — but also within Israel, including some unusual suspects.

President Trump’s plan “allowed” Israel to annex up to 30 percent of the West Bank in return for an eventual non-contiguous Palestinian statelet, provided a number of unlikely conditions are met. Israel’s far-right Yamina party is not, somewhat surprisingly, part of the new government and it, together with most settlers, welcome annexation but have denounced the Deal because they consider any Palestinian state whatsoever as anathema. Of course, the near-denuded Israeli Left opposes it along with Israel’s Arab minority, as does the international community, though the latter is largely toothless because of a guaranteed U.S. veto of any UN Security Council resolution that might criticize it. However, Israel’s usually reticent friends in the Arab world, such as Egypt, Saudi Arabia and the Gulf countries, and Jordan are reportedly quite concerned, especially Jordan, whose King Abdullah has been outspoken against any such move.

The only forces that might put some brakes on it are within the new government itself — and President Trump, should he choose to do so. Alternate Prime Minister Gantz and some Blue and White Knesset members are understood to be opposed to annexation at this time, but are wary about expressing these views publicly because of its general popularity. Even more enigmatic is the role of Prime Minister Netanyahu, whose enthusiastic public support is unrestrained, but who is privately believed to be concerned about its effect on Israel’s international partners and regional neighbors. Despite his reputation abroad as a far-right radical, Bibi is regarded by the “real” Israeli far-right as overly cautious, having limited settlement growth and been unwilling to take bold steps such as seeking to destroy Hamas militarily.

Even the role of the U.S. seems to be ambiguous. Secretary of State Mike Pompeo made an unusual six-hour visit to Israel last week in the midst of the COVID-19 pandemic — and sources disagree completely regarding the reason for it. The Guardian said it was to assure that Bibi would go ahead with annexation because Trump needs it for his base, while The New York Times assured us it was to prevent Bibi from moving too enthusiastically to implement it. Amos Harel in Ha’aretz wrote that it had more to do with Iraq and Iran, while Hagai Amit in the same paper said it was really about limiting Chinese investment in Israel. If Bibi and Trump are both gung-ho about annexation, who was bucking whom up? Or are they?

A parliamentary government like Israel’s is expected to have its ducks in a row on the most important issues it expects to confront, but Israel’s clearly does not. Despite the expectations of both annexation’s supporters and opponents that it was virtually a done deal when the new government was announced, it is not. It may be that President Trump’s preferences may carry the day — unless the Times is right and it is the U.S. that is getting cold feet. Meanwhile, there are a lot of happy new ministers in Israel this week, but it is anyone’s guess how long they will get to keep their ministerial perks.

Paul Scham is a scholar at MEI and the executive director of the Gildenhorn Institute for Israel Studies at the University of Maryland, where he teaches courses on the history of the Israeli-Palestinian conflict. The opinions expressed in this article are his own.