Israel on the Outer in Syria’s Civil War 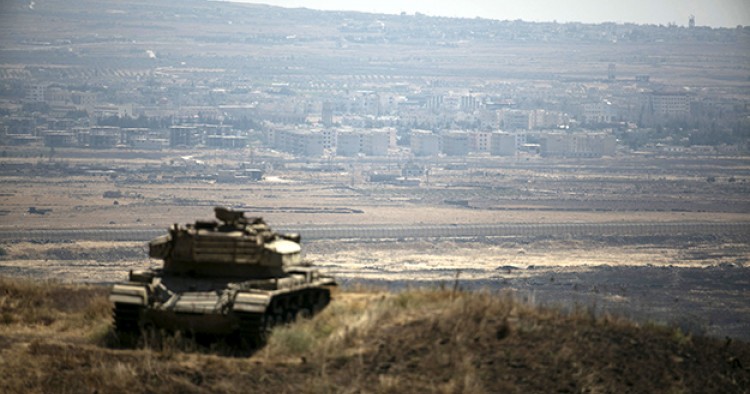 For successive Israeli governments and the defense establishment, the Syrian arena has traditionally been considered Israel’s “front yard” in terms of threat analysis, early warning and force readiness. The defense budget, comprising 7.7 percent of Israel’s G.N.P. in 2011 (latest available data), included considerable allocations designed to meet the Syrian army’s threat. In the series of Arab-Israeli wars, it was the Syrian army that received the highest marks by military analysts and Israeli generals. Its soldiers generally fought bravely, its command and control was robust and effective, and on balance it proved to be the most stubborn enemy of the I.D.F. In addition to its formidable conventional force, Syria built the largest and deadliest stockpile of chemical weapons of various kinds. All told, on Israel’s list of prominent threats over the last three decades, Syria featured very high, second only to Iran with its nuclear program.

Largely because of its threat potential, Israeli prime ministers, including Benjamin Netanyahu in his early years, showed interest in neutralizing it through diplomatic and political means. Israeli-Syrian negotiations on the basis of ‘land for peace’ took place in several intervals, usually through U.S. mediation, and centered on detailed security arrangements that were supposed to ensure long-term stability. The talks never bore fruit, but a certain degree of respect was created between the leaders—despite neither the late Hafez nor Bashar al-Assad ever meeting their Israeli counterparts—and the small negotiating teams of both countries. The 1974 Disengagement Agreement created a de-jure and de-facto long-term cease-fire, which was carefully maintained by both sides. The only caveat to this almost-idyllic status-quo was in the shape of Hezbollah and its Iranian patron, using Syria as a transit route for sophisticated weapons shipments, mainly missiles of various kinds. Israel adopted a policy of active prevention of these shipments, which had the potential of creating friction with the Syrian regime. However, in yet another demonstration of good judgment, the reactions were always restrained and clearly calculated to restore the status quo ante. Israel’s prevention was operationally effective, but strategically futile. Hezbollah was able to amass missiles and rockets, build a formidable military force, then rebuild and multiply it after the 2006 Lebanon war, following an Iranian game plan and with active Syrian assistance.

And then came the ‘Arab Spring’ with all its might and mayhem, turning Syria into a geostrategic and humanitarian disaster zone, right there in Israel’s front yard, undoing decades of carefully kept ‘rules of engagement’ and unraveling piles of strategic assessments and military doctrines. Israel—like all other regional state actors—was caught by total surprise. The then defense minister Ehud Barak—and former head of the I.D.F.’s joint chiefs and former prime minister who negotiated with Syria—was quick to predict Assad’s fall ‘within weeks or months,’ echoing a consensus view within the defense and policy establishment, building on decades of meticulous intelligence work and supposedly ‘intimate knowledge’ of the Syrian mafia state’s innermost dynamics.

When it gradually became clear to Israeli decision makers that they in fact had little knowledge on Syria’s internal machinations, an urgent need arose to reframe Israel’s Syria policy and redefine the national security interests in that context. After a series of cabinet deliberations, a quick operational response was implemented, in the form of reinforced border regime, heightened strategic messaging and limited humanitarian aid. The I.D.F. built a new security ‘smart fence’ spanning the entire Golan Heights disengagement line, erected a field hospital for wounded Syrian civilians, and communicated clearly through various channels that Israel will not tolerate any incursions into its ‘sovereign territory,’ including the occupied annexed Golan Heights. Initial fears of massive waves of refugees and regular attacks by various terrorist groups were proven an exaggeration, probably at least in part due to these prudent steps.

But what about a more comprehensive strategy? What role should Israel play in this historic re-shaping of the Syrian state, as part of a complete regional upheaval?

Israel approached these questions with one clear premise—the overall strategic goal was and will remain countering the Iranian regional hegemony strategy. Syria was perceived as a proxy war between the Iranian Shiite axis and its Sunni rivals. The fact that the conflict was actually triggered by Syrian civilians driven by internal considerations and seeking civil liberties was practically dismissed. Framed in this way, the logical conclusion should have been the definition of Israel’s interest as the fall of the pro-Iranian Assad regime. But, Israel was always reluctant to voice its support of the opposition forces, or to assist them in any significant way. This internal contradiction can be explained by invoking a famous saying coined by the late Israeli Prime Minister Menachem Begin, who reportedly said during the Iran-Iraq war (1980-1988): “We wish both sides great success.”

With no clear alternative to the Assad regime, and given the conventional and non-conventional capabilities of the Syrian army, Israel was worried that chaos will ensue and specifically that some of those capabilities and weaponry will fall into Hezbollah’s hands. It, therefore, opted for a minimalist strategic posture, announcing it will only respond to immediate direct security threats such as missile transfers or border attacks. It strictly refrained from formulating any political position regarding Syria’s regime or post-conflict structure. This policy has served Israel well, at least in the eyes of its architects. In the highly-regarded ‘outcomes-test’—another brainchild of Ehud Barak which became a fundamental principle in policy deliberations and public discourse—most if not all of the threats emanating from Syria were successfully prevented. With only a few minor border incidents in the course of the last five years of conflict, there seems to be ample justification for this modus operandi.

Alas, there is a critical flip-side to this policy, with clear negative outcomes, that are not discussed enough. By choosing a minimalist, security-driven approach, Israel also chose to abandon the diplomatic and political scene and with it any influence on the shaping of the political endgame in Syria. This is not only a missed historic opportunity as it relates to its ‘front yard,’ it also sets a standard for future conflict arenas in the region. This self-exclusion serves to deepen Israel’s isolation in the region and in the international community. One only needs to compare this Israeli approach to Iran’s hyper-active and successful regional strategy. Sadly, Iran has positioned itself as a critical factor in almost every Middle Eastern arena. While it is definitely seen as ‘part of the problem’ in several respects, it has made itself indispensable to any solution. Using what the Lebanese-American scholar Nassim Nicholas Taleb calls “skin in the game” strategy, Iran effectively bought itself considerable “stock options” in the Middle East future’s market. Israel, on the other hand, is left out of the market.

Furthermore, from an internal perspective, Israel lost the moral high ground. With the Jewish state’s unique history of unparalleled humanitarian suffering, having lost millions to genocidal atrocities, Israel was supposed to sound the clear voice of morality and humanity in the face of the Syrian carnage. It chose not to, abdicating its historic national responsibility and opening the door for accusations of hypocrisy and double standard. Ironically, throughout the last six years, Israeli politicians did not shy away from vicious attacks against the U.S. and European governments for standing idly by as hundreds of thousands of innocent civilians are being butchered in Syria.

Recently, as the multilateral negotiations for a political agreement seems to be edging forward, Israel is trying to reclaim some influence and leverage. A ceremonial government meeting was held at the edge of the Golan Heights cliff overlooking the Sea of Galilee. It was a clear message to re-stake the territorial claim in the new emerging context of Syria’s international borders. The transparent act was quickly rebuffed by the United States, Germany and the United Nations.

Israeli-Russian military coordination has also been added to the policy mix since Russia’s limited deployment of aircraft and troops to Syria in late 2015. Contrary to media reports, the degree to which Israel and Russia’s interests in Syria actually coincide is highly questionable. An Israel keen to see diminished Iranian influence in Syria is on the wrong side of Russia.

Looking ahead, beyond the U.S. elections, Israel’s Syria policy will continue to suffer from lack of strategy and international and regional partners. The operational prudishness will continue to bear fruits and it is likely to remain unchanged. But if there is a political agreement to which all actors are signatories—with the only exceptions being Israel, ISIS and Jabhat al-Nusra—Israel’s strategic self-exclusion will be clearer than ever.