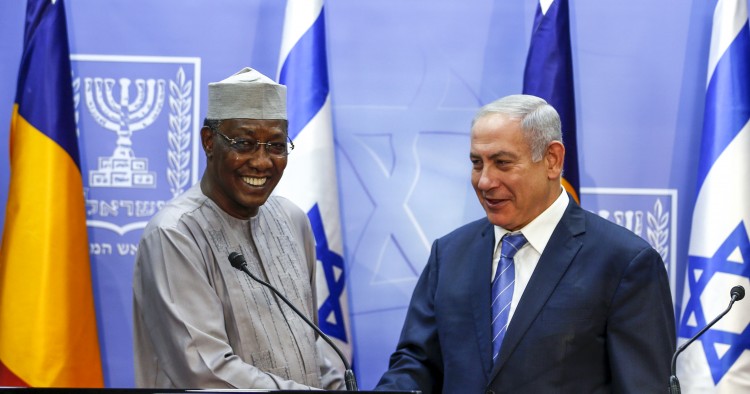 On Jan. 20, Israeli Prime Minister Benjamin Netanyahu and Chadian President Idriss Déby announced the official resumption of diplomatic ties. The renewal of relations with N’Djamena, following a 46-year hiatus, comes in the wake of a broader effort by Netanyahu to improve diplomatic relations with the African continent. The reciprocal visits by Netanyahu and Déby, which are to be followed by an equally historic meeting with Mali’s prime minister, suggest that Israel’s Africa surge has recovered from the setback experienced last year, when Togo – under pressure from North African countries and facing domestic political unrest – cancelled a planned African-Israel summit. The burst of diplomatic activity is part of a calculated reciprocal foreign policy. Accordingly, Israeli innovations are leveraged to meet the economic and technological demands of African nations, which, in turn, provide Israel an important tactical alliance to confront political challenges in international forums.

Dozens of sub-Saharan countries severed diplomatic ties with Israel in the early 1970s for two major reasons: promises of cheap oil and financial aid from Libyan leader Muammar Qaddafi and Saudi King Faisal, as well as compliance with the Organization of African Unity’s resolution, sponsored by Egypt, which called for all member to severe relations with Israel in the aftermath of the 1973 Yom Kippur War. While bilateral ties – although not necessarily diplomatic representation – had been (re-)established by the late 1990s as peace negotiations progressed, in recent years Israel has gone to considerable lengths to improve diplomatic relations with its neighbors to the west. In the last two years alone, Israel has hosted a succession of presidents and prime ministers from Togo, Rwanda, Ethiopia, Kenya, Liberia, Zambia, Sierra Leone, and Swaziland. Since mid-2016, Prime Minister Netanyahu has made four visits to the continent. As of 2019, Israel has full-fledged embassies in 10 out of 54 African countries; commercial partnerships exist with several more, following a historic pattern of economic joint ventures established in the 1950s under then Foreign Minister Golda Meir.

In 2016, Netanyahu became the first Israeli premier to visit Africa in nearly three decades. He even visited Entebbe, Uganda, where his brother died during the Israeli counter-terrorist hostage rescue of 1976. Since then, the Israeli prime minister has repeatedly travelled to the continent to expand diplomatic ties and to improve relations with African states, because, as Netanyahu claimed in Nairobi in 2016, “Israel is coming back to Africa, and Africa is coming back to Israel.” As a result of these visits, four new African embassies opened in Israel. In September 2018, Netanyahu and Rwandan President Paul Kagame decided to commence direct flights between Tel Aviv and Kigali and open diplomatic missions in both countries.

Israel’s push in Africa – described as a “priority” by Netanyahu during a 2017 security conference in Liberia – taps into regional growth expectations and the concomitant increase in reliance on foreign direct investment. By 2025, almost one-fifth of the world’s population will be living in Africa, and Africa was home to six of the world’s ten fastest growing economies in 2018. Since the mid-2000s, Israel has signed several trade agreements and investment programs in Western Africa, which are aimed at enhancing African infrastructure and technology, particularly in the agriculture and energy sectors. In 2017, Israeli officials signed a memorandum of understanding to invest $1 billion by 2021 to advance green energy and power projects across the 15 members of the Economic Community of West African States (ECOWAS). Israeli investment in the African continent goes beyond the public sector. Private sector engagements have included agricultural projects that provide water-efficient seeds to subsistence farmers and aid partnerships. Tech companies such as iA and NUFiltration have utilized Israeli technology to produce water-pumping and water-purifying systems to expand access to clean water in at-risk areas. During an outbreak of cholera in Cameroon in the summer of 2018, NUFiltration implemented a device that turns contaminated river water into purified drinking water. In recent years, this Israeli company has used the same system on the Ghanaian island of Pediatorkorpe, where villagers experienced kidney failure due to polluted water.

Sub-Saharan Africa is also an attractive market for Israel’s advanced defense technology. Security threats posed by extremist groups, such as Boko Haram and ISIS-affiliated groups, have increased demand for security innovations. Chad, which is one of several African states engaged in a fight with Boko Haram in the Lake Chad area, according to security sources, acquired Israeli weapons and equipment to help battle rebels. At the same time, Israeli outreach to Muslim-majority countries, such as Sudan and Chad, is an essential component of strengthening Israel’s own security interests. Prior to breaking its ties with Iran in 2016, Sudan was an essential gateway for smuggling Iranian arms – via Port Sudan and Egypt – into Gaza. Since its move away from Iran, leaked intelligence reports indicate that Sudan has been offered Israeli economic aid in return for renewing ties; in a tacit indication of future collaboration, Sudan allowed Netanyahu to cross through its southern air space last month on his way back to Israel from Chad.

With 54 internationally-recognized states, the African continent offers Israel an important strategic landscape to support its domestic and foreign agenda. According to Netanyahu, Israel is principally the target of an “automatic majority” of “African countries” at the United Nations (UN). Therefore, one of the goals of increasing ties with these countries is, in his words, to “change their voting patterns” on issues pertaining to Israel and the Israeli-Palestinian conflict. This battle is played out on other stages too, including at the African Union (AU), where Palestine – but not Israel – enjoys observer status. Palestinian President Mahmoud Abbas has repeatedly used this status to urge the forum to provide “additional support for the Palestinian issue,” as he did in his speech at the union in Addis Ababa on Feb. 12. Israel, in turn, has sought to leverage newly-established relations with sympathetic union chairs to reacquire its lost observer status and garner internal support, which – Israel hopes – will resound at the UN. Playing a tactical game of quid pro quo, Israel has dangled the carrot, in the form of aid, in return for loyalty. Following a vote at the UN’s Security Council that condemned Israeli settlements as illegal in early 2017, the Israeli government thus severed aid to Angola and Senegal for their support of the resolution.

Israel’s desire to normalize relations with Africa is inspired by the same motives behind Netanyahu’s outreach to South America and the Gulf Arab states. Netanyahu regularly vows to expand Israel’s diplomatic ties; in a 2018 speech delivered at AIPAC, the prime minister boasted of his foreign policy successes: “Remember when people talked about Israel’s isolation? Pretty soon the countries that don't have relations with us, they’re going to be isolated. [There] are those who talk about boycotting Israel, we’ll boycott them!” Netanyahu’s outward push, moreover, is meant to reinforce the message that it is possible to decouple international relations – including with majority-Muslim states – from the Israeli-Palestinian conflict. Symptomatic of this reasoning, Netanyahu claimed that the Iranian and Palestinian attempts to thwart Israel in “making new inroads into the Muslim world” would “not succeed.” Upon the renewal of ties, however, Déby was quick to reiterate that Chad’s commitment to relations with Israel does not negate his support for the Palestinian cause, stating “Our friendship to Israel does not replace our concerns on the Palestinian issue.”

While Déby’s words proffer a commonly-heard lip service in the Arab world, the Palestinian cause continues to play an important role in several African nations. After establishing ties with Israel in 1999, Arab League member Mauritania severed ties in 2010 in the wake of Operation Cast Lead in Gaza. Similarly, the Palestinian cause was invoked during recent attacks by al-Qaeda affiliates in Mali and Kenya. Following the resumption of Israel-Chad relations, a meeting by the Arab League – which includes nine members on the African continent – was held to curtail Israeli “expansion” in Africa. This meeting, held “within the framework of the league’s continued support for the Palestinian cause,” suggests that the so-called “normalization” of ties with Israel is still subject to intense scrutiny.