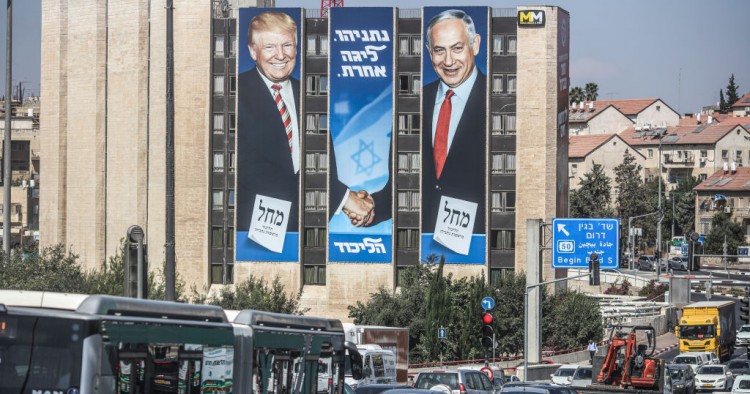 Israeli elections are generally lively affairs, with a plethora of parties combining, splitting, and making up — very much like a daytime soap opera. This election, set for Sept. 17, dragged on through the summer and looked set to be a repeat of its predecessor on April 9, when Prime Minister Benjamin Netanyahu failed by a single Knesset vote to put together a majority coalition. It has indeed been a largely sleepy affair, with the centrist (moving toward center-right) Blue-White party dueling with the Likud for the crucial top spot (providing the first chance to form a coalition) and most other parties barely budging in the polls. This somnolence ended explosively the week before the election with a series of events whose impact is still unclear.

First, Netanyahu announced Tuesday that if he is elected with a supportive coalition, Israel will annex “the Jordan Valley and the northern Dead Sea region.” Though vague on details, this could be as much as 30 percent of the entire West Bank, enough to officially make a Palestinian state — and thus the venerable two-state solution — impossible. There is little doubt that any coalition Bibi could construct would support this, thus ending 52 years of legally indecisive occupation. Of course, this is based on a tacit assumption that the Trump administration will not object, in stark contrast to any previous one, Republican or Democratic, which most certainly would have. As an election ploy, it is also firmly based on the parallel assumption that such a right-wing dream could only help him in the actual vote, and that no possible Likud voter would be scared off by promising to change the Israeli-Palestinian standoff so abruptly.

During the campaign, Bibi has wielded Donald Trump as if he were his own personal avatar. His campaign headquarters sports a huge banner showing Trump and Bibi together, with the caption “A Different League” (similar banners display Bibi with Russian President Vladimir Putin and Indian Prime Minister Narendra Modi — an autocratic troika with which he identifies). Bibi’s unconcealed hope was that Trump, whose support has so far been unswerving, would gift him with a present comparable to moving the U.S. Embassy to Jerusalem, or recognizing the Golan Heights as Israeli.

No such luck. Instead, twin blows emanated from Washington. First, Bibi‘s friend John Bolton, his ideal US national security advisor and the leading U.S. exponent of the “maximum pressure” campaign against Iran (up to and including bombing), was abruptly fired (or quit?). Second, Trump indicated a clear willingness to meet with Iranian President Hassan Rouhani, signaling he was no longer willing to take Bibi’s advice in all matters Iranian. Trump might even ease sanctions on Iran to facilitate the meeting, diametrically opposite from what Bibi was urging. Bibi’s Trump-prop was no more. He could only hope that the meeting wouldn’t take place before the election.

More unwelcome news came from the south, as Bibi was rushed off stage while giving a speech because of Hamas rockets, providing terrible optics. Some feel this might presage another war with Hamas. And his pet bill to provide cameras in (Arab) voting places to prevent nonexistent but suddenly discovered election fraud is headed for virtually certain defeat in the caretaker Knesset.

Are these the desperate steps by (or blows to) a losing candidate — or are they moves by a master strategist to energize his base? While the answer can’t be known till the votes are counted, indications are that Bibi knows his base, and Likud has risen in the latest poll, but that base may still be insufficient to provide the magic 61 votes that will keep him prime minister. Avigdor Lieberman’s secular and right-wing Yisrael Beiteinu party, which denied him his coalition in the spring, is certain to hold out for a government without Netanyahu — and at this point seems more likely than not to get it.

Let’s step back and see what the polls and recent events indicate about the Israeli electorate. It unquestionably hews to the right. Meretz, the only remnant of the Zionist left, running with former Prime Minister Ehud Barak, is polling at 6-8 seats. Venerable Labor, now only questionably left, is at 4-6. Israeli Arabs, though politically united, are discouraged and angry; their Joint List is expected to barely hold its 10 votes, even though they are 20 percent of the population. The momentum is with the right; a spectrum of secular, religious, populist, messianic, and even Kahanist groups, all imbued with the dream of a Greater Israel.

Nevertheless, what it will accomplish is far from certain. Ironically, if Blue-White, the great centrist hope, is part of the eventual governing coalition, the current stalemate is most likely to continue. Only if Bibi gets his right-wing coalition are things likely to change, and then only assuming he hasn’t lost the favor of the mercurial man in the White House. Despite the sound and fury, post-election Israel (and Palestine) are likely to be much the same. Only a deus ex machina (think 1967, 1973, or Anwar Sadat coming to Jerusalem) is likely to blow off the 52-year lid.