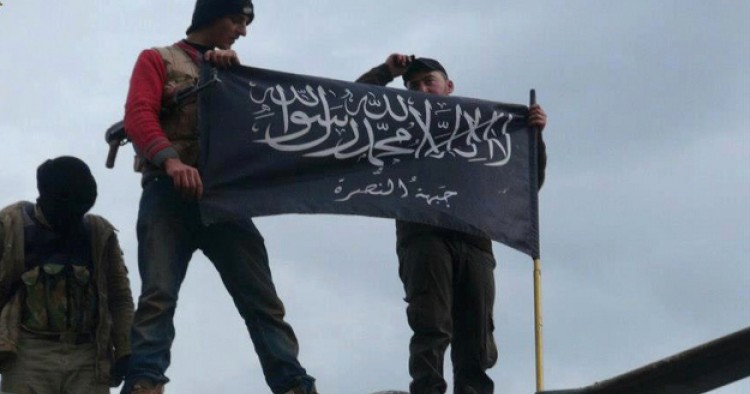 Ten days ago, under the relative calm of Syria’s cessation of hostilities, hundreds of civilians gathered in the Idlib town of Maarat al-Numan to celebrate the continuation of their populist revolution. For the first time in many months, the world heard Syrian people peacefully protesting in favor of change: “the people are one, and united, the revolution continues!” they chanted, while waving the three star revolutionary flag made popular by the moderate Free Syrian Army (FSA). Similar demonstrations took place in over 100 other towns across the country that day, in a stark reminder to the world that five years of being brutally suppressed by their own government had not defeated their zeal for a just and socially representative future for Syria.

In addition to this heartening protest rebirth, Syria’s two-week cessation of hostilities—or more accurately, its dramatic reduction of hostilities—revealed something else significant. While al-Qaeda may have successfully exploited the Syrian crisis in order to establish a concrete foothold in the heart of the Levant, its affiliate Jabhat al-Nusra lay particularly vulnerable when faced with constrained levels of violence. Although militarily preeminent amid total war with the Assad regime and Russia’s devastating and indiscriminate air bombardment, relative peace saw Jabhat al-Nusra become virtually impotent overnight.

The widespread re-emergence of the revolutionary flag in towns like Maarat al-Numan, where major FSA leaders like Ahmed Saoud and Fares al-Bayoush appeared alongside famed activist Hadi al-Abdullah to lead protests on Friday, March 4, represented a serious challenge to al-Qaeda’s perception of control. Weeks earlier, Jabhat al-Nusra and al-Qaeda front group Jund al-Aqsa had issued an Idlib-wide ban on the flying of anything except white and black flags of Islamic character.

Therefore, it was far from surprising that units of Jabhat al-Nusra fighters went on to confront activists across Idlib in the days that followed. Some incidents were reported, but many were not, like threatening messages sent to FSA commanders and acts of intimidation against their family members. “Maarat was a turning point for us in Idlib,” a prominent FSA leader told me. “The people have been emboldened. The Friday protests proved that our revolution is stronger than ever and al-Qaeda cannot stop that.”

Despite this, or more likely precisely because of it, the second Friday, March 11, of the cessation of hostilities saw a resumption of protests. In Maarat al-Numan, Jabhat al-Nusra’s patience ran out. Scores of unarmed militants on motorbikes stormed the demonstration there, first attempting to drown out the pro-FSA chants, then forcibly confronting protesters, including renowned activist Abu Elias al-Mairi. The following morning, multiple Jabhat al-Nusra units set about raiding facilities belonging to the 13th Division and arresting some of its members. By Sunday, the town’s FSA protectors had withdrawn and all 13th Division positions, including several weapons storage sites, had been captured by Jabhat al-Nusra.

To many, this was a scene reminiscent of Jabhat al-Nusra’s elimination of FSA rivals the Syrian Revolutionaries Front (in Idlib in November 2014) and Harakat Hazm (in Aleppo, in March 2015). However, what has followed the 13th Division’s subjugation in Maarat al-Numan is markedly different. Both the SRF and Harakat Hazm were widely distrusted by Syria’s conventional opposition, but the 13th Division is extremely popular. Nationally it has proven itself a capable and determined adversary of both the Assad regime and ISIS, while its humanitarian wing has coordinated the provision of aid in several Idlib towns and villages since 2014.

While conservative Islamist group Ahrar al-Sham is stepping up efforts to mediate, hundreds of prominent opposition figures have spoken out against Jabhat al-Nusra’s actions. Powerful religious leaders in Idlib, like Sheikh Ahmed al-Alwan, went as far as to accuse Jabhat al-Nusra of seeking all-out dominance in Idlib, at the expense of the revolution. Another sheikh I spoke to, who is closely linked to the armed opposition in Idlib and Aleppo. “Nusra has been an invaluable ally in our struggle against the regime, but the people are beginning to see that their real agenda threatens ours. Sooner or later, if Nusra continues its aggression, things will explode. Our patience cannot continue forever.”

Most significantly, civilians have risen up in protest against the group in Maarat al-Numan, holding near-constant demonstrations there since Saturday night. By Monday, the 13th Division flag had been re-hoisted by women and children in the group’s former headquarters and a Jabhat al-Nusra prison had been stormed and set on fire by civilians, freeing detained 13th Division fighters.

For the first time in Syria’s revolution, al-Qaeda appears to have overstepped the mark, provoking a genuinely popular backlash against its increasingly domineering role in the conflict. With international attention focused on the initiation of peace talks in Geneva, this invaluable opportunity to expose al-Qaeda’s malign intentions in Syria should not be missed. Many opposition Syrians, from across the ideological spectrum, have been increasingly concerned at Jabhat al-Nusra’s growing influence, but feared turning against it for want of a better alternative. Now is the time for the United States and its allies in the West and the Middle East to reinforce and encourage the conventional Syrian opposition. Without supplementary support, such protests will eventually face al-Qaeda’s unforgiving suppression, thereby breeding further and deeper resentment at a Western world seen at best as indifferent to Sunni Arab suffering and at worst, tacitly complicit in allowing it. In the long-term, such attitudes will only further benefit extremism.

Jabhat al-Nusra has proven an intrinsically smart political actor in Syria and as such, has very few significant weaknesses. However, a major source of vulnerability has now been revealed, as the group has struggled to retain its political-military primacy during Syria’s recent reduction in hostilities. ISIS has shallow roots in Syria, but Jabhat al-Nusra has embedded itself within the fundamental dynamics of Syria’s intensely complex regime versus opposition conflict. It is for exactly this reason that the war against ISIS has represented a “convenient obsession” for the West, as combating al-Qaeda in Syria is just that much more challenging. We ignore this new and invaluable opportunity to isolate Jabhat al-Nusra at our own risk, not to mention that of the Syrian people.