Japan’s Defense of Myanmar and the Rohingya Genocide 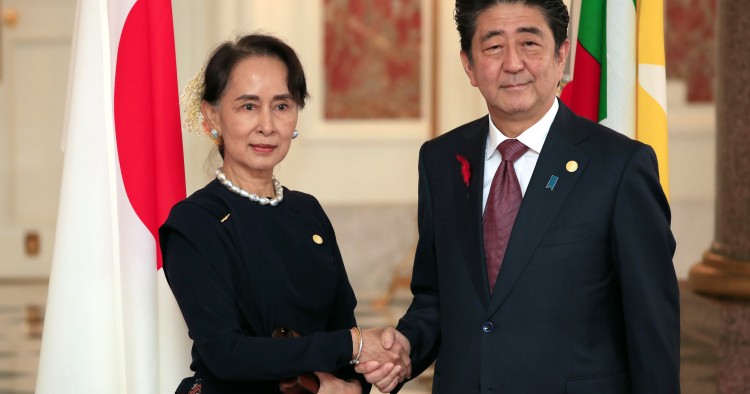 Sublime ideas are sometimes evoked for vulgar crimes. This art of sophistry and propaganda is not always performed as a solo. This paper analyzes a harmonious duet of Japan and Myanmar for the sake of the destruction of a Muslim group in the name of democracy and nation-building. The basic elements of the art are as follows.

Second, even when Myanmar intensified its campaign against the Rohingya after August 2017 to loot, rape, kill, and burn, Japan’s interest in the human rights situation of the Rohingya never went beyond “grave concern.” Even after the UN report in the fall of 2018, which detailed the patterns of a campaign of slaughter, Japan only reiterated “concern.”

Third, Japan has yet to admit that the atrocities in Rakhine are established facts. For Tokyo, they are still “allegations” of Human Rights violations. Expecting Myanmar to investigate the “allegations,” which Myanmar persistently denies, Japan welcomed the Rosario Manalo commission — started by Myanmar in 2018 — as the vehicle for conducting an investigation, and sees it as a progressive move.

Fourth, Japan cautions the world against pushing Myanmar on Rakhine for the reason that the Burmese democracy is budding and fragile. Arguably with limitless tolerance to Myanmar, Japan never mentions protection of diversity when it refers to the democracy to be built here.

Fifth, Japan promises it will “think together” and “fully support the nation-building’” of Myanmar. This exceptional camaraderie was proclaimed when the Rohingya villages in Rakhine were still burning in 2017. Japan does not reluctantly tolerate but pro-actively supports Myanmar.

Sixth, the term, “nation-building’” has a double meaning. It normally means the development of a modern state structure, but it also means economic growth. Members of the Japanese business community in Myanmar often say that they are proud that they are contributing to nation-building in Myanmar.

Seventh, Japan reiterates that the problem of Rakhine is “complex,” implying that the critique of Myanmar is unprofessionally simple.

The Burmese army is bolstering its solidarity with the NLD democratic government of Myanmar, and Japan is in harmony with that Myanmar. Myanmar, both its government and military, insists that there is no indigenous group identified as the Rohingya and that those Muslims calling themselves Rohingya should instead be called Bengalis — illegitimate interlopers from the Bengal area. Denying any Burmese persecution of the Rohingya, Myanmar procrastinates in its response to the deterioration of human rights in Rakhine by setting up the Kofi Annan Commission, the Advisory Board, and the Independent Investigation Commission. Aung San Suu Kyi says the country has only just started on its path toward democracy (i.e., since the 2015 election), and has little time to handle the many complex problems. Myanmar explains its doubtlessly planned campaign against the Rohingya as an anti-terrorist campaign it was forced to start against its own will.

The deepening of Japan-Myanamr economic ties goes on in parallel with the new wave of Rohingya persecution in Rakhine. In April 2012, Japan resumed its overseas development assistance (ODA) to Myanmar, after the start of reforms under President Thein Sein.[1] In May 2012, the latest attacks on Rohingya started in Rakhine.[2] In August 2016 the Kofi Annan Commission began its work, and in October 2016, the Harakah al-Yaqin (Arabic for “Faith Movement”), later the Arakan Rohingya Salvation Army (ARSA), began its activities in northern Rakhine.[3] In November 2016, Japan expressed its decision to give 800 billion yen in ODA to Myanmar for the next five years.[4] Myanmar could probably expect Japan’s incoming support when it started its attacks in 2012 on the Rohingya, and the person who planned the activities of the Faith Movement in the fall of 2016 could probably predict more Japanese support to come.

Japan mentions three reasons for its assistance to Myanmar: 1) Myanmar is a geographically important country between India and China; 2) Its market economy and stability are important for the ASEAN; and 3) the Burmese have had a pro-Japanese orientation.[5]

As a result of the new decision,

Myanmar is a country belonging to the South/Southeast Asian bloc, where neither America nor Europe dominates. The countries economically deeply involved in Myanmar have views benign to the Burmese persecution, basically on the so-called principle of non-interference. In this competitive environment, the rise of ODA from Japan has the following implications:

First, it can facilitate the Japanese companies’ investment in Myanmar and access to the Burmese market. This will make Japan more sensitive to the sentiment of the Burmese consumers who have been misguided by Buddhist extremism the military has unleased. Japan’s ODA makes Japanese companies advantageous, because their competition relates to recognition and permission by Myanmar.[8]

Second, it will likely make Japan protective of Myanmar’s political stability, in order to ensure that debt is repaid.

Third, it will make Japan oriented more toward economic growth than to human rights and democracy.

The list of Japanese businesses in Myanmar is similar to that of those big business contributors to the Liberal Democratic Party (LDP), the party in power. These companies and prominent LDP members have constructed several associations of Japan-Myanmar friendship,[9] which means that Japan can anticipate the needs of big business without being told.

The Japanese community in Myanmar is most conspicuously pro-Myanmar. In an interview, a Japanese company representative in Yangon repeats the Japanese embassy’s trite remark that the overseas reports on Rakhine are unfair and exaggerated. He also says that it is the Japanese deplorable inclination to stand by the weak side.

The current Japanese ambassador to Myanmar, Ichiro Maruyama, an old friend of Aung San Suu Kyi, says, using the term “the Bengali,” that

Japan’s most recent step was its joint organization with the Rakhine State Government and Myanmar Investment Commission (MIC) of the Rakhine Investment Fair in February 2019.[11] This means business goes to depopulated Rakhine to whitewash the stain of blood. The basic logic Japan upholds is that economic prosperity produces peace and stability.

The need to be a good intermediary between the business and Myanmar makes Japan befriend the powers in Myanmar, which can be far more easily done when Aung San Suu Kyi is a part of it.

This is clear when the Japanese ambassador, who claims to be directly connected to Aung San Suu Kyi by cellphone, says that the Japanese business in Yangon should feel free to approach him, as in countries like Myanmar, people cannot do business unless they talk directly with ministers.

With its population ageing and in decline, Japan faces a shrinking domestic market,  Its business needs expanding a foreign market. One such example is Kirin, a Japanese beer and soft drink company, which recently bought the Myanmar beer company. Kirin was criticized by Amnesty International for donating to the Burmese military in 2018, after its campaign in Rakhine.[12] The increase of local wages in China and Thailand motivates Japan’s business to migrate to Myanmar. The intensification of the China-Japan territorial dispute in 2012 accelerated Japan’s retreat from China.

With its technological progress, such as high-speed trains, China is becoming a substitute for Japan in infrastructure-building and as a business partner. This means that Japan is less willing to impose sanctions on Myanmar, because it means not a Burmese pain but a Chinese gain. As the case of the Cambodian economy now shows, Japan losing its competitive edge can use neither its money nor skill as a leverage over Myanmar. What looks like Japan’s morally submissive friendship to Myanmar can be explained by this looming shadow of China, which is proven to be amoral and more prevalent in Asia

The target of the human rights movement should include Myanmar’s supporters. Furthermore, the populations of such supporters need to be alerted and informed. For this purpose, Myanmar needs to be tried for a crime against humanity and genocide. If the legal procedures take time, they can be a wake-up-call for the Japanese, now dormant outside the bureaucratic politics of Japan’s Myanmar policy.

Greed needing fig leaves, the Burmese military and Japan shared common interests in camouflaging new Myanmar as a transition away from military dictatorship. This is why both need Aung San Suu Kyi. If Japan is more forgivable, it is because Japan’s retreat from this Myanmar may have called China deeper into this country without having a meaningful impact on human rights. Perhaps aware of this nightmare, Japan chose to be even closer to the arguably degraded Aung San Suu Kyi when Europe and North America began to strip her of honor.

The developed world was mistaken in rewarding President Thein Sein for his series of reforms in 2010 and welcoming the freedom of Aung San Suu Kyi and her victory in the by-election, instead of waiting for a few more years to reward the victory of the NLD in the 2015 national election and the start of an uphill battle that must be scheduled, including the protection of the Muslims. Nobody reproached the premature alliance of Japan with Myanmar, as it was trendy, and as business competition was intense. Countries whose economic involvement in Myanmar was relatively small, such as Canada, could see the situation more objectively, and took steps that were more easily reversible; however, Japan chose to live with Myanmar.

Human Rights must not be sacrificed for economic development. It is not proven that economic growth is good for Human Rights. Denial by a sovereign state of Human Rights violations should be categorically rejected when there is overwhelming evidence against it. And the world should use subscribe to the terminology used by Rohingya to refer to themselves rather than to that of their persecutors.

The Sustainable Development Goals (SDG) declares that no one should be left behind. In Rakhine, one million expelled to Cox’s Bazar, 13,000 internally displaced persons (IDPs), and the rest of the Rohingyas remain trapped. The principle of leaving no one behind is left maximally dishonored on the land where Japan is taking the initiative in international investment. The United Nations should audit investment and enforce SDGs in Rakhine, where Japan has been scheming with Myanmar to develop the sophistry of democracy and nation-building.

[2] “Burma ethnic violence escalates as villagers flee,” AP, appearing in The Guardian, June 12, 2012, https://www.theguardian.com/world/2012/jun/12/burma-ethnic-violence-escalates. Regarding events in 2012 in Arakan State, see Human Rights Watch, “‘All You Can Do is Pray’: Crimes Against Humanity and Ethnic Cleansing of Rohingya Muslims in Burma’s Arakan State,” Chronology of Events (April 2013): 21-42, https://www.hrw.org/sites/default/files/reports/burma0413webwcover_0.pdf.

[9] The Japan-Myanmar Parliamentary Friendship Association is a case in point.