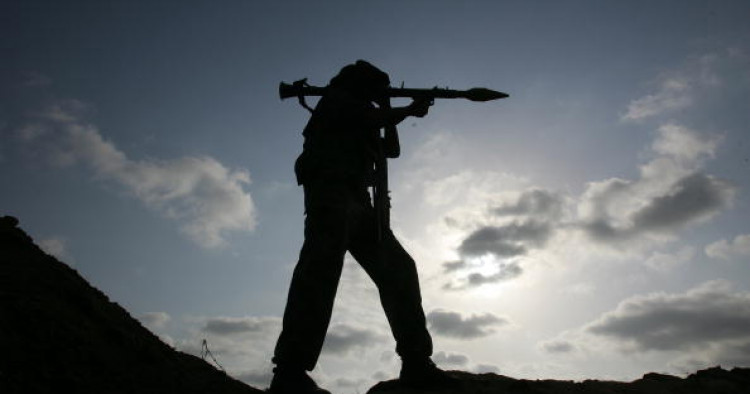 This article is part of a series that explores the threat posed by the Islamic State (IS) to Asia and efforts that the governments of the region have taken and could/should take to respond to it. Read More ...

The eruption of violence between Israelis and Palestinians in May 2021 brought the Palestinian issue to the forefront of Arab affairs, albeit temporarily.[1] Against this backdrop, it is interesting to consider how terrorist groups such as the Islamic State (IS) and Al Qaeda (AQ) reacted to this latest chapter of the Israeli-Palestinian conflict. Relying on formal communication from the respective media channels of both IS and AQ as well as English-language Telegram channels whose members belong to/support the IS and AQ, this article dissects the various narratives emerging out of these official and supporter channels and provides insights into their Israel strategy. It argues that heightened Israeli-Palestinian tensions could result in IS and AQ stepping up their rhetoric and recruitment efforts in other regional theaters, notably South or Southeast Asia, though without necessarily calling for attacks on the State of Israel.

A number of jihadist groups have made Palestine a central tenet of their political goals. Over the years, Al Qaeda, one of the most powerful global jihadist outfits, has often mentioned Palestine in its various communications. For instance, against the backdrop of then-US President Donald Trump announcing plans to move the American embassy from Tel Aviv to Jerusalem in 2020, Al Qaeda called for Muslims to move to Jerusalem.[2] However, the group has largely been inactive in the region.

Similarly, despite opposing multiple nations, Islamic State has rarely commented on Israel. While IS did inspire some attacks in Israel/Palestine in 2016,[3] its activities against the state were still not prominent and it has never managed to gain a foothold in the region. Interestingly, the former defense minister of Israel noted that fighters loyal to the group had apologized for firing a rocket into Israel.[4]

IS’ stance towards Israel changed however, in early 2020 when its spokesperson Abu Hamza al-Quraishi released a 37-minute audio note declaring a new phase whereby the group would now be focusing on Israel.[5] Yet, no new attacks or propaganda were pushed out, likely due to the increasing focus on the Covid-19 pandemic from March/April onwards.

Moreover, both the Islamic State and Al Qaeda have criticized Fatah and Hamas, the different actors who often claim to speak for Palestinians. This has in the past, prompted Palestinian figures like Yasser Arafat to criticize figures like Osama Bin Laden of exploiting the Palestinian cause.[6]

Current incidents being reported out of Israel, however, have led to a wide flurry of activities in the militant Islamist groups’ official as well as supporter channels. The following sections analyse the various narratives and targets emerging out of the officials and supporter channels of AQ and IS.

Al-Qaeda was quick to release statements condemning Israel’s actions against Palestine. The statements — typical of AQ’s media strategy — were released on its various official media channels such as the Global Islamic Media Front (GIMF), As-Sahab media and the AGH’s Al-Hurr media. Al Qaeda in the Islamic Maghrib (AQIM) — located in North Africa — took aim at Mahmoud Abbas (President of Palestine and the Palestine National Authority, or PA) describing him as a “secular traitor” and accused the PA of being in cahoots with the Israeli government. Further criticisms were aimed at the Muslim rulers for normalizing ties with Israel, forsaking the interests of the global Ummah.[7] Meanwhile, Al Qaeda’s Kashmir affiliated group, Ansar Ghazwat ul-Hind (AGH) used the Palestine issue to draw support for its cause in Kashmir. Comparing the situation in Kashmir to that of Palestine, narratives from AGH were Kashmir-centric, using the Palestine issues to spread a sense of crises to the Ummah everywhere.[8]

Hence, narratives from AQ and affiliate groups have focused on tying the narratives of crises in Palestine to the crises of the Ummah. Suggesting that the Jihad everywhere leads to the same destination, the statements largely aim to rally support by calling for a global response to unite under the banner of AQ to fight the oppressors.

Through its Al-Naba editorial issues 286 and 287, the Islamic State, similar to Al-Qaeda’s official narratives, has focussed on tying the situation in Palestine to the perceptions of crises faced by the global Ummah. Pointing to the example of the fighting in Syria (especially Idlib and northern Aleppo), the narratives try to underline the notion that no peace agreements can be reached with the oppressors and that fighting them is the only way to achieve justice for the Ummah.[9]

To that extent, like Al-Qaeda, the group has focussed on gathering support for its cause. Narratives aimed at Hamas were prominent, accusing the group of deviating from the proper jihadi ideology, embracing nationalism, and maintaining friendly relations with Iran and the apostate Muslim governments of Qatar and Turkey.[10] The Islamic State has also tried to mobilize supporters to engage in Jihad everywhere, suggesting that focussing only on the Palestinian cause is a betrayal of religious orthodoxy by placing one Muslim issue above the others. Consequently, the group has called for attacks on Jews and apostate Muslims everywhere.[11] As such, it is interesting to note that both these groups have not particularly focussed on the Israeli nation itself even though other communications by the two groups have been characterized by intense hatred of countries such as the US, India, and Pakistan.

Fan/supporter channels of militant Islamist groups function as vital contributors to the volume and reach of the group’s propaganda. Apart from disseminating official narratives, fan channels also create their own propaganda pertaining to their parent group, thereby increasing the volume of the total narratives output. Disseminating links to other working channels and providing precautionary measures to evade detection by the administrators of the encrypted platforms, fan channels help keep the propaganda machine running even when official channels are unable to do so. As such, having a look at these narratives reveals the degree of control that the official channels exert on their followers as well.

The narratives disseminated on AQ supporter channels have largely corresponded with the official AQ statements.[12] Derived from official narratives, the supporter channels have called on followers/sympathizers to join the banner of AQ and fight oppressors everywhere. The call for support was, for the most part region-specific, extrapolating the current situation of the Palestinians to that of the Ummah everywhere.

While the Islamic State’s official narratives on the Palestinian issue have been concise, the group’s supporter channels have disseminated a wide range of narratives aimed specifically at mobilizing sympathizers/supporters. Directed at similar targets, these narratives have focussed on providing examples to accentuate the perceptions of crises emerging from the Jewish population (which is in turn a product of their support from Western and apostate Muslim rulers).

Consequently, the narratives target the United States, as a key ally of Israel and a direct contributor to the plight of the Ummah. Several European nations, along with Australia and Canada are also criticized for their recent calls to boycott the United Nations conference on racism — aimed at demonstrating Israel’s apartheid on Palestinians.[13] Narratives against the apostate Muslim governments highlighted Turkey’s role in helping combat the 2016 wildfires in Israel by sending specialized aircrafts, as opposed to merely issuing statements of condemnation against Israel’s attack on Palestinians.[14]

Deviating from IS’ official narratives, its supporter channels have also targeted moderate Muslims who are criticized for merely sticking to social media platforms to condemn the actions of Israel and the Jewish population. By avoiding taking up arms to attack the perpetrators, the moderate Muslims are deemed responsible for the dilution of Islam and the plight of the Ummah. Prominent figures here include Dr. Yasir Qadhi, a Saudi trained American cleric with a degree from Yale.[15] Qadhi who commands millions of followers on social media sites has been frequently targeted by terrorist groups for his criticism of violent jihad.[16]

Tying these narratives of crises together and identifying Islamic State as the source of solution, its supporter channels have extensively called for attacks on the Israeli and global Jewish population. These narratives have gained traction among followers of the groups, who have expressed their clear intentions to commit violence against Jewish populations globally.[17]

Al-Qaeda seeks to project itself as a moderate avenue for settling grievances against the oppressors. Calling for imminent attacks and flooding narratives that anathematise everyone else, including fellow Muslims, fall under the purview of the Islamic State. Diversification of narratives simultaneously targeting friends, foes, and neutrals, to enhance the relevance and resonance of the narratives is central to the Islamic State’s IO operations.

Such strategies of the Islamic State have helped the group shape the information environment among its recruitment pool and helped mobilize large number of supporters from side-lines to action.[19]

While the two groups’ messaging is a small part of what other actors are trying to say against Israeli violence, IS and AQ have tried to position themself as the only effective voice. Interestingly, while both have taken similar official approaches as captured in their official communications i.e., to focus on other issues plaguing Muslims globally too as opposed to just Palestine, their supporter channels have issued differing statements.

While IS supporters called for attacks against Jews all over the world, AQ supporters toed the official line and encouraged people to join their affiliates since that eventually leads to attacks against Israel signifying a more decentralized supporter base for the Islamic State as opposed to Al Qaeda. As such, it is also telling that both groups and their supporter channels have avoided officially calling for attacks on Israel, a far cry from its otherwise vociferous attacks on other nations. Yet, while fresh outbreaks of Israeli-Palestinian violence might not translate into calls for attacks on the State of Israel, AQ and IS could nonetheless seek to exploit renewed violence in Israel/Palestine by stepping up recruitment efforts and operations in South and Southeast Asia.

[8] Based on statement released by AGH on its Al-Hurr media, gathered by the author monitoring the group’s channels on encrypted social media platforms such as Telegram.

[12] Based on monitoring of AQ supporter channels by the author on encrypted social media platforms like Telegram.

[13] “Canada joins US and Australia in boycotting UN’s racism conference,” TRTWORLD, May 10, 2021, https://www.trtworld.com/magazine/canada-joins-us-and-australia-in-boycotting-un-s-racism-conference-46600.

[17] Based on extensive monitoring of IS supporter channels by the author on encrypted social media platforms such as Telegram.