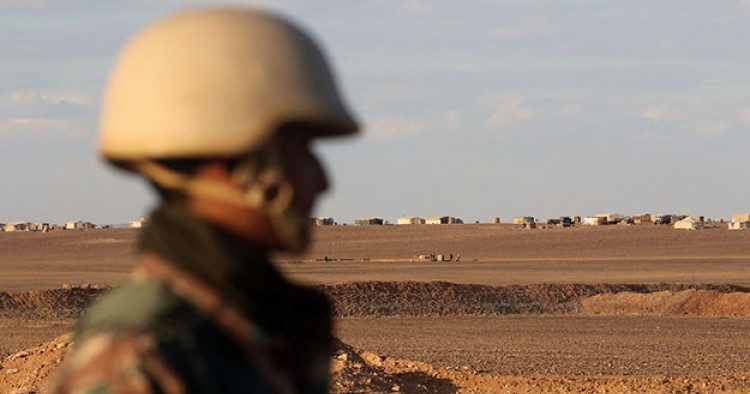 The Department of Defense (DoD) border security assistance programs in the Middle East region have helped partner countries to defend their borders against terrorist militia groups and other transnational security threats in the region. These programs set the standard for how the US military can foster long-term stability in the Middle East, while gradually drawing down its presence in the region.

Jordan, a close partner of the United States and a major non-NATO ally, has been working closely with DoD to enhance the country’s border security management capacities. Since 2009, DoD has provided Jordan with the technology, equipment, and training necessary for the Jordanian Armed Forces (JAF) to respond to terrorist attacks and incursions on the Kingdom’s borders.

Through the Jordan Border Security Program (JBSP), which lasted from 2009 until 2017, DoD’s Defense Threat Reduction Agency (DTRA) provided Jordan with an integrated surveillance detection and interdiction system along the Kingdom’s borders with Iraq and Syria. The JBSP’s main objective is to render JAF capable of deterring, detecting, and interdicting any illicit weapons of mass destruction (WMDs) that might be trafficked into Jordan.

The Jordan Operational Engagement Program (JOEP) was founded in 2014 and is one of the largest overseas training programs authorized by Title 10, U.S. Code, Section 333. Under the JOEP, the JAF receives 14-week individual and collective training sessions in “marksmanship, tactical first aid, map reading, land navigation, battle drills, how to deal with improvised explosive devices, sniper training, and several other soldier skills.” These trainings enhance interoperability between the Jordanian Army and the U.S. Army for combat operations and develop the JAF’s expertise and capability to deal with security threats on the borders. For example, in December 2019, the Washington Army National Guard trained the JAF - Chemical Support Unit (CSU) in chemical, biological, radiological, and nuclear safety tactics; the proper use of equipment; and identifying exposure to chemical agents.

Among the numerous security concerns on Jordan’s northern and eastern borders are the smuggling of conventional arms and of biological and chemical weapons from Syria’s suspected stockpile; narcotics trafficking; cross-border tunnels; Jordanian fighters returning from conflicts abroad; and unidentified drones. Chief among Jordan’s priorities in these regions is the fight against terrorism.

The protracted civil war in Syria in particular intensified Jordan’s transnational security threats, especially as the Syrian regime gradually lost control over its borders.  Syrian Refugees began fleeing into Jordan through official and unofficial border crossings. These were closed in June 2016 after an ISIL car bomb attack in the Rukbanborder area killed seven Jordanian border guards, leading Amman to place security concerns over commercial and humanitarian considerations. As a result, the no-man’s land between the Jordanian and Syrian borders turned into makeshift refugee camps.

Over the last decade, the JAF’s border security institutions and capacities went through an intense period of development motivated by security dynamics in neighboring countries and funded by foreign military assistance. While the internal security apparatus is responsible for managing official border crossings and export-control-related issues, the JAF is responsible for defending the country’s borders against attacks as well as infiltration and smuggling into and out of the country.

In 1986, a number of border guard companies organized under the name of the Badia Command and Border Guards, which joined the JAF in 1997. Gradually, these guard forces evolved from disconnected battalions assigned to specific regions in the country into four brigades. It wasn’t until 2012 that the Border Guards Command was formed. Following recent military restructuring, the JAF established a robust and centralized directorate for border security equipped with an integrated security system. The directorate is responsible for coordinating the border guards’ units and formations, which has greatly enhanced the agency’s efficiency.

The Directorate of Border Security is home to several commands and centers that support guard units dispatched along the borders. These include the Electronic Surveillance Group Command, the Civil-Military Coordination Center, and a training center that prepares border guards to deal with various situations, such as humanitarian operations in coordination with international organizations.

Three of the main challenges for border guards patrolling the northern frontlines have been the sheer length of the borders, the ruggedness of the surrounding terrain, and a lack of proper infrastructure, such as housing or roads connecting patrol sites. In 2019, the JAF announced the construction of 29 buildings, including residential units, with access to electricity and roads.

In 2014, the JAF established a Quick Reaction Force (QRF) comprised of army and air force units attached to different commands in the country that can be deployed rapidly in response to attacks along the borders. In 2017, the force became known as a rapid reaction brigade and later in 2018 was renamed the “Sheikh Mohammed Bin Zayed Al Nahyan Rapid Intervention/High Readiness Brigade.” The combination of air and land mobility is key to the effectiveness of this force, which is why the the United States provided the Royal Jordanian Air Force (RJAF) with both Sikorsky UH-60 Black Hawk helicopters and land vehicles. In order to integrate air and ground forces, the JAF established a unified helicopter command. The force has also recruited women pilots, who deploy side by side with men, as well as a women’s engagement team to “conduct inspections on women, provide first-aid and provide assistance.”

According to Jordanian local media sources, since JBSP became fully operational, there has been an increase in the number of explosives and drugs intercepted at the border. Newspapers and other media in Jordan play an important oversight role in regard to border security, as journalists conduct field visits to border areas to report on the JAF’s capabilities and performance as well as the overall security dynamic.

In 2017, American and Jordanian experts held an Advanced Research Workshop to understand Jordan’s strategy, capabilities, and needs for border security. The workshop resulted in critical recommendations, such as the “facilitation of a policy review process and [establishment of] a requirements orchestration effort.” A similar workshop was held in 2019, this time with NATO partners and international organizations in addition to American and Jordanian participants. Together with the United States, the United Kingdom, Canada, and Germany are three NATO allies that actively support Jordan’s border defense programs.

US military assistance programs have been successful in growing Jordan’s capability to defend its borders against transnational security threats and eliminate terrorist groups. Continued security assistance and cooperation with the United States and NATO allies are essential until Jordan’s nascent border defense capabilities no longer depend on the United States.

External threats to Jordan’s borders and regional security dynamics have defined the country’s border defense priorities without a clear policy or review process around determining border defense requirements and facilitating interagency coordination. Absent parliamentary oversight and control, the JAF Joint Chiefs of Staff and the government must engage in a larger conversation about Jordan’s border defense policy, budget planning, and investments.

Moreover, long-term institutional development requires standardized and well-defined metrics that can accurately measure the force’s readiness and status. Assessments and accurate data are essential to the future of border security institutions.

Developing a well-trained force through the Directorate of Border Security training center and through cooperation with Jordan’s international partners is key to the future of these newly developed institutions. Most importantly, the JAF will need to continue training and recruiting a tech-savvy force able to maintain and employ sophisticated systems of technology.  The JOEP’s efforts at training border guards in essential skills are invaluable, but the JAF should also develop its own training capabilities and systems to ensure self-reliance and continuity.

Jordan today is well-positioned to lead regional efforts by sharing best practices drawn from its experience in border defense operations. The Directorate of Border Security possesses the institutional capacity to host and organize multilateral courses and provide joint environment trainings and workshops tailored to the Middle East context. For this purpose, the JAF could grow its cadre of military and civilian trainers in cooperation with universities and think tanks in the Kingdom and the region. Such multilateral and international cooperation is essential for the future of the Middle East . Because of its unique strategic location, balanced regional relations, and growing defense capabilities, Jordan can play a major role in the quest for regional stability and the response to changing security dynamics.

Ms. Kawar served as a Faculty Associate of Education for the National Security Affairs Department at the Naval Postgraduate School (NPS) for four years. She also served as a guest lecturer at the Institute for Security Governance’s workshops in the United States, Jordan, and Lebanon. Her research focuses on issues related to transnational security, security sector reform, and women’s evolving role in the military. The views expressed in this piece are her own.