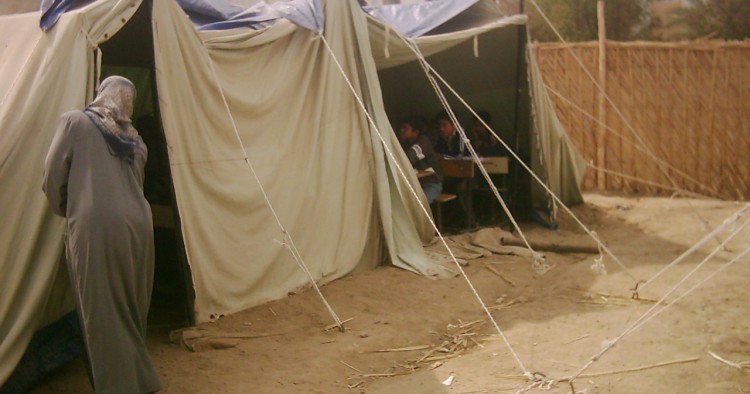 Between 1990 and 2002, Iraqis came to Jordan in great numbers. According to the Jordanian Department of Statistics, by 2002 the number had reached nearly 300,000. Over that period, Jordan was also the main transit point for the more than 700,000 Iraqis to whom Western countries granted refugee status or other forms of asylum, or who were received within immigration regimes. By the Department of Statistics’ account, those who came to stay in Jordan after 2003 are no more than 200,000. Tens — if not hundreds — of thousands of those who were in Jordan in 2002 or who came in the following years have since proceeded to Western or other Arab countries.

The number of Iraqi exiles in Jordan is bound to diminish further now that the borders have been closed except to visa holders. This is not because most will return but because they are ideal candidates for secondary migration: predominantly belonging to the educated urban middle class and lacking social and economic opportunities in Jordan, Iraqi exiles are prone to respond to the pull of family and other social ties from within distant diasporas that reached a critical mass and global scope during the 1990s. The dynamics of chain migration is currently so strong that neither changes in the situation in Iraq nor stringent access policies by Western countries are likely to reverse the trend of out migration from the region. Only those who do not have sufficient connections in distant diasporas or lack the financial or educational capital to compensate for weak transnational ties will stay in Arab host countries or return to Iraq. Alternatively, a small number of political or economic entrepreneurs will keep using Arab countries as regional bases for activities that span several national boundaries in the Middle East and beyond. This hypothesis, congruent with theories of migration and transnationalism, challenges the relevance of such concepts as return and repatriation for those whom international agencies categorize as refugees.

Jordan, like most other Arab countries, has received Iraqi exiles as temporary guests within a discretionary toleration regime grounded in eroded commitments to Pan-Arabism. The large majority have lacked legal residency and consequent social and economic rights. Despite the scale of the migration in the pre-2003 period, Jordan was spared international pressure to provide Iraqis with assistance. The situation was reversed after international and non-governmental organizations took up the issue of Iraqi displacement as part of a discourse on the illegitimacy and failure of American intervention in Iraq. However, Jordan has managed to channel international assistance in a way that most likely will not affect the conditions and migration trends of its Iraqi guests.

On the occasion of the April 2007 UN conference on displaced Iraqis in Geneva, Jordan claimed that 750,000 Iraqis were residing there, costing the country $1.6 billion a year. Jordan called for international support to alleviate this “burden” on the national economy, but opposed the idea of a parallel aid system. In response to this call, the government hadreceived (as of late May 2008) $58.3 million in bilateral or multilateral aid to improve facilities in sectors subsidized by public funds. The United Nations High Commissioner for Refugees (UNHCR), having until then unsuccessfully advocated for a temporary protection regime for Iraqis it defined as refugees, reframed its operations: In 2007, 61% of the agency’s operational budget for Jordan was given directly to the Ministries of Health and Education in addition to direct assistance provided to underprivileged Jordanians alongside Iraqis. For its part, the Ministry of Social Development mandated that international nongovernmental organizations (NGOs) operating programs for Iraqis in Jordan should ensure that at least 20% of their beneficiaries were poor Jordanians.

The Jordanian authorities have made government schools and the public health system accessible to all Iraqis since 2007. Nevertheless, it is evident that the figures they use in funding appeals are grossly inflated and that the number of Iraqis who use the services of the public sector and of international NGOs remains comparatively very low. Fewer than 20,000 Iraqi children are enrolled in public schools; few individuals approach public health services, and no more than 60,000 use assistance programs operated by NGOs.

On the domestic stage, the Jordanian government’s position vis-à-vis Iraqi guests continues to be expressed exclusively in terms of concerns for national security in the face of terrorism, crime, and other threats that could spill over from Iraq. Calls for international support include security and precaution measures for which national expenditures have increased by 20% since 2005, allegedly to prevent terrorist attacks from foreign elements but also, one may contend, to suppress domestic discontent that could ensue from a deteriorating economic situation. While public subsidies are being lifted on basic goods and inflation is rising (from 1.6% in 2003 to an expected 9% in 2008), the purchasing power of the traditional middle-class is plummeting, 13% of Jordanians live under the poverty line, and at least 14.5% are unemployed.

Presented as “burden-sharing” for Iraqi refugees, the current assistance framework does not provide for a binding contractual mechanism that would make Jordan accountable to donors for an equitable allocation of aid to Iraqis, nor for granting them a wider set of rights — in particular residency and legal access to jobs. Jordan has in fact imposed a development approach that meets its priorities of alleviating the effects of economic reform on the Jordanian population and tightening security measures. In doing so, Jordan continues to be functionally a rentier entity in which foreign aid goes to consolidating national institutions and the regime with the acquiescence of donors.

All parties, Jordanian officials have declared, “must work on facilitating the appropriate conditions that will ensure the return of Iraqis to Iraq” in the shortest possible term. More likely, the approach taken provides conditions that will ensure the secondary migration of Jordan’s guests to other, mostly Western, countries in the short or medium term, in a continuation of the pre-2003 trend. This is not quite the outcome envisioned by those who, in the 1990s, conceptualized “burden-sharing” as the containment of refugees in their regions of origin.