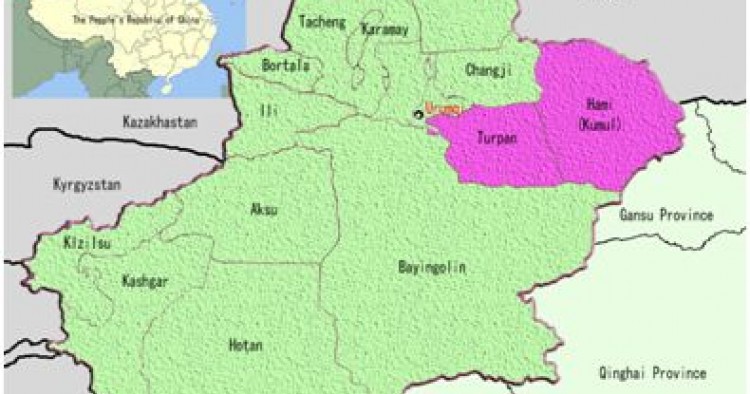 The water harvesting and underground transmission system called a karez in the Uygur language, or kan er jing in Mandarin, has provided sustainable water supplies in some communities of the Xinjiang Uygur Autonomous Region (Xinjiang), China for over 2,000 years.[1] These water systems have also been used in countries in North Africa and West Asia, as well as other Asian countries, including Afghanistan, Iran, and Pakistan.[2]

The karez is an impressive hydraulic engineering project as well as a cultural achievement. In China it was recognized as one of three major ancient engineering projects, along with the Great Wall and the Beijing-Hangzhou Grand Canal.[3] Because the karez system has provided a safe and reliable water supply over the centuries, the communities that rely on it have referred to it as the “mother river” and “spring of life.” This is particularly true in the Turpan and Hami prefectures in Xinjiang, where most of the region’s karez systems are located.

However, karez systems have faced great challenges over the past several decades, including drying up, abandonment, damage, and pollution as a result of over-exploitation of groundwater through deep wells, the construction of reservoirs upstream, the development of oil fields, and other human and natural activities. In recent years, the United Nations and national governments have raised concerns about and recognized the importance of karez systems. Works have been planned and implemented to revitalize some karezes for use and to preserve some for cultural purposes.[4]

Karezes depend on factors such as climate, topography, hydrology, geology, and nearby agricultural activity. The karez system has been used to provide water for both domestic purposes and agricultural irrigation because it possesses the following advantages: it is gravity-fed, so it avoids energy requirements; its underground transmission reduces evaporation; and its underground coverage protects against sediment from wind storms in the desert and assures good water quality.

In most cases, the karez system is not only a structure to extract groundwater, but is also an integration of the history, culture, and unique knowledge of its builders. Karezes have created strong cohesion in their communities owing to the traditions and beliefs attached to them. Religious beliefs and cultural traditions also helped the karez system to be handed down as a legacy.[5] In the past, the social arrangements in karez-based communities were directly related to the karez system.[6] Essentially, people’s importance and value were judged according to their water ownership rights in the system. A household’s proximity to the system was a good indicator of the social or economic status of its residents.

The karez system is an important part of the ecosystem as well, as karezes provide water for native vegetation and play an important role for the survival of wildlife by providing habitats through underground tunnels, shafts, and pools.

In 2003, there were over 1,784 karezes with 5,272 km of underground channels in Xinjiang.[7] Among them, over 97 percent were located in the Turpan and Hami prefectures (Figure 1). Unfortunately, only 614 of these karezes were still flowing. Indeed, karezes have been disappearing at a shocking rate of 20 to 30 per year.[8] 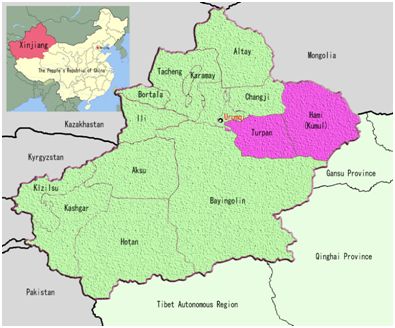 Karezes in Turpan and Hami are made up of vertical shafts, underground tunnels, and above-ground canals and storage ponds. Melted water from glaciers and snowmelts from the northern and western Tian Shan Mountains are their major water source. The length of the horizontal underground tunnels varies greatly, from 3 km up to 50 km. The size of the tunnels is between 0.5 to 0.8 m wide and 1.2 to 1.8 m high. The vertical shafts are located approximately 10 to 20 m apart in the lower reaches and 30 to 70 m apart in the upper reaches for ventilation and maintenance. A storage pond located at the end of the horizontal channel is used for keeping water at night and may also be used as a means for measuring and dividing water among different users.[9]

Most karezes were constructed in semi-arid regions with high evaporation rates that receive small amounts of average annual precipitation. The Turpan Basin has a continental and extremely arid climate, with average summer temperatures reaching 38 °C and low annual precipitation of 9-25 mm (Figure 2). Such conditions make Turpan an ideal place for developing a karez irrigation system.

Figure 2. Temperature and precipitation in Turpan, Xinjiang from 1971 to 2000 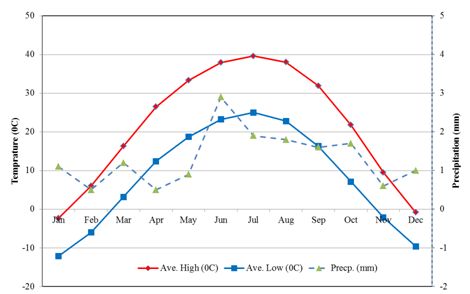 Modern Technology and the Karez System

With advances in irrigation technology, deep wells have been drilled to pump groundwater to meet growing demands for household and agricultural use as well as the development of oil fields in the Turpan area. As a result, the groundwater level in a shallow aquifer, from where a karez system draws its water, continues to decline. According to Guan et al, groundwater had declined 25 meters over 10 years in some areas of the Turpan Basin.[10] In turn, karezes lost their source water and went dry.

This is a typical example of the Javons paradox, which occurs when technological progress facilitates exploiting a resource and thereby increases the rate of consumption of that resource.[11] With advances in pumping and irrigation technology to improve efficiency, we have seen an increase in the consumption of limited water resources in arid regions such as Turpan. The repercussion is that the groundwater reserve is being mined much faster than the aquifer is being replenished.

However, the karez system has its own limitations that curb its ability to compete with new technologies, such as a low discharge rate and—despite its low level of technology—intense labor requirements and high costs for construction and maintenance.

With karezes disappearing at an alarming speed, the United Nations and national governments have raised concerns about their preservation. To protect the historic and cultural value of the karez system, multiple measures have been undertaken by agencies in Turpan. These include establishing and implementing government rules and regulations for the protection of karez systems, designating select karez systems as protected areas, controlling the development of surface water systems at the headwaters of a karez, and curtailing the exploitation of deep groundwater in areas where the karez system will be preserved.

To continue to utilize the karez system, we recommend that it be considered an important component of the new framework in integrated water resource management. This framework promotes the coordinated development and management of water, land, and related resources in order to maximize their resultant economic and social welfare in an equitable manner without compromising the sustainability of vital ecosystems.[12]

Efforts have also been made to preserve the karez system as a UNESCO World Heritage Site. Nowadays, the karez systems in Turpan attract thousands of Chinese and international tourists. In fact, a museum has been established to showcase the karez system in Turpan. Because karezes constitute a global heritage of human civilization, such international cooperation to protect karezes and to formulate strategies and technologies for their continued utilization should be encouraged.

It is inevitable that karezes will continue to face challenges as technology progresses. While technical approaches have been developed to protect the integrity of the physical structure of the karez system, policies and institutional measures should also be established and enforced to reduce the impact of human activity and modern technology on it. With local efforts and international cooperation, such an ancient system can not only be preserved for future generations, but also continue to serve as a powerful tool in sustainable development.

[9] Haakon, L. and Shen, Y., “The Disappearance of the Karez of Turpan,” Report from the project, “Harvest from Wasteland: Land, People and Water Management Reforms in the Drylands of Xinjiang,” Acta Geographica, Series A, Number 15 (published by the Department of Geography, University of Trondheim), 2006.