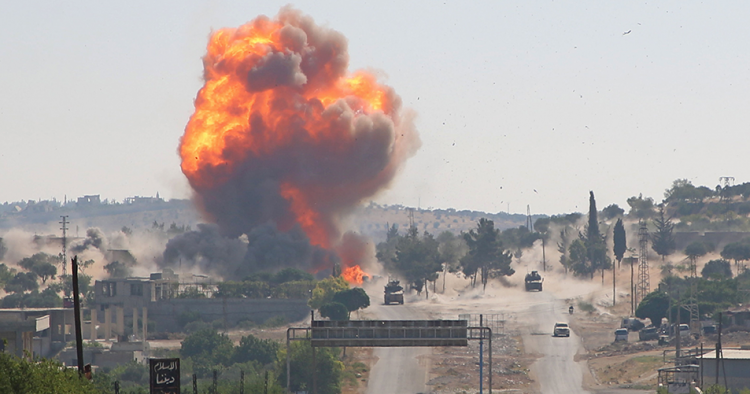 Foreign fighters have played a major role in Syria’s ongoing conflict, with a presence in the country that numbered in the tens of thousands at its peak. One of the most mythologized sources of foreign recruits has been Chechnya, the once-separatist province of Russia’s North Caucasus that was reconquered by the Russian army in the early 2000s. Several thousand Chechen fighters traveled to Syria to fight in various opposition and Islamist factions, where their battlefield prowess made them a prized commodity among Syrian rebel militants.

The fortunes of most Chechen fighters, however, like the Syrian rebel movement as a whole, have been at a low ebb in recent years. With the opposition largely confined to Idlib for the past three years, there have been few opportunities for the remaining Chechens in Syria to make an impact.

That’s what makes the apparent emergence of a new Chechen faction so intriguing. On July 14, reports emerged that a group calling itself Kata’ib Khattab al-Shishani (“Khattab the Chechen’s Brigade,” or KKS) had claimed responsibility for a suicide car bomb attack on a joint Russian-Turkish patrol in Idlib. The claim seems to have first appeared on the group’s Telegram channel, with an Arabic-language post showing three photos of the explosion striking a Russian armored vehicle. KKS created its Telegram a month earlier, on June 16, and immediately thereafter used the messaging platform to claim responsibility for an improvised explosive device (IED) bombing of a Russian military vehicle. A third IED attack was claimed by KKS on Aug. 17, while the fourth and final such attack to date came on Aug. 25, when another Russian-Turkish joint patrol was struck by a roadside bomb.

Despite this seemingly regular activity, little is known about the group itself. The apparent logo of the group, which was first posted on its Telegram channel, features strangely disjointed Arabic characters similar to those that appear when a word processing program does not support Arabic script. This is a strange error that would not go unnoticed by anyone with a passing familiarity with the language, let alone enough command of it to write the group’s lengthy claims of responsibility. No members of the group have ever appeared in a photo or video — there is no video of its leader and other members announcing its formation, for example — with one exception. In one of the two videos the group has released so far, an alleged suicide bomber (with his face blurred) reads a short script in Arabic. One might expect the man to speak with an obvious Chechen accent, but he doesn’t.

There are other reasons to believe that the group is more fiction than fact. The name itself is odd — it is a clear reference to Ibn al-Khattab, the infamous Saudi mujahid who fought in Chechnya alongside Islamist rebels, serving as the overall commander of Arab foreign fighters until his death in 2002. Khattab himself, however, was not Chechen, nor did he ever claim to be — a fact at odds with the group’s name, which refers to him as “Khattab the Chechen.” The group does not lionize or even mention Khattab’s exploits on its Telegram channel, even though Khattab and his close ally Shamil Basayev remain legendary figures among many Chechen Islamists. Kavkaz Center, a longstanding North Caucasian Islamist media outlet supportive of the al-Qaeda-aligned Caucasus Emirate, has repeatedly claimed that the group does not exist, branding it a “fabrication.” The only serious attempt to explain the group to date appears to have been a long read by RIA FAN, a Russian news agency owned by Yevgeny Prigozhin, head of the infamous mercenary outfit Wagner Group. This text concludes that KKS is an ISIS “sleeper cell,” but provides little evidence for the claim. Its other notable assertion is more probable: that this group, if indeed it exists on the ground, may operate largely in the environs of Ariha, a town firmly controlled by Hayat Tahrir al-Sham (HTS). KKS has yet to claim any attacks outside of this area. These attacks on Russian and Turkish convoys, then, no matter their true perpetrators, have occurred in areas heavily influenced by HTS, which raises questions as to whether the group has been aware of them or even permitted them to happen.

“We really have never heard of [KKS] before”

The most damning indictment of KKS's bona fides, however, is that no Chechen fighters in Idlib seem to have ever heard of the group. Researcher Joanna Paraszczuk, who runs the website chechensinsyria.com, published an interview on Aug. 17 with Abu Abdullah al-Kavkazi, a North Caucasian jihadist who has been fighting in Syria for upwards of eight years. Al-Kavkazi affirms that “we really have never heard of [KKS] before,” and puts forward the same theory as RIA FAN: that the group could be an ISIS-affiliated sleeper cell. His views fit with those of a Chechen fighter with the “jihadi private military contractor” Malhama Tactical, who spoke with the author on condition of anonymity. This individual also said the group was “almost certainly” fake, and that neither he nor others in his organization believed it was a new Chechen (or Chechen-led) formation. He believed that the recent Russian convoy attacks claimed by the group were in reality conducted by “a state whose interests will be advanced by this.” The fighter’s intentionally vague wording could have implied ISIS as much as an international actor; he did not elaborate.

What then to make of KKS? To this analyst, the group evokes memories of the “Imam Shamil Battalion,”which claimed responsibility for the April 2017 metro bombing in Saint Petersburg, Russia — a group with a generic North Caucasian Islamist title that appeared out of nowhere and disappeared just as quickly, with no evidence of Chechens or other North Caucasians in its ranks ever emerging. Intriguingly, Russia accuses the Syria-based founding leader of Katibat al-Tawhid wal-Jihad (KTWJ), Sirozhiddin Mukhtarov (Abu Saloh al-Uzbeki), of being responsible for the St. Petersburg attack — possibly indicating that the Imam Shamil Battalion was an invented front for KTWJ.

It remains to be seen whether KKS will continue to carry out monthly attacks as it has so far; in the event that it does, it will be worth considering further, especially as a potential ISIS cell in the province. Until then, it is essentially contemporary Idlib’s version of Voltaire’s “Holy Roman Empire” — a construct that is neither Chechen, nor a brigade, nor even existing in reality beyond words on a screen.

Neil Hauer is an independent analyst focused on Syria, Russia, and the Caucasus. Based in Tbilisi, Georgia, he served as senior intelligence analyst at The SecDev Group, an Ottawa-based geopolitical risk consultancy, for three years. He is presently engaged primarily on Russia’s role in the Syrian conflict. Follow him on Twitter at @NeilPHauer. The views expressed in this piece are his own.