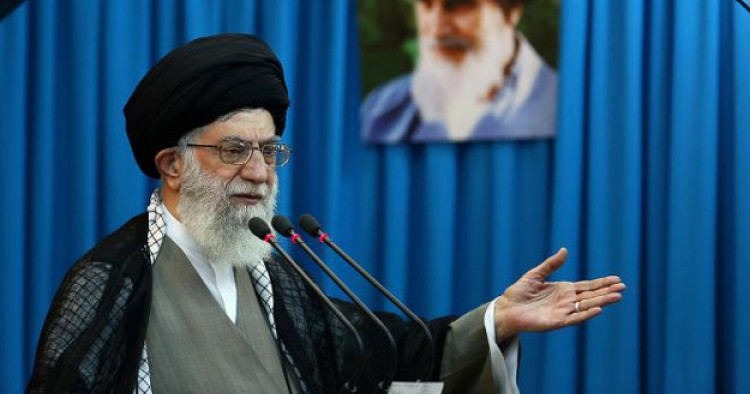 Iran’s Supreme Leader Ali Khamenei said Iran opposed the presence of American forces in Iraq and urged Iraqi Prime Minister Haider al-Abadi not to rely on Washington. “Do not trust the Americans under any circumstances because they are waiting for an opportunity to do harm,” Khamenei said in a meeting with the visiting Iraqi prime minister in Tehran on Tuesday. The supreme leader accused the United States of sowing discord in Iraq for its geopolitical interests and added: “They should not be given this opportunity. Also, the deployment of American forces to Iraq under the pretext of training and other matters should be avoided.” The top Iranian leader also voiced support for the Iraqi Popular Mobilization Forces (P.M.F.) – the paramilitary forces also known as Hashd al-Shaabi – and cautioned the Iraqi prime minister not to listen to American advice on weakening or disbanding the force after the defeat of the Islamic State. “The Americans oppose the Popular Forces because they want Iraq to lose its main pillar of power,” Khamenei emphasized. He also accused Washington and its regional allies of aiding the Islamic State.

Comment: With the Islamic State in Iraq on the verge of defeat, Tehran eyes consolidating its military and political gains in the Arab country and sees the presence of American forces there as the biggest obstacle to its regional ambitions.

Recently, Iranian-supported Shiite armed groups within the P.M.F. have also intensified propaganda against the United States and begun to call on the American forces to leave Iraq. “The international coalition has not assisted Iraq other than killing civilians and helping terrorists,” P.M.F. Spokesman Ali al-Husseini said in an interview with Fars News Agency, an Iranian outlet affiliated with the Islamic Revolution Guards Corps (I.R.G.C.). “The coalition has also had a role in supporting Daesh [Islamic State]. In addition to providing military and logistical aid to this terrorist group, it has also played a role in helping its members to escape,” he further alleged. “The Iraqi Popular Mobilization urges the Baghdad government to expel the international coalition from the Mosul battle and oppose Pentagon’s deployment of more American soldiers to Iraq,” he concluded.

The latest escalation in propaganda raises the fear that the Iranian proxies are likely to redirect their focus on undermining the U.S. interests in Iraq once the Islamic State – the common enemy – is ousted from Mosul.

The P.M.F. consists of militia units largely from Shiite but also other Iraqi ethnic and religious groups. While some P.M.F. units are Iraqi nationalists and follow Iraq’s top cleric Grand Ayatollah Ali Sistani, many prominent groups within PMF have close ties with Qassem Suleimani, the head of the I.R.G.C.’s elite Quds Force.