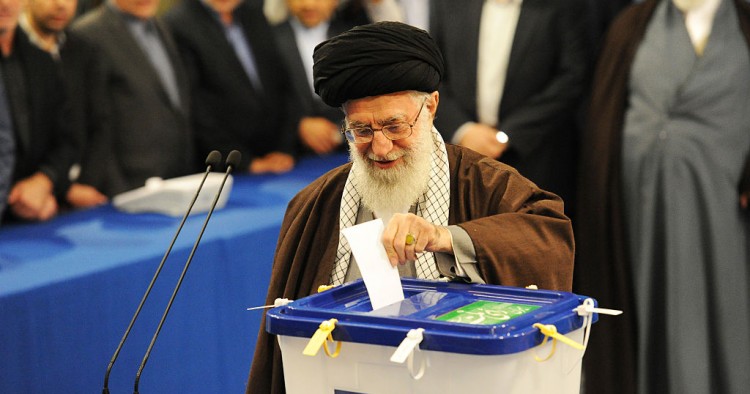 Iran’s once promising reformist movement is in a death spiral. It is not because the idea of reform has lost its appeal. On the contrary, the average Iranian today is as eager to see political change as ever. But they have no reason to believe gradual reform is possible. This pessimism is not only grounded in the reform movement’s long track record of failing to make a difference, but it is also exacerbated by the current diabolical condition of the movement’s leadership.

When reformist Mohammad Khatami was elected president in 1997, Western leaders and the majority of Iranians who voted for him — almost 70 percent — believed the Islamic Republic might just be able to change itself from within. There might be no need for another bloody revolution as in 1979, a foreign military intervention, or anything in between, the thinking went. Political reform in Tehran would certainly be gradual and piecemeal, but its advent was beyond question. That turned out to be a massive case of wishful thinking, however. Over two decades later, the same unelected supreme leader, Ayatollah Ali Khamenei, backed by the arms of the Revolutionary Guards, exercises near absolute political control. In the Islamic Republic, the power of the ballot box is an illusion. Meanwhile, instead of confronting Khamenei, and looking back to see where they went wrong, the leaders of the reform movement have their knives out for one another, paving the way for the supreme leader to keep pursuing his political agenda as he sees fit.

Reformists and moderates fighting one another

The fight within the reform and moderate camp today is not about new ideas. It’s about who should take the blame for the abject failure of the movement’s leaders to make a difference. Two central figures in this fight are President Hassan Rouhani and former President Khatami. Seven years after they first helped Rouhani win the presidency, there is no reason for the reform movement to stand by the mercurial president now since he’s done next to nothing to advance the cause of political reform in Iran.

As reformist personalities have distanced themselves from Rouhani, with many openly expressing deep regret for having backed him in 2013, there is still no agreement as to who should take up the mantle as the leader of the reform camp. This is where Khatami’s name comes up as the movement’s intellectual pacesetter or even as a potential returning president. The two-term president (1997-2003) is a divisive figure, not just among Iranians in general, but even among reformist and moderate leaders. Put simply, his supporters see him as the most viable candidate to continue to carry the banner of political reform. Khatami’s detractors, however, see him as too meek and deferential to Khamenei and out of touch with the younger generation of Iranians who were not even born when he first became president in 1997.

By and large, prominent reformist personalities now openly accept that they no longer appeal to the general public. In particular, the youth are thought to have given up on the idea of gradual reform. Instead, they are increasingly turning to political messages – mostly articulated by the political opposition in the large Iranian diaspora — that speak to the regime’s inability to reform and the need to replace the Islamic Republic altogether. Ayatollah Khamenei keeps feeding this angry sentiment. In the last elections for the Majlis (Parliament) this past February, most reformist incumbent deputies and aspiring candidates were banned from running by the Khamenei-controlled Guardian Council, the regime’s vetting organ.

Keeping up appearances, but to what end?

Despite the movement’s unmistakable failings, reformist leaders still pretend they matter. In what appears to be a deliberate campaign to maintain some degree of political relevance, they are constantly vowing that a new strategic reorientation in their policy platform will soon be unveiled. The recognition of the need to “move closer to the people” is a clear admission by the reformist camp that they have lost the trust of the public. And yet, despite the talk of strategic reorientation, the reform movement only has as much power as Ayatollah Khamenei is willing to let them have.

Over the next few months, we’re likely to see Iranian media accounts of splits inside the reform and moderate camps. Names such as Mohammad Reza Aref, Gholam Hossein Karabaschi, and Mostafa Kavakebian will be mentioned as part of a struggle to shape the reformist agenda. These are among the top voices in Iran that espouse reformist ideas, but they don’t always see eye to eye. This struggle might have an impact on where the reformists will go as a political camp, but their camp has no control whatsoever over where the Islamic Republic is going in its policies.

This reality takes us back to Ayatollah Khamenei, the master puppeteer of the Islamic Republic. The supreme leader, forever looking for ways to convince the world that he is not overseeing a dictatorship but an “Islamic” system of democracy, might have to create some political excitement in the lead-up to the 2021 presidential elections. If so, he will probably want to keep some prominent reformist personalities in the running as proof that the elections are competitive. This is, of course, all a ruse.

Khamenei might even consider bringing back Mahmoud Ahmadinejad, the rightist populist who in his second term (2009-13) stood up to Khamenei. The supreme leader will make sure he doesn’t win the presidency, but he knows that even the mere mention of Ahmadinejad’s name might just boost interest in the 2021 elections. After all, Ahmadinejad still retains a small base of popular support in Iranian society. The last thing Khamenei wants is for Iran’s elections to lose their credibility entirely, although this has in effect already happened. In his mind, that would make the Islamic Republic no different than say the Taliban in Afghanistan and him a sort of Mullah Omar. That is not the kind of political space Khamenei wants to occupy.

Khamenei desperately wants the Islamic Republic to maintain the façade of “republicanism” (i.e. holding general elections that are perceived to be competitive). That’s why he would want to see some reform-linked candidates or a maverick like Ahmadinejad stick around on the stage. It’s all part of the political show he is orchestrating. His red line, however, is being directly challenged. Take the example of Ali Motahari and Mahmoud Sadeghi, two members of the Majlis who questioned the extent of the supreme leader’s power and the problem of endemic corruption that Khamenei has for years tolerated. Both men were barred from running for Parliament again, and in the case of Sadeghi, sentenced to a 21-month prison term. But if you play nice, and without crossing his red lines, Khamenei sees value in maintaining the perception that there is a real marketplace of political ideas as long as he can regulate it and make sure it doesn’t turn against him.

And it seems Iran’s subservient reform and moderate leaders will probably just play along. They are not concerned about delivering actual results to the voters, only appearing as if they matter. For months the rumor mill in Tehran has been abuzz with talk that the reformists might even ask Foreign Minister Javad Zarif to run for president in 2021. He is viewed as a reformist and the reformists have no other major personalities to put up in the next presidential elections. In fact, because the reform movement has repeatedly failed to deliver on its political promises — both Khatami and Rouhani promised far more than they could possibly deliver — the only hope they have now is to create some excitement around a known personality.

For sure, Zarif is a known public figure and is seen to be closer to the reformist camp. But he’s also a loyal foot soldier of Khamenei. He will not be any different as president than Rouhani or Khatami in respecting the supreme leader’s wishes. Which is exactly why a Zarif presidency might become a possibility — because it isn’t a threat to Khamenei. In fact, Khamenei might welcome a Zarif candidacy and presidency to distract the public from the reality that he’s in charge regardless of who the president is. Meanwhile, if Zarif is approved by the Guardian Council to run, then it becomes less likely that the reformists will boycott the 2021 elections, as some have been urging them to do. It would take Khamenei full circle and he would still be the master puppeteer pulling the strings. This sort of political charade might just be enough to make the supposed reform leaders feel relevant, even though they lost their flock long ago.

Alex Vatanka is a Senior Fellow at MEI and the Director of the Iran Program. His forthcoming book is “The Battle of the Ayatollahs in Iran: The United States and the Struggle in Tehran to Make Foreign Policy Since 1979” (2020). You can follow him on Twitter @AlexVatanka. The views expressed in this article are his own.