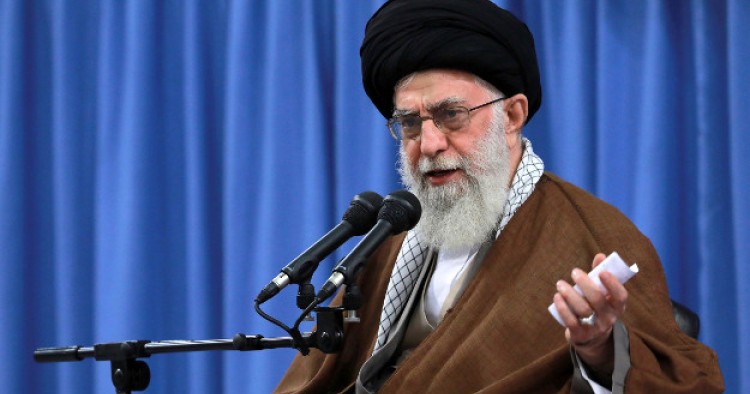 Supreme Leader’s representative to the Islamic Revolution Guards Corps (I.R.G.C.) says Iran’s revolution is a “prelude to internationalization of Islam,” and that the Iranian regime has “foiled all American plots” in the past 38 years. Hojjatoleslam Ali Saeedi, however, cautioned that the revolution is also facing serious domestic and foreign threats – primarily the “arrogant front led by America and secular liberals at home.” He also warned that the United States and its allies have had some success in promoting “Western ideology, liberal democracy model, culture and lifestyle” inside Iran. “The power and might of the Islamic revolution has so far thwarted all plots and evil actions of America. According to their own statements, Iran is considered an influential power in the world, and we see its influence in power dynamics in the region,” he boasted. “On the other hand, the American strategy to provide security for the Zionists [Israelis] has not only failed, but the occupying Zionists, who once pursued the ‘Nile to Euphrates’ strategy, today do not enjoy security even within the occupied territories.”

The Supreme Leader’s aide also claimed that Washington has constantly sought to topple the regime in Iran since the 1979 revolution, and urged the country’s leaders to be vigilant about the enemies’ “infiltration.”

Comment: As the Supreme Leader’s representative to the I.R.G.C., Ali Saeedi’s views carry a lot of weight in Iran. He has been a steadfast advocate of using hard power and soft power tools to expand Iran’s ideological and political influence in the Middle East and around the world. He not only vilifies America and Western culture and democracy, but also questions the legitimacy of neighboring Islamic states and the way Islam is practiced in the region. He has also called for the export of Iranian revolution to the broader region. “We’re responsible to introduce pure Islamic to the world,” he once said. Saeedi is also a strong supporter of Iran’s missile and nuclear programs – calling the country’s nuclear program a “nightmare” for the United States. He was among 17 Iranian officials sanctioned by the European Union in 2012 for their role in serious human rights violations in Iran.

But he is not the only senior Iranian official openly calling for exporting the country's revolution. Last week, the chief commander of the Islamic Revolution Guards Corps (I.R.G.C.) also claimed that Iran’s revolution had now “crossed borders,” was expanding and had defeated the “Arrogance” – a term Iranian leaders use for the United States. “This revolution has now turned into an instrument for the expansion of the Islamic revolution and promotion of the God’s religion around the world,” Major General Mohammad Ali Jafari told a gathering of I.R.G.C. commanders and top clerics on Tuesday. He boasted that Iran’s regional proxies – what he termed as the “resistance front” – are exporting Iran’s revolution across the region. He further explained that the country’s “Islamic revolution is at its third stage, which is the establishment of the Islamic government” around the world. “The main threat to our country is the danger of antirevolutionary vision based on American Islam that exists in the country,” he warned, in an implicit criticism of Iranian politicians and activists who advocate for improving ties with the West.

The remarks by top Iranian leaders indicate that the Islamic Republic remains committed to exporting its revolution abroad 38 years after Ayatollah Khomeini toppled the Shah and established the clerical regime in Tehran. Last November, Major General Yahya Rahim Safavi, a top military advisor to Supreme Leader Ali Khamenei and former I.R.G.C. commander, also claimed that a global Islamic government would soon be established with its axis in Iran.