Kill the Messengers: Yemen's 2009 Clampdown on the Press 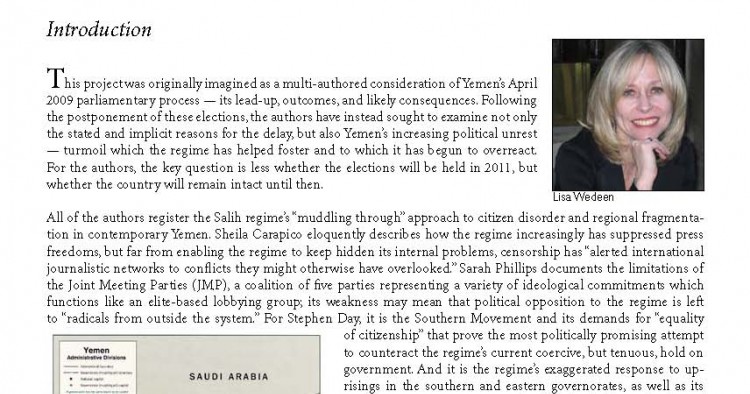 Holding scheduled elections this April or May would have taken great statesmanship by Yemen’s leadership, but could have demonstrated that democratic processes are steadily becoming routine in Yemen. Instead, a clampdown on the independent press signaled growing repression. Unable to defuse the tensions behind intermittent conflict in the far north and low-intensity insurrection in the south, Yemen’s leaders resorted to the suppression of news coverage. However, crude measures to keep military operations out of the news backfired, and focused the attention of Arab and international advocates of press freedom on Yemen’s domestic unrest.

A newly invigorated and varied range of periodicals signified the relative political openness in Yemen following its unification in 1990. The “war of words” between two rival official news establishments was the harbinger of the armed confrontation that broke out in 1994. After unity, in addition to what had been the state-owned media of the People’s Democratic Republic of Yemen (PDRY) and the Yemen Arab Republic (YAR) and their respective ruling party organs, dozens of dailies, weeklies, and occasional newspapers flooded kiosks with an array of viewpoints. Press freedom was relative, not absolute; a press prosecution office that opened in Sana‘a in 1993 prosecuted at least 20 cases for violating the press law’s requirement of “truth,” most of which ended in acquittals. Following the defeat and flight of its former leadership, the old PDRY organs either disappeared entirely or re-emerged under new editorial management and with content. Although the Ministry of Information’s unified national broadcasting corporation and a raft of state and ruling party publications issued the official line, plenty of opposition and private newspapers survived. Press freedom, however, was whittled away by limitations on access to paper and printing facilities, travel restrictions, intimidation, prosecutions (with a few convictions), and occasional police or para-military actions.

Whereas press trials in the 1990s were witnessed mainly inside the courtrooms, in the 2000s, and most dramatically during the crackdown that began in late April 2009, a network of Arab and international press defenders documented and publicized additional violations. In 2006, for instance, there were reports of ill-founded defamation lawsuits by the National Bank for Trade and Investment against al-Diyar, against al-Shoura by the Defense Ministry, and against the independent al-Wasat by the Religious Endowments Ministry and the military police, all for reports related to corruption or similar misdeeds.

The special ban on independent coverage of military affairs was quite effective in remote regions of the far north. A media blackout, backed by a total travel ban, prevented most or all journalists from reaching the parts of Sa‘ada governorate where fighting occurred. One prominent journalist who defiantly reported civilian casualties was pardoned after serving part of a prison sentence for conspiring with the al-Huthi rebellion. In June 2008, the former editor-in-chief of two newspapers affiliated with the al-Haqq party, al-Shoura and al-Umma, became the first journalist tried before a criminal court of security affairs which had formed in 2000. The journalists’ syndicate protested both the site and the verdict. In October 2008, another court upheld the Ministry of Information’s directive suspending the professional accreditation of the chief editors of al-Thawri, a Socialist newspaper, and a new newspaper, al-Shari', for a year. These cases, noted by international watchdogs, had a chilling effect domestically, but did not silence the opposition press entirely.

The media blackout has been less effective recently in the larger, more urban, and more accessible southern provinces, where reporters and editors defied the state in reporting on violence, southern dissatisfaction, and state corruption. This caused the Salih Administration to overreact. In April, the Sana‘a bureau of the Al-Jazeera satellite channel received threats via text message after the station aired footage of southern demonstrators along with commentary about the possible dissolution of Yemeni unity. In early May, coinciding with World Press Freedom Day on May 3, eight independent newspapers — al-Mustaqilla, al-Masdar, al-Watani, al-Diyar, al-Ahali, al-Nida‘, al-Shari’, and al-Ayyam — along with a popular blog and the www.almukallapress.com and al-Taghir news sites were shut down, at least temporarily. The grounds seem to have included both reports on army operations and muckraking about corruption in high places; al-Masdar, for instance, ran a story on April 28 about the President’s son’s handling of investment. Another 70 independent outlets received direct or indirect warnings. Al-Ayyam, a widely circulated Aden daily which launched in the 1950s and whose outspoken editors and offices had been the object of past lawsuits, gunfire, and threats, was a particular target. Copies of the paper were seized and burned, vigilantes attacked its offices, and its editors were criminally charged. The last issue available on the internet in early June, published on May 5, ran the headline “Aden security confiscates over 50,000 copies of al-Ayyam” and photographs of one dead and one of the four injured in an exchange of gunfire in al-Dala‘a followed by news articles containing further details. Government forces also confiscated at least four consecutive daily issues of al-Quds al-Arabi, a Palestinian newspaper published in Europe, for its commentaries on these events in advance of Yemeni Unity Day on May 22.

The state-run broadcast stations, the national daily al-Thawra, and the government and ruling party newspapers, such as 26 September, 14 October, 22 May, Al-Mithaq, and al-Mu’tammar refuted the opposition papers’ coverage indirectly, omitting stories of military operations in favor of counter-images and narratives of south Yemenis celebrating unity, denials that any newspapers had been closed, editorials on the responsibility of the press to national unity, criticisms of Al-Jazeera’s purportedly pro-Socialist, pro-separatist bias, and speeches from the President and his acolytes.

But the government was not prepared to win its case in the court of public opinion. Signaling new resolve to institutionalize press censorship, the Supreme Judicial Council announced that a new Press and Publications Court would try reporters and editors from the eight papers now criminally accused of publishing material “harming national unity.” Journalists gathered peacefully outside the Ministry of Justice and alerted domestic, Arab, and international networks.

As a strategy for keeping news of Yemen’s internal problems from reaching regional and international audiences, punishing the messengers has so far proven counter-productive. Censorship has failed to suppress news of southern Yemen’s grievances; to the contrary, the banal repression of the press has alerted international journalistic networks to conflicts they might otherwise have overlooked. In May 2009, the Arabic Network for Human Rights Information and 37 affiliated human rights and press freedom groups based in Cairo, Bahrain, Damascus, Sana‘a, Ramallah, and elsewhere documented press intimidation and appealed to President ‘Ali ‘Abdullah Salih to respect journalists’ rights. The France-based Reporters without Borders, the US-based Committee to Protect Journalists, the London offices of Article 19, the International Federation of Journalists, and various human rights organizations issued a string of notices expressing alarm and calling on Yemen to meet its obligations, as a signatory to the International Covenant on Civil and Political Rights and the Arab Charter on Human Rights, and to guarantee freedoms of expression and information. Their appeals were furthered by Yemeni journalists and activists who contacted their colleagues in and beyond the Arab region, and in turn called attention to the very events Yemen’s government hoped to keep secret.

Paired with the failure to reach an accommodation with opposition parties to allow elections to go forward, this wave of censorship hardly bodes well for Yemen’s reputation as a country transitioning to democracy. If anything, it seems to put the country on a trajectory towards tyranny.