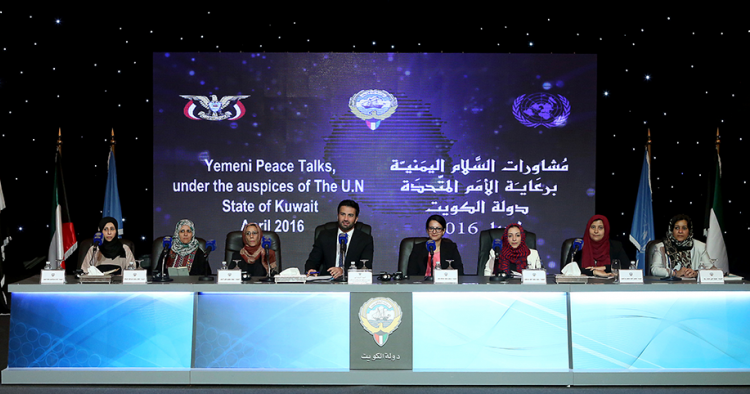 When the Saudi-led coalition launched military operations against the Houthi insurgents on March 26, 2015, all of the Gulf Cooperation Council (GCC) states, except for Oman, joined the multinational force. As has become clear, each of the Arab Gulf sheikdoms has its own national interests and unique history of relations with Yemen and Yemeni factions, and these have shaped their changing perceptions of the war over the past five and a half years. Kuwait’s role in Yemen’s multidimensional conflict is a case in point.

Since 2015 Kuwait’s Yemen foreign policy has evolved. When Riyadh began waging “Operation Decisive Storm,” Kuwait was an original participant in the Arab coalition. At that juncture, Kuwait City and Riyadh were closely aligned, with both believing that GCC members needed to counter Houthi power in Yemen through military means. On March 28, 2015, Sheikh Sabah al-Ahmad al-Jaber al-Sabah, Kuwait’s emir, told the Arab League that the Iranian-sponsored rebels threatened regional security.

At the beginning of the Saudi-led campaign, Kuwait reportedly contributed 15 fighter jets. Given that it did not join the U.S.-led military coalition’s airstrikes against ISIS in Syria in 2014, Kuwait’s involvement in the anti-Houthi campaign spearheaded by Riyadh indicated the extent of Kuwait City’s support for Saudi goals in Yemen.

According to Tyler B. Parker, a doctoral student researcher at Boston College, Kuwait had two main reasons for joining the Arab coalition in 2015. First, the Kuwaiti leadership was determined to reaffirm its allegiance to Saudi Arabia. Second, Kuwait was demonstrating its “strong commitment to the norm of sovereignty in international relations” after President Abed Rabbo Mansour Hadi’s invocation of Article 51 of the UN Charter “added necessary legitimacy to the intervention on the part of Kuwait,” said Parker. “Unlike the material threat that the Houthis posed to Saudi Arabia, and the ideological threat that they posed to the United Arab Emirates (UAE), Kuwait was not acting in response to (in)direct Houthi danger. Its motives seemed more political and normative, and related to the institutions of the GCC and the UN.”

In Kuwait and other Arab Gulf monarchies, the common view was that the Houthi takeover of Sana‘a represented a dangerous assertion of Iranian influence in the Arabian Peninsula that needed to be countered. Amnah Husain Ibraheem, a researcher of Gulf politics at the University of Tennessee, wrote that Kuwait joined the coalition in 2015 “due to fears of Iranian interference expanding throughout the Arab Gulf states” as well as the Houthis “potentially disrupting oil export routes.”

Nonetheless, as the war dragged on without the Saudis achieving their objectives in Yemen, Kuwait’s role in the conflict became more diplomatic and less militaristic. Rather than focusing on helping the Saudis secure a military victory, the prospects for which have dimmed considerably over the years, Kuwait instead chose, as Dr. Kristian Coates Ulrichsen put it, to serve as a force for “de-escalation, dialogue, trust-building, and diplomacy” in Yemen.

A major sign of this shift came in 2016 when the Kuwaiti government, with UN support, hosted inclusive talks for resolving the Yemeni crisis with the participation of Houthi representatives. For more than three months that year, talks went on as Kuwaiti officials attempted to mediate a just and lasting resolution to the Yemeni crisis. Although the effort ultimately proved futile, it underscored Kuwait’s commitment to bridging the gaps between the various actors in Yemen’s war. So too did Kuwait’s focus on the conflict while serving as a non-permanent member of the UN Security Council (2018-19).

Historically, Kuwait’s diplomatic involvement in Yemen dates back to the 1967-90 period, when Yemen was split into two separate countries. Kuwait mediated between the Yemen Arab Republic (YAR, or North Yemen) and the Marxist People's Democratic Republic of Yemen (PDRY, or South Yemen) during the Yemenite Wars of 1972 and 1979.

During Oman’s Dhofar War (1965-76), the PDRY — along with China, Libya, North Korea, the Soviet Union, and other revolutionary governments — supported the rebels in Dhofar, who were fighting to establish a second Marxist regime in the Arabian Peninsula, which pitted South Yemen against the Sultanate of Oman before tensions eased in the 1980s after the conflict ended. In 1982, Kuwait and the UAE mediated an agreement between the PDRY and Oman, which led to Aden and Muscat exchanging ambassadors; South Yemen suspending Aden Radio’s broadcast of “Voice of Oman Revolution”; and the PDRY pressuring the Popular Front for the Liberation of Oman into ending its hostility to Sultan Qaboos’s government.

In Yemen’s current crisis, Kuwaiti officials have stressed that the solution to the conflict can only come through a political process, not military means. According to Ibraheem, the “diplomatic avenue remains Kuwait’s priority when addressing regional challenges … and the State [of Kuwait] has not aspired to spend financially on building the military the way its neighbors have — Saudi Arabia, Qatar, UAE.” That said, Kuwait remains, at least nominally, a part of the Saudi-led military campaign, albeit with an extremely limited role. In January, TaizonLine reported that Kuwait’s participation in coalition airstrikes is minor and Kuwaiti ground forces are stationed along Saudi Arabia’s border with the UAE.

Since 2015, Kuwait’s Yemen foreign policy has moved into far greater alignment with Oman’s. Similar to Muscat, Kuwait City has come to strike a “careful balancing act” vis-à-vis Yemen as Dr. Dania Thafer, director of the Gulf International Forum, explained. “[The Kuwaiti] role can be seen as managing antagonistic Iran without challenging maximalist Saudi Arabia or the UAE,” she added.

Yet Kuwait and Oman have unique approaches to Yemen. While Kuwaiti “mediation efforts are generally overt,” the Omanis have embraced “covert and discrete facilitation of talks between the Houthi movement and Saudi Arabia,” without there being any appearance of an explicit division of labor between Kuwait City and Muscat on the Yemen dossier, according to Parker. Instead, he added, Kuwait and Oman are “implicitly playing their long-held diplomatic roles.”

Ultimately, of all the Arab League members, Kuwait and Oman are in the strongest positions to facilitate lasting peace in Yemen. In general, most parties in Yemen view Kuwait as a trustworthy mediator, even though the country initially joined the Saudi-led coalition and remains, at least officially, a member of it.

Nonetheless, it will be not be easy for Kuwaiti diplomats to overcome the major obstacles that thwarted the country’s mediation efforts from succeeding in 2016. The lack of trust between Yemen’s warring parties dims the prospects for a political solution, which would inevitably require the various actors to possess a degree of confidence that their adversaries will be willing to abide by the terms of a negotiated settlement. Despite such challenges, it is a testament to the diplomatic culture of Kuwait’s leadership that the al-Sabah royals continue attempting to bridge the gulf between Yemen’s different factions in order to wind down a conflict that has produced one of the world’s worst humanitarian disasters.

Looking ahead, it is important to keep in mind 91-year-old Sheikh Sabah’s health and consider how a new head of state could either continue with Kuwait’s current Yemen foreign policy or conduct it differently. Given that the succession in Kuwait may be less smooth than the transfer of power in Oman earlier this year, there are certain unknown variables in the equation. It remains to be seen whether the next Kuwaiti emir will keep the country’s military forces nominally involved in the coalition and its diplomats working on negotiations with the Hadi government, Saudi officials, and Houthi representatives.

Giorgio Cafiero is the CEO and founder of Gulf State Analytics, a geopolitical risk consultancy based in Washington, DC. His research interests include geopolitical and security trends in the Arabian Peninsula and the broader Middle East. The views expressed in this piece are his own.