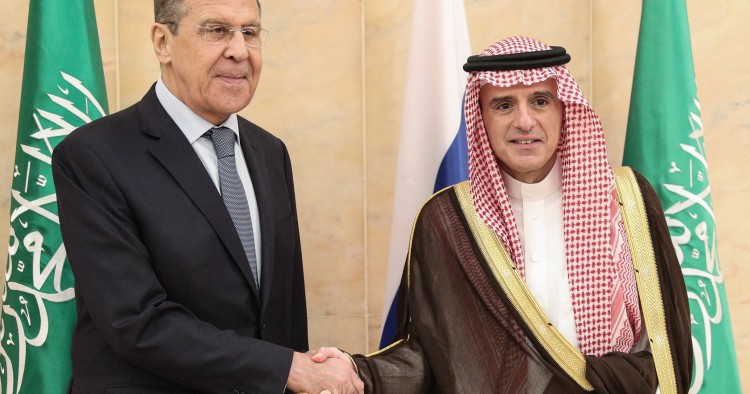 Russian Foreign Minister Sergei Lavrov made a four-day trip to the Gulf in early March, stopping in Qatar, Saudi Arabia, Kuwait, and the United Arab Emirates (UAE) as part of a broader effort to boost Moscow’s ties with the region. Although the Gulf monarchies are traditionally considered of some of the U.S’s closest allies, relations between Russia and the Gulf have improved in recent years and there is potential for further cooperation going forward.

Russia’s interests in the Gulf are multifaceted, but key areas include energy, military affairs (especially arms sales), and investment, as well as regional conflicts, most prominently Syria. During his official meetings Foreign Minister Lavrov focused on economic cooperation, in particular Gulf investment in Russia, and negotiations over further coordination on Syria. Russian-Gulf commercial ties are especially relevant at the moment as Moscow is set to host several events next month, including the fifth ministerial session of the Russian-Arab Cooperation Forum, Arabia-EXPO 2019, and a meeting of the Russian-Arab Business Council. Part of Lavrov’s mission was to invite the Gulf countries to attend, and he no doubt made a major effort to persuade them to send high-level delegations. As yet, however, the Gulf monarchies have not showed a willingness to take part.

Moscow appreciates the importance of emphasizing economic cooperation with the Gulf countries, as it understands that its political influence in the region pales against that of Western powers like the U.S and the U.K. That said, Moscow has taken on an increasingly active role in Middle Eastern affairs in recent years, gaining the recognition of regional countries following its successful military campaign in Syria, and Russia is now seeking to build on this to further position itself as a major player in the region.

Lavrov’s agenda for his Gulf tour was not limited to just economic matters, however; he had a number of other important tasks as well, such as enhancing defense cooperation and laying the groundwork for a potential visit by Russian President Vladimir Putin to the region. Also on Lavrov’s to-do list were discussions about the ongoing conflicts in Syria, Yemen, and Palestine, as well as the intra-Gulf Qatar crisis. On Syria, Russia has been pushing for a public announcement of support for its readmittance to the Arab League after eight years of suspension, but sentiment in the Gulf remains mixed. Qatari officials told Lavrov that the country is not ready to normalize relations with Syria, while the reaction of the Saudis and Kuwaitis was more muted. President Bashar al-Assad’s recent visit to Iran to cement Syrian-Iranian bilateral relations did little to help in this regard, adding fuel to the fire and further complicating Lavrov’s already-tricky negotiations. The Gulf monarchies have been deeply involved in the Syrian crisis and have considerable financial resources that could be helpful during post-war reconstruction, so securing their support will be critical. On the intra-Gulf dispute over Qatar, Russia strives to maintain positive relations with both sides. Russia’s ambassador to Qatar, Nurmahmad Kholov, stated that “The Russian position regarding the Qatar crisis is clear. Moscow calls on regional countries led by Saudi Arabia to find a compromise way and avoid direct confrontations between one another.”

Indeed, Qatar and Saudi Arabia are both central to Russia’s Gulf agenda due to their economic and geopolitical importance. Russia-Saudi relations have improved significantly in recent years. The thaw began in 2015, as a result of geopolitical factors like the Iran nuclear deal, Western sanctions on Russia, the war in Yemen, and Moscow’s military deployment in Syria. Both states acknowledged each other’s importance in the region and decided to focus on areas where they could find common ground, culminating in King Salman’s official visit to Russia in October 2017. Bilateral cooperation on energy has been a particular focus: $3 billion in contracts were signed during the king’s 2017 visit and the two sides have worked together closely to stabilize oil prices through the OPEC+ arrangement.

In the case of Qatar, the country seeks to expand and diversify its ties in light of the ongoing dispute with its Gulf neighbors that began in June 2017. Its growing relationship with Russia, most notably in defense, may create an additional counterbalance against the Saudi-led “Anti-Terror Quartet” aligned against it. In 2017, Qatar signed a technical cooperation agreement with Russia, covering air defense and military supplies. Speaking during a joint news conference with Minister Lavrov on March 4, Qatari Foreign Minister Sheikh Mohammed bin Abdulrahman al-Thani said, “There is a discussion for procurement of various Russian equipment” — specifically Russia’s S-400 missile system — though no decision has yet been made. Russia has been actively promoting its S-400 surface-to-air missile defense system in the Middle East in recent years, garnering interest from both Saudi Arabia and Turkey, among others. Talks with Qatar have reportedly been hampered by Saudi concerns that Qatar might deploy the missile system against the kingdom. Evidently, Russia would prefer not to explicitly support Qatar in the Gulf diplomatic row to avoid harming its relations with other countries in the region, like the UAE, Egypt, and Saudi Arabia.

Moscow’s influence in the Gulf remains limited not only by the U.S’s preeminence in regional political and military affairs, but also because of a lack of trust. Russia’s close engagement with Iran is the main obstacle to its deeper involvement in the Gulf. Put simply, Russia tries hard to persuade the Gulf monarchies that its close cooperation with Iran does not constitute a threat to their national security but rather could help to facilitate the resolution of regional conflicts. This argument doesn’t appear to have much traction with the Gulf states, however, and it seems doubtful that Russia will be able to change their perception of Iran and its role in the region’s conflicts.

In the light of recent developments like the reopening of the Emirati and Bahraini embassies in Syria, Iran’s deepening engagement with the region, and Moscow’s growing influence in Middle Eastern affairs, the Gulf monarchies may well benefit from improved relations with the Kremlin, as coordination with both Russia and the West can only help as they work toward a realistic plan for the resolution of regional conflicts.

Fuad Shahbazov is a Baku-based analyst, covering regional security and defense policy issues. The views expressed in this article are his own.