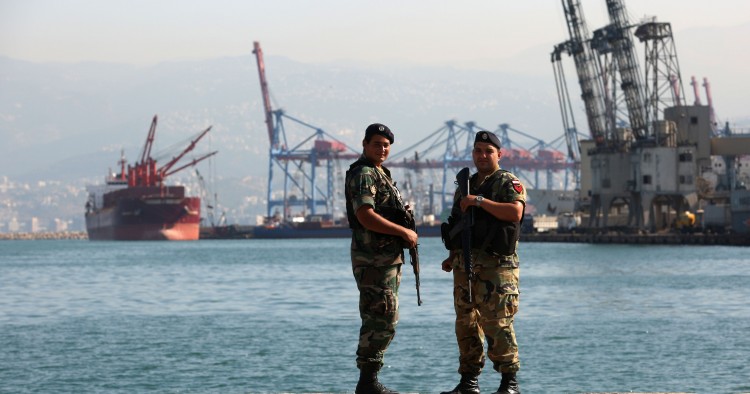 Lebanon has a coastline of 120 nautical miles (NM) along the eastern Mediterranean and an exclusive economic zone (EEZ) that encompasses an area of 5000 square nautical miles (SNM). While this wide expanse presents many opportunities, it also represents a pressing security challenge for the Lebanese Navy and the region in general.

Outside the region, many world powers are also invested in defending the country’s coast.  The U.S. holds several vital interests in this domain, such as countering terrorism and other malign actions, stopping the proliferation of weapons of mass destruction (WMDs), and ensuring freedom of navigation and commerce through critical international waterways. With ongoing conflicts in the region and the Syrian civil war next door, Lebanon is compelled to more effectively manage threats to the nation, which would benefit the region and the globe as well.

Maritime threats to Lebanon fall into five broad areas: terrorism; pollution; illicit trafficking of drugs; smuggling of weapons and explosives; illegal immigration and human trafficking. Combatting such a wide range of hazards requires a robust navy and, sometimes, regional coordination and information sharing as well as assistance from abroad.

UNIFIL-MTF — A task force for good, but not for ever

Ill-equipped and underfunded, the Lebanese Navy is overburdened. Thus, it cannot mitigate threats on its own. For this reason, the United Nations Interim Forces in Lebanon - Maritime Task Force (UNIFIL-MTF) was formed in 2006 to assist the Lebanese Navy in implementing the United Nations Security Council Resolution (UNSCR) 1701. This resolution was adopted by the UN Security Council to end the 2006 war between Israel and Hezbollah and to prevent the entry of arms or related material into Lebanon without the country’s consent.

UNIFIL-MTF established a naval presence in a maritime area of operations that includes Lebanese territorial waters. The Task Force is charged with maritime interdiction operations (MIO) involving the surveillance, identification, and detainment of suspect vessels which are referred to Lebanese authorities for boarding and inspection when deemed appropriate. By January 2020, the MTF had hailed 100,000 ships and referred 14,400 to the Lebanese Navy for further inspection. No arms or related material have been found at sea to date.

The MTF helps Lebanon to protect its seaways and territorial waters in other ways as well. For example, it has provided training for Lebanese naval forces and assisted in search and rescue missions. A remarkable instance of the latter was the MTF’s efforts following the crash of Ethiopian Airlines Flight 409 in 2010, when it helped to recover the bodies of victims off the shores of Beirut.

The MTF’s presence, like that of UNIFIL in south Lebanon, also plays an important role in peacekeeping between Lebanon and Israel, providing international oversight in a troubled part of the Mediterranean.

The long-term objective of the task force is to fully transfer its security responsibilities to the Lebanese Navy. The 2018 UNSCR 2433 called on the Lebanese government to increase its naval capabilities in preparation for a gradual assumption of MTF’s current responsibilities. Any sustainable Lebanese maritime strategy will have to accommodate the fact that the MTF is a time-limited presence – and a financially burdensome commitment for the UN. As such, it is critical to enhance the assets and capabilities of the Lebanese Navy so that it will be able to fill the vacuum left by the eventual departure of the MTF.

Extracting benefits from oil and gas

Major gas finds in the eastern Mediterranean are reshaping the regional maritime security and energy map, which in turn reshapes the strategies and preferences of states and other actors. The eastern Mediterranean basin, which includes Lebanon’s EEZ, is estimated to hold some 34.5 trillion cubic meters of gas and 1.9 billion barrels of recoverable oil. This could significantly improve Lebanon’s already struggling economy if the reserves are proven and the extraction is handled properly.

A consortium made up of Total (France), ENI (Italy), and Novatek (Russia) has already begun exploratory drilling off the coast of northern Lebanon in Block 4, one of Lebanon’s 10 oil and gas concession blocks. Additionally, the same consortium is planning to drill in Block 9, part of which falls inside the 854-square-kilometer zone where the maritime boundary claims of Lebanon and Israel overlap.

The prospect of exploration close to the border area has raised tensions.  As a result, exploration on both sides of the disputed border has been on hold since 2010. With regional relations already fraught, many observers fear escalation over conflicting claims in the Mediterranean.

At the same time, the shared desire for a stable and secure maritime environment conducive to gas and oil exploration may create important incentives for compromise. Mediation, if successful, would mitigate security challenges, as all parties would then have a stake in minimizing the risks in order to maximize the gains.

Such an agreement may emerge out of recently initiated talks. Since October 14, 2020, Lebanon and Israel have been engaged in U.S.-mediated negotiations to resolve conflicting claims and reach a compromise on a common maritime border.

An environment that is conducive to oil and gas exploration and extraction in the eastern Mediterranean requires agreements on cooperation and coordination between Lebanon and the countries with which it shares maritime borders: Israel to the south, Syria to the north, and Cyprus to the west. Such an environment must also be secure. There is already widespread international support for counter-terrorism efforts. Domestic, regional, and international agencies must join forces to maintain this high level of support while also extending it to other areas related to maritime security.

A safe and secure environment cannot be fostered unless the Lebanese Navy acquires the requisite capabilities to protect maritime borders and assume effective security control over national waters. These objectives are becoming harder to achieve with the current severe and protracted economic crisis that has starved the Lebanese Navy of the necessary financial resources.

As part of this strategy, the Lebanese Navy must secure and control the country’s EEZ. This can be achieved through a combination of actions: an adequate deployment at sea and ashore for real-time maritime surveillance, data collection and quick response (all three being part of "Maritime Situational Awareness" or MAS); strong systems of Command, Control, and Communication (C3); effective national and regional interagency coordination and information sharing; and interception assets for maritime interdiction operations.

Lebanon can mitigate challenges and seize opportunities by developing its naval capacities. Looking more globally, other powers also have a vested interest in Lebanon having a more robust maritime strategy. Policies proposed here would certainly work towards achieving U.S. maritime objectives of securing sea lines of communication and regional peace. Lebanon, the U.S., and the world all have much to gain from a more stronger and more effective Lebanese navy.

Rear Admiral (ret.) Joseph Sarkis retired from the LAF after a 37-year career, during which he held a variety of command and staff positions, including most recently, deputy chief of staff for planning from August 2017 to December 2019. He is a Non-Resident Scholar with MEI's Defense and Security Program. The views expressed in this piece are his own.