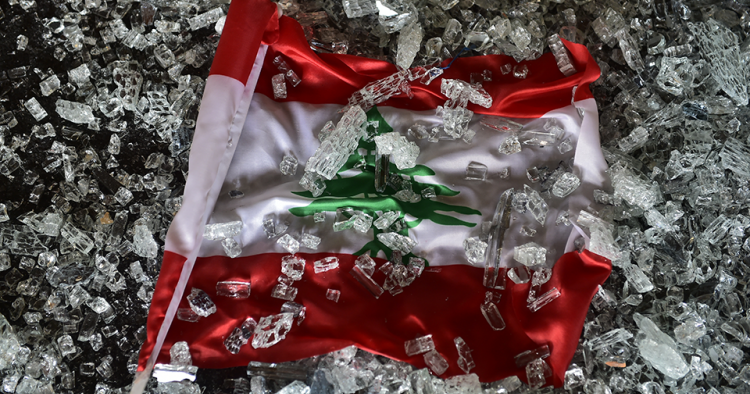 Lebanon and its citizens have endured many hardships in recent years. The past 12 months alone have witnessed cumulative pain from multiple directions — economic collapse, political stalemate, the Beirut port explosion, an ongoing citizen rebellion against the ruling elite, and the stubborn impact of the COVID-19 pandemic. Two dimensions of Lebanon’s condition today are especially striking, however, and augur more difficult times ahead. First, Lebanon has become just another pauperized and increasingly militarized Arab country whose citizens rebel against state authorities. Simultaneously, the regional and international powers that once engaged in it for their own purposes seem less interested in saving it from its self-inflicted decline.

The most striking consequence of these dynamics is that Lebanon has lost its once distinct status as a society that stood apart from other Arab countries that were mostly centralized autocracies. Ever since its birth a century ago, Lebanon had been the region’s leader in endeavors that required the full use of the human mind and cultural spirit — press, education, research, banking, theater, publishing, advertising, cinema, art, and other activities. These flourished because the country’s cultural and religious pluralism allowed what no other Arab country provided: enough space for the individual Lebanese to develop his or her full talents, in a free and dynamic public sphere that accommodated a variety of views, and that was the envy of all other people in the region.

That legacy weakened slowly in recent years and collapsed during the last year, bringing Lebanon to the point today where it shares many similarities with two main groups of Arab countries. One is the war-torn economic shells of their former selves (like Libya, Iraq, Yemen, or Syria), and the other is the tightly controlled authoritarian security states where individuals fear to publicly or privately express views that contradict the official line (like Egypt, Bahrain, Saudi Arabia, and the UAE). Lebanon now joins the hapless club of two-thirds of the Arab countries where major popular uprisings have challenged or even removed former tyrants from office since 2010.

In fact, Lebanese citizens’ views today mirror almost exactly those of other Arabs in Iraq, Algeria, and Sudan who continue to rise up in protest against their incompetent governments. Millions of citizens across the Arab World took to the streets to reform their governing systems, supported by a clear majority of the population. The 2019-20 annual regional poll by the Doha-based Arab Center for Research and Policy Studies, the Arab Opinion Index, shows that an average of 70-80% of all citizens in Lebanon, Iraq, Sudan, and Algeria support their ongoing, but momentarily pandemic-muted, uprisings to uproot current government leaders and systems. This wide support, however, does not seem to materialize in practice — only about 20% of citizens have actually participated in street demonstrations.

Socio-economically, the poll also shows that nearly three-fourths of all families in Lebanon and these countries do not have sufficient resources to cover their basic needs like food, shelter, health care, and education. Nearly one-fourth of all citizens want to emigrate, half or more view their government’s performance negatively, and over 90% see corruption as widespread in their society. In these four volatile nations as well as in the other polled countries, citizens see the main motivations of the uprisings as ending oppression and corruption, and improving poor living conditions and public services. While Lebanon has long been a formal member of the League of Arab States, it is now fully in the fraternity of distressed Arab countries whose desperate citizens and security-minded governments face off against each other.

A century of build-up

The October 2019 “revolutionary uprising” was a high-water mark in the country’s continuing implosion and collapse which had been building up for decades. Despite the overlapping economic disruptions, COVID-19 pandemic, and port explosion, the protest movement remains more of a symptom rather than the cause of the cumulative, decades-long rot that has plunged a majority of Lebanese into poverty, vulnerability, marginalization, and desperation.

Like the many other stressed or war-torn Arab countries, Lebanon’s decline must be understood in its four concentric spheres of modern history, which vary by country, but all follow a similar pattern.

The 1920s period was the first and original line of state configuration and policy that ultimately brought many Arab states to their current disheveled condition. Back then, most of the modern Arab states were created by a combination of European colonial powers and local elites — totally without the input of their citizens on the shape, nature, values, or policies of their new countries. The second era that presaged today’s troubles in Lebanon and most Arab states was 1975-85, when the combination of massive new oil income and military officers who took control of governments in Iraq, Syria, Yemen, Sudan, Libya, Somalia, Tunisia, and elsewhere ushered the region into a new era of centralized autocracy and authoritarianism. By the 1990s, this had morphed into socio-economic stagnation in terms of real quality of life among an increasingly pauperized citizenry that enjoyed no political rights to redress their pain. The third historical sphere is the period since 2005 when the Syrian government withdrew its troops and officials that effectively had run Lebanon for 30 years. Left on their own, Lebanese politicians and former warlords-turned-sectarian political leaders then chronically squabbled among themselves. In parallel, they collectively monopolized the public sector and enriched themselves and their followers while most public services steadily deteriorated. The final and most recent sphere is the last 18 months of disruptions from citizen uprisings that brought serious governance to a halt. This coincided with a period of economic fraying and a collapse of the value of the national currency due to unsustainable fiscal and monetary policies.

Lebanon is noteworthy for having long resisted the dilapidated economies and authoritarian political systems that defined so many other countries in the region in the past half a century or so. Today, however, the recurring incidents of a poverty-stricken citizenry protesting in the streets for its rights and a dignified life are increasingly met by a more militarized state that does not hesitate to use its arms and tear gas against its own citizens. Also troubling for Lebanon is the steadily rising pace of state courts, ministries, or security agencies that detain, arrest, and indict individuals for actions such as social media posts that had long been a hallmark of Lebanon’s robust free speech legacy. These two negative trends combine with the third and perhaps the most devastating one that seems to be a foundation of the country’s current ills — a government whose executive, parliamentary, and judicial branches do not seem to care enough about the suffering of the majority of impoverished citizens to take serious reform actions that would unlock billions of dollars of badly needed assistance.

The bottom line in Lebanon seems to draw a sad picture of a state that gave up on and neglected its citizenry in recent decades. In return, the citizenry is responding by actively seeking protest methods that would throw out the entire ruling elite and create a more participatory and accountable governance system based on the rule of law and social justice. Yet protesters and state authorities are deadlocked, and neither seems able to stifle the other. This is precisely the same situation that pertains in Sudan, Egypt, Libya, Yemen, Iraq, Syria, Algeria, Palestine, Somalia, and other troubled Arab countries that seem to be failing the last century’s triple tests of statehood, sovereignty, and citizenship.

The big difference between Lebanon and other Arab countries though is the presence of Hezbollah, the powerhouse group that will never allow the country to fully collapse. Yet its policies will never be fully accepted by a majority of Lebanese, due to the group’s militarism, decision-making outside the state system, and close ties with Iran and Syria. As the state institutions and political elite continue to deteriorate and lose influence, foreign powers like Saudi Arabia, France, and the United States also seem less interested in stepping in to safeguard Lebanon as they have done for a century. This is due to their more pressing strategic priorities elsewhere in Iran, Iraq, Syria, Libya, and the Horn of Africa, as well as the intractability of the Lebanese ruling elite in paying attention to anything other than their own self-interest, even if it means the slow corrosion of their country’s integrity.

This leaves Lebanon with two principal political actors: Hezbollah and the very incoherent but persistent protest movement that enjoys wide popular support. A key dynamic to watch in the coming months and years is how these two forces engage with each other and with their patrons and supporters abroad, and whether they can act in time to force the floundering governing elite to behave like adults and repair the society and economy they have almost destroyed.

Rami G. Khouri is Director of Global Engagement and an adjunct professor of journalism at the American University of Beirut, a nonresident Senior Fellow at the Harvard Kennedy School, and an executive board member of the Boston Consortium for Arab Region Studies. He tweets @ramikhouri. The views expressed in this piece are his own.