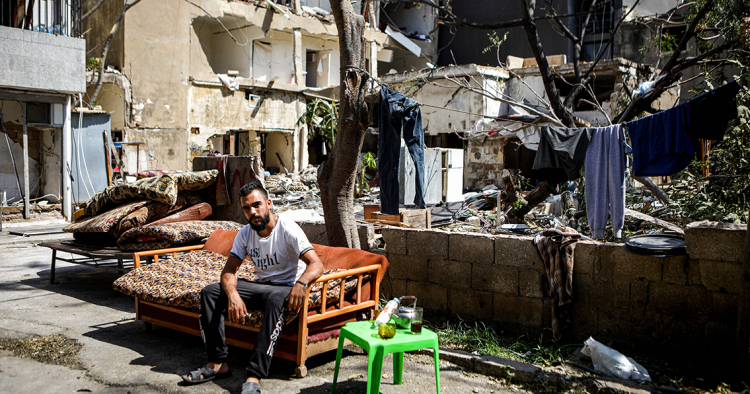 The catastrophic explosion in Beirut on Aug. 4 left 200 dead and thousands more injured. This included at least 43 Syrian and Palestinian refugees and dozens of foreign migrant workers that were killed or injured. In addition, countless homes, businesses, and key infrastructure were damaged or destroyed that will take time to rebuild. The Beirut port explosion will place a great burden on Lebanese society and it will have short- and long-term impacts on marginalized communities.

The port explosion coincided with an economic and political crisis that was exacerbated by the COVID-19 pandemic. Lebanon’s political impasse continued with the resignation of Prime Minister Hassan Diab’s government on Aug. 10. The ongoing political conflict between Lebanon’s ruling political factions coupled with the endemic corruption has directly affected refugees, displaced persons, and marginalized communities. Refugees currently comprise around 20 percent of Lebanon’s population, and they were in distress even before the explosion. With Lebanon’s main port destroyed, the World Food Program (WFP) has warned of a cutoff in basic food supplies. Already among the most vulnerable populations in Lebanon, Palestinian and Syrian refugees will now face increased food insecurity.

Meanwhile, there are at least 850,000 Syrian refugees registered with the UN High Commissioner for Refugees (UNHCR) and roughly 18,500 refugees from Iraq, Sudan, and other countries. According to a 2019 joint assessment conducted by UNHCR, the UN Children's Fund (UNICEF), and the WFP, 73 percent of Syrian refugee households live below the poverty line — less that $3.84 per day — and 55 percent live in extreme poverty. UNHCR provides monthly cash assistance of $175 per month to 33,000 Syrian refugee households in Lebanon. During the winter this is augmented by additional support for 165,000 families. The WFP also provides cash assistance of $27 per individual.

A difficult situation made worse by COVID

Last month, UNHCR reported the results of a survey conducted among Syrian refugees to determine the impact of COVID-19. Of those interviewed, 26 percent were unable to purchase medication by week 12 of the crisis, 61 percent lost employment, 74 percent were unable to pay rent, and 77 percent had difficulty buying food. In addition, due to Lebanon's financial crisis, the Lebanese lira no longer has a stable conversion rate with the U.S. dollar. This has contributed to a sharp increase in the cost of food and other items and placed an even greater burden on refugee families in the country.

Even before the pandemic and the explosion, Lebanon expanded legal restrictions on the right of Palestinian and Syrian refugees to work. Last summer, the Ministry of Labor implemented new prohibitions on small businesses and shops that frequently employ foreign workers without a work permit. This was compounded by the COVID-19 lockdown. Many refugees are employed as day laborers and have not been able to work due to the enforced quarantine and restrictions.

An acute need for funding and access to health care

According to Claudio Cordone, the director of UNRWA in Lebanon, the destruction of Beirut port in the Aug. 4 blast will have further negative repercussions for Palestinian refugees. Even before the explosion, UNRWA had expanded the number of families receiving emergency assistance due to the pandemic, and it plans to extend this support through the end of the year. The agency announced that it will need $10.6 million to provide the necessary support, although that was before the port explosion and additional funding will likely be required as a result.

Yet UNRWA is already stretched to the limit. In August 2018, Washington halted its support to the agency, cutting $360 million in annual funding, or roughly one-quarter of UNRWA’s $1.4 billion budget.As a result of the financial crisis, UNRWA implemented a series of cuts in its services.

Like UNRWA, UNHCR has struggled to provide adequate health care services to Syrian refugees, a situation that has been exacerbated by the COVD-19 pandemic. Last month, UNHCR reported 125 COVID-19 cases among Syrian refugees in Lebanon. Although refugees are prohibited from accessing care at Lebanon’s government hospitals, an initial agreement was reached between UNRWA and UNHCR with Beirut’s Rafik Hariri University Hospital to treat COVID-19 cases among refugees and displaced persons. UNHCR recently announced that six hospitals are now available to treat such cases. However, the port explosion has placed a heavy burden on Lebanon’s fragile health care system as three hospitals were damaged or destroyed. In addition, Rafik Hariri University Hospital was already at maximum capacity and additional facilities may be needed as the number of COVID cases rises among refugees and the broader population.

The combination of the political and financial crises with COVID-19 has had direct repercussions on refugee women and girls in Lebanon. This is not just limited to the risks of contracting the virus in overcrowded and poor conditions. They have also experienced greater levels of domestic and institutional violence. Due to the lockdown, governmental and non-governmental services were not available to assist women and girls living in desperate and violent conditions. These conditions will only deteriorate further as Lebanon struggles to rebuild.

International aid must reach the most vulnerable

After the port explosion, the international community rushed to assist Lebanon. Led by French President Emmanuel Macron and in coordination with the UN, an online donor conference was held to gather emergency support. The $300 million initially pledged to help Lebanon and the subsequent appeal by the UN for $565 million will only provide temporary relief as the estimated damage could exceed $15 billion. It is essential that the international donor community not ignore marginalized and unprotected groups in Lebanon.

The Lebanese government and political parties have a long history of securing the spoils of international aid and distributing it to their supporters, while withholding assistance from the poorest and most vulnerable. Although civil society groups have been discussed as a better alternative to the corruption and incompetence of the Lebanese government, this may not necessarily be the case. Indeed, some civil society organizations mirror the policies and programs of existing political parties and groups. Therefore, it is vital that donors ensure that promised aid reaches refugees, migrants, and internally displaced persons.

The best way to achieve this is to fully fund UNRWA and UNHCR programs and services in Lebanon. These agencies and their UN counterparts, like UNICEF, have the longest track record of successfully providing services to large refugee populations. They also have greater transparency and oversight than their Lebanese government counterparts. In addition, a mechanism already exists to deliver assistance to Syrian refugees in the country through a consortium of agencies that has been subjected to evaluation and assessment. Yet more oversight may be needed and the UN Inspector General’s Office should be empowered and fully funded. Although this will not eliminate corruption completely, it will be a significant improvement over the current situation or the alternative of direct government involvement. Therefore, this is an opportunity to strengthen UN agencies already operating in Lebanon. Otherwise, marginalized groups will be invisible and they will not receive the support they so desperately need.

Dalal Yassine is the Executive Director of Middle East Voices, a lawyer and advocate for gender and human rights for Palestinian refugees in Lebanon, and a Non-resident Scholar at MEI. The views expressed in this piece are her own.