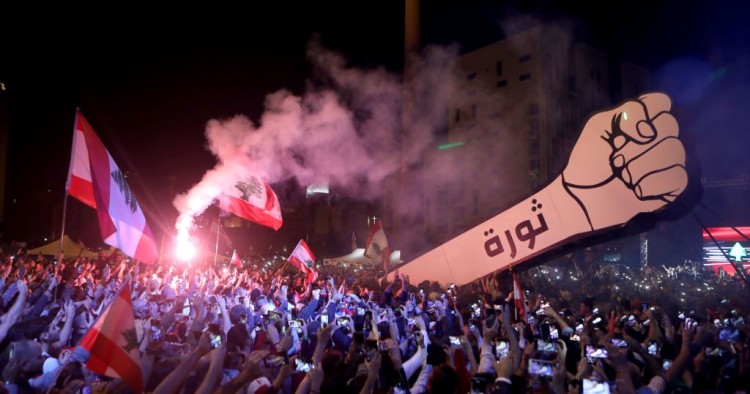 The nationwide protests are the most significant domestic political development in Lebanon since the end of the civil war. It would be useful to examine both the short and long term political potential of this new awakening.

In the short term, the protests have already mobilized the power of the public to bring down a corrupt and ineffective government, and to gain great leverage on the rejection or acceptance of any new government. They have also raised urgent national demands and forced the ruling class to confront these demands.

In the longer term, the uprising has had the effect of a social revolution. It has generated a new national consciousness and will, and is forging a generation of citizens in a spirit of national unity, civic awareness, and public empowerment. In that sense, it is similar in some ways to the 1960s when a new generation, both in Lebanon and in the West, led a movement of social and cultural change that rejected the previous decades’ values and standing order, and proposed a new way forward.

Regardless of the fall or rise of particular governments in the next months, what is happening is already changing the civic identity and values of a whole generation. Indeed, a new Lebanon is being born.

This also indicates that there are two tracks to maintain awareness of: The socio-cultural one where profound long term change is happening among citizens regardless of the government; and the strictly-speaking political track in which governments rise and fall, political leaders are elected or selected to office, and policy is made.

The two tracks are connected but also separate. The revolution in civic identity and values is already under way, and there is little the ruling class can do to stop or reverse it; and it is the most important and lasting change, which will impact Lebanon for decades to come. It needs to be sustained and amplified through continued social action, civic networking, artistic production, and sustained public engagement.

The political track is, in the short term, more stubborn. The 2019 revolution has not yet produced an alternative political leadership to take over from the old; and some in the movement say that it should remain—for the near term—a public protest and revolutionary movement and not venture into selecting and producing representatives or alternative leaders. Indeed, the old (and I mean old-fashioned, not old in age) ruling class might persist for many years, even as society is fast-changing underneath it, unless there is a clear strategy to leverage a considerable portion of this national awakening into lasting and impactful political change. The struggle for power between the old ruling class and the rising movement is going to be long and bitter. It will be measured in years, not months. No one gives up power easily, or willingly.

Read full article on the Lebanese Center for Policy Studies