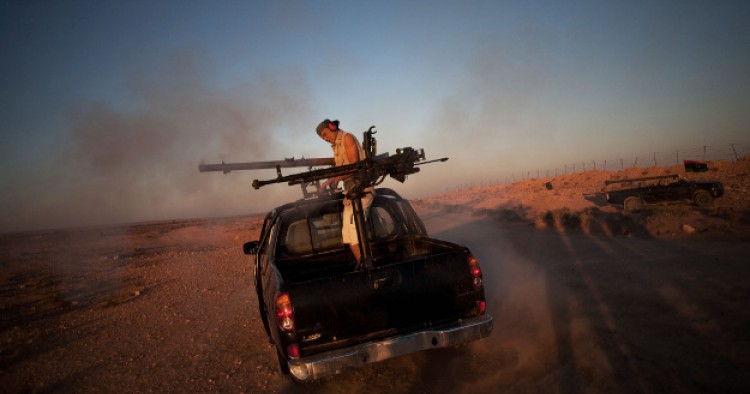 Libya remains broken and violent. Secular forces made gains against Muslim extremists in Benghazi recently, but the advantage has shifted from side to side since early this year. And two rival governments vying for power amidst a near lawless country with open borders is an ideal setting for the outflow of everything from heightened concerns to munitions and fighters. Yet Libya keeps boiling away on the global back burner.

The governmental face-off and continuing disarray in Libya may generate another wave of militant-fed violence that would further unsettle the region. Egyptian President Sisi has embarked on a new binge of security measures after 30 Egyptian soldiers died in a bomb attack on Oct. 24 in Sinai (the worst to date). The likely culprit, Sinai-based al-Qaeda-linked Ansar Beit al-Maqdis, receives munitions from Libyan extremists in Benghazi. Cairo has been unable to block this smuggling. Sisi’s Oct. 8 meeting with Thinni and Egypt’s involvement in air strikes on Benghazi in support of Haftar clearly relate to the threat Libya’s unsubdued extremists pose to Egyptian authorities.

There is meanwhile mounting concern again over the movement of Libyan munitions and militants into the Sahel. Last year, Muslim extremists (many from Libya or using it for safe haven) paired with Tuareg separatists in a bid to seize control of Mali. The offensive was crushed by French forces, assisted by some moderate African troops. With French and US drones along with French combat troops keeping watch over northern Mali and Niger, a militant arms convoy carrying 3 tons of arms from Libya to Mali was destroyed in early October (along with the capture of several al-Qaeda linked combatants).

Farther north, despite political strides this year toward domestic stability, Tunisia has taken a hit from Libya’s chaos. Fitch Ratings assigned Tunisia last week a long-term financial “Negative Outlook” because “Libya’s fragmentation has destabilized the region,” and many Libyans have flooded into Tunisia. Tens of thousands of Libyan refugees from embattled Tripoli, mostly professionals and their families, have fled across the border but Libyan ASL cadres have been a source of Tunisian violence this year.