The limits of the Georgia prism in Ukraine 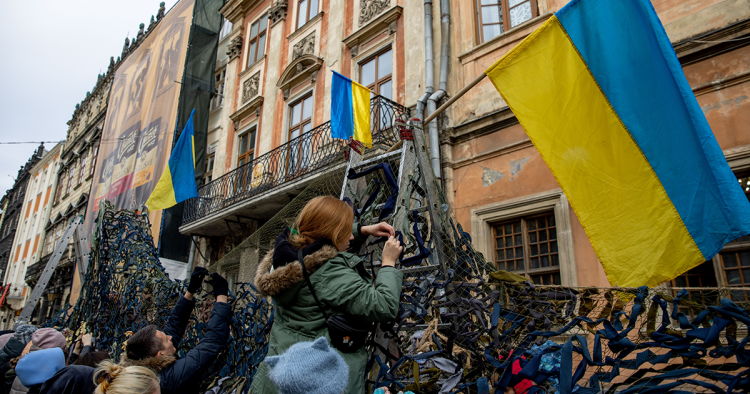 There is no question that watching Ukraine under Russian attack is deeply personal for us Georgians. But it is important to consider the differences between Georgia in 2008 and Ukraine today. Some headlines have focused on establishing parallels between the two, which suggests that Vladimir Putin is re-enacting his “Georgia playbook” in Ukraine. While there are similarities, we argue that overstating them leads to a deeper misunderstanding of both conflicts and leaves out significant differences that need to be addressed.

Before we turn to the differences, it is worth noting the similarities between the two conflicts. To begin with, in both cases the Kremlin’s decision to invade was driven by political objectives rather than material security. Since his speech at the 2007 Munich Security Conference, Putin has continuously insisted on the urgent need to counter NATO’s further eastward expansion as a national security imperative. International relations realists share this argument and assume that the U.S. foreign policy establishment lacks “cognitive empathy” and fails to account for rational Russian strategic anxieties. They also claim this is why negotiations have failed. However, the link between Putin’s wars against Georgia and Ukraine and Russia’s national security are tenuous. First, since the 2008 NATO Summit in Bucharest when neither Georgia nor Ukraine succeeded in securing a NATO Membership Action Plan (MAP), tangible accession discussions for the two countries have largely stalled and will likely remain this way for the foreseeable future. Putin knows this. Second, if Putin were genuinely frightened of NATO enlargement toward Russia, he would have moved his military closer to NATO borders as soon as the alliance expanded in 2004. We did not see this happen either, with the exception of Kaliningrad and the Black Sea. Lastly, Russia is a nuclear power, and as a former Cold War superpower, Putin has been vocal about his mission to revive its previous great power status. Putin is visibly pining for recognition both within Russia as well as abroad as the leader who, against all odds, managed to restore Russia’s long-lost greatness. This was perhaps clearest in his speech in Munich in 2007, when he called the dissolution of the Soviet Union a “[great] geopolitical tragedy.” For these reasons, we can assume both wars have been driven by political goals rather than Russian material security concerns.

The second motivating force behind Putin’s actions in 2008 and 2022 is regime survival. Here we should emphasize the domestic-foreign policy nexus; Putin’s wars are a continuation of domestic politics. Aside from the general paranoia stemming from the “color revolutions” that occurred throughout the region in the 2000s, he has also long feared economic development and democratic contagion coming from Georgia and Ukraine. Georgia’s economic growth averaged 10.5% per year between 2005 and 2007. In comparison, in late 2021 and right before the 2022 invasion, Ukrainian GDP expanded 5.9% year-on-year in the fourth quarter of 2021, up from 2.7% the previous quarter. Both Georgia’s and Ukraine's economies had been on the rise right before their respective invasions. Thus, it seems as though Russia feared that Georgia and Ukraine could provide prosperity and opportunity to their people outside of the Russian alliance system, which in turn could also potentially surpass what Russia is able to offer its own people as well. As a result, in an effort to prevent democratic Georgia and Ukraine from becoming more economically integrated with the West, Russia resorted to hostile actions.

Another source of concern for the Russian regime is the effects of democracy in Russia’s so-called “near abroad.” Putin has long tried to contain its spread in the region writ-large, which has been a motivating factor for both invasions. Putin has instead tried to capitalize on the notion of a Russkiy mir (the “Russian world”), an ethno-corporatist model of neo-imperial autocracy. However, prosperous, democratic alternatives near Russia’s borders pose a symbolic challenge to this narrative. Conversely, an unstable Georgia and Ukraine validate the narrative that Westernization leads to tragedy. In Russia, memories of the chaos and privation of the “wild 90s” remain fresh. Contrary to Kremlin narratives, however, a prosperous and democratic Georgia and Ukraine would suggest Westernization is not only possible in Eurasia, but perhaps also that Russia’s poor experience is more complicated than the state narrative suggests.

Putin’s desire for regime change in Georgia and Ukraine must also be seriously considered. It is widely known that back in 2008, Russian Foreign Minister Sergey Lavrov demanded then Georgian President Mikheil Saakashvili’s removal from power. The same occurred on Feb. 25, 2022 with Ukraine, when Putin called on the Ukrainian military to overthrow the government as a precondition for peace talks.

Despite the similarities, the differences between Georgia in 2008 and Ukraine today are stark and arguably more significant. There are five major problems with comparisons between the August 2008 war in Georgia and the current one in Ukraine.

First, Putin does not consider Ukraine to be a truly sovereign country that can and should exist independent of Russia. Back in 2008, Putin told U.S. President George W. Bush that “Ukraine is not even a country.” Later, in 2019, during an interview with Oliver Stone for his broadly inaccurate documentary, Revealing Ukraine, the Russian president stated his belief that “Russians and Ukrainians are one people [...] one nation, in fact.” He elaborated that “when these lands that are now the core of Ukraine joined Russia [...] nobody thought of themselves as anything but Russians.” Just days ago, during his video statement-turned-revisionist history lecture, Putin reminded his viewers that Ukraine as a country was “created by Russia,” with Vladimir Lenin as its chief architect. By comparison, seizing Georgia’s nationhood was not a clear Russian objective in 2008, and Moscow has not sought to portray it as an indelible part of Russia.

Second, there is also an economic factor. While the Georgian market is small and thus unattractive for Russia, “Ukraine offers a large consumer market, a highly educated and cost-competitive workforce, and abundant natural resources,” as noted in the 2021 Investment Climate Statement published by the U.S. Department of State. Ukraine has a high ranking not only in natural resources but also in agriculture and industry, which are essential for both European and global markets. Ukraine’s economic assets are well known to Putin, and bearing these in mind, we can argue that he has long-term economic interests. Even though his ongoing “military operations” are very costly, his hope is likely that the potential gains will be advantageous for the Russian market in the long run.

Third, we posit that in Putin’s worldview, his core beliefs have remained intact, but the international and domestic factors that play into shaping his assumptions have not been static. It is important, however, to distinguish between the domestic realities, perceived or actual, that play into Putin’s policies. Based on recent polling data, his approval rating is once again on the rise after a period of stagnation and moderate decline. As of mid-February 2022 (before the invasion of Ukraine), 71% of Russians surveyed by the independent Levada polling agency expressed support for his activities as president. However, underneath the approval ratings lies a weakened economy and growing public unrest, which suggests the regime’s grip on power is being gradually shaken. Thus, a “rally ‘round the flag” military adventure that boosts patriotic feelings, and consolidates elite support, may have seemed like a timely solution for Putin.

By contrast, in 2008 then-Prime Minister Putin enjoyed largely unchallenged and unquestioned domestic popularity. As Levada polls indicated in February 2008, just six months before the August War with Georgia, 85% of the surveyed Russian population approved of Putin. We can assume that Putin in 2008 and Putin in 2022 differ from each other. His thinking has continued to evolve and he has become much more isolated and, some would even argue, paranoid. Historically, this resembles what happened to Josef Stalin in the 1950s, who hardly left the Kremlin and lost touch with his own country.

Fourth, it is also significant to compare the timelines between Russia’s 2008 recognition of Abkhazia’s and South Ossetia’s independence and its recognition of the self-proclaimed Donetsk and Luhansk republics earlier this year. While the Georgian breakaway regions were not officially recognized by Moscow until two weeks after the end of the war, the Russian recognition of Donetsk and Luhansk was signed three days before Putin launched the broader Ukraine invasion. In other words, while in Georgia’s case, the recognition of Abkhazia and South Ossetia was the culmination of the war, in Ukraine it became clear early on that the recognition of the breakaway regions in Donbas as independent states was far from Putin’s only goal, but rather a prelude to a full-scale invasion.

Finally, no one has forgotten that Putin pinned the blame on Georgia for starting the August War. However, the EU-commissioned Tagliavini report concluded that while Georgian forces may have fired first, they were essentially entrapped by a series of Russian provocations. In Ukraine’s case, however, Putin claimed that Kyiv had mobilized the military (in reality, it put reserves on high alert and avoided a general mobilization), which demanded “special military operations.” The attack against Ukraine, Putin claimed, was meant to protect the Donbas republics.

To summarize, the five differences discussed above, including Putin’s perceptions of Ukraine, economic factors, fluctuations in Putin’s worldview and his domestic support, difference between the timelines of Russia’s recognition of the breakaway regions in Georgia and later Ukraine, and the Kremlin’s contrasting framing of the military operations in these two countries, may account for why Russia has adopted a different approach this time around and began bombing Kyiv on the very first day of the invasion. Given these key differences, the conflict in Ukraine is unlikely to see the same ending as that in Georgia in 2008 unless the West collectively steps up its defense through increased military aid. As President Volodymyr Zelenskyy reportedly said when declining U.S. offers to evacuate him: “The fight is here; I need ammunition, not a ride.”

Natia Gamkrelidze is a fellow at the Davis Center for Russian and Eurasian Studies at Harvard University, a Ph.D. Candidate in Political Science at Linnaeus University, Sweden, and a Visiting Scholar at the Russia and the Caucasus Regional Research (RUCCAR) Center at Malmo University. She is an expert on Russia, the United States, European Union, and NATO policy towards the post-Soviet region.

Tinatin Japaridze is the author of the upcoming book Stalin's Millennials: Nostalgia, Trauma and Nationalism (Rowman & Littlefield, March 2022) and currently serves as the Director of Policy and Strategy at The Critical Mass. She previously worked for the City of New York in various capacities. Japaridze was formerly the United Nations Bureau Chief for Eastern European media, and simultaneously hosted and produced her own show on U.N. Radio. The views expressed in this piece are their own.