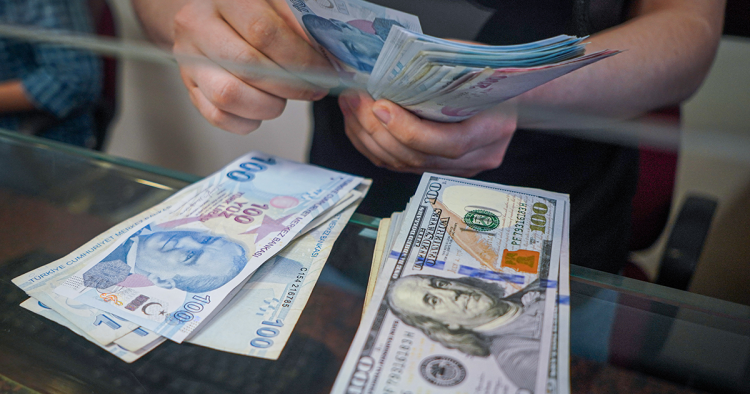 The Turkish economy’s foreign exchange (FX) liquidity problem is getting worse. So far this year, the foreign trade deficit has averaged $9 billion per month, while the trade surplus from services sectors like tourism and transportation has not been able to cover this. As a result, the current account balance, including both goods and services trade and some income transfers, has been in the red with a monthly deficit of around $5 billion. The gross FX and gold reserves of the Central Bank of the Republic of Turkey (CBRT) total $114.2 billion, but in reality they are far less. When liabilities are omitted, the net reserves are just $13.4 billion. FX swaps with domestic commercial banks and foreign central banks are widely used to boost the size of the CBRT’s reserves. When these quasi-liabilities are removed as well, the total net reserves fall to $-58.6 billion. The Treasury holds its FX assets in CBRT accounts, and these deposits are not part of monetary policy. When they too are removed, the final net total comes to $-64.1 billion, as low as it was in December 2021, when Turkey was hit by a massive currency shock.

Turkey once again found itself in a similar situation in July 2022, when the continuous current account deficit dried up FX liquidity and CBRT reserves fell to extremely low levels. The government was able to avoid another shock at the time by further restricting capital mobility via new regulations from the Banking Regulation and Supervision Agency (BRSA), the banking regulatory authority, and the CBRT. According to the BRSA’s decision, companies with an obligation to conduct an external audit can borrow Turkish lira (TL) loans if their FX financial assets do not exceed 10% of their net sales or total assets. New CBRT regulations, in line with the government’s so-called “liraization strategy,” force banks to buy government bonds, despite their much lower yields compared to the current and expected rates of inflation, if their ratio of local currency-denominated assets to total assets is less than 50%. Both regulations are designed to push the real sector to sell FX to the CBRT indirectly and then invest the cash in FX-protected TL deposit accounts. These accounts provide a Treasury- and CBRT-backed guaranteed return equivalent to the appreciation of the dollar, euro, and sterling against the lira. Through the inflow of these deposits, the CBRT has maintained its reserves and prevented a very likely FX shock.

These regulations were revised in October 2022 given the looming risk of an FX shock. By lowering the ceiling for FX assets from 15 million TL to 10 million TL, almost all companies are now obliged to sell their FX assets to gain access to cheap lira-denominated bank loans. Banks also rushed to buy local-currency government bonds with yields of nearly 10%, while the dollar-denominated government bonds have an even higher return. In addition, taxes on corporate FX income gains were exempted until the end of 2022, provided companies convert their FX assets to FX-protected deposits.

These extreme and extraordinary moves have helped to stabilize the lira for now. They have also had some secondary benefits, including helping to slow down the inflation rate and making it easier for the government to borrow in a year of record high deficits. However, these temporary gains have some significant side effects as well, including credit rationing by private banks, a lira that remains too expensive to reduce Turkey’s foreign trade deficit, and anxiety among both the private sector and wealthy households over the prospects for additional capital restrictions. The majority of households, which have no significant savings and can hardly afford their daily expenses, are happier. This raises their expectations for the coming year, as reflected in the consumer confidence indices compiled by both the Turkish Statistical Institute (TUIK), the state’s statistics agency, and Bloomberg HT, a local subsidiary of Bloomberg news. At first glance, it may seem as though the government has discovered a perfect set of policies to ensure stability, at least for the next year, but these policies are ultimately unsustainable because of the large current account deficit. Yet the government’s main goal is not to preserve long-term economic stability, but to boost activity ahead of the upcoming elections in June 2023.

Therefore, these economic policies are likely to be challenged by expansive monetary and fiscal policies starting in January 2023. Although there have been some improvements in consumer confidence, households still feel the dramatic decline in their purchasing power as inflation remains extremely high, at 85.5%, while broadly-defined unemployment is at 19.8%. These numbers reflect official figures and do not align with many people’s personal observations about the state of the economy. The government’s failure to live up to its economic promises since the transition to the presidential system in 2018 has limited its power of persuasion. As a result, significantly raising wages and boosting employment are musts for the Justice and Development Party (AKP) to win in the next elections. To achieve these goals, it is likely to introduce a major raise for minimum wage earners, civil servants, and retirees and roll out subsidies and cheap loans to businesses of all sizes and sectors.

The 2023 draft budget has been sent to parliament for final amendments and enactment. The government expects to end this year with a 461 billion TL deficit and next year with a deficit of 659 billion TL. The budget deficit to GDP ratio is expected to be near 3.5%. This is already eye-catching, but the situation is likely to get even worse, as the government may need to spend more ahead of the elections and it is difficult to control funding expenses as around two-thirds (65.7%) are denominated in FX and gold.

The government is also preparing a new credit expansion program for commercial loans. The Credit Guarantee Fund (CGF) is a key mechanism for small businesses to access funding from private banks to address shortages of net working capital. Private banks may choose to scale back their operations to avoid losing money on providing cheap loans to the real sector and buying low-yield government bonds. While the CGF alleviates the risk of default, interest rate risk — that is, the uncertainty of funding long-term fixed-rate loans with short-term deposits — is still a critical problem. This risk is greater than the CBRT seems to believe, as it may lead to the evaporation of banks’ capital if the government is forced to dramatically increase rates after the June elections. Three major state banks accounting for 40% of the credit market will be used as much as possible. Indeed, this is the strongest tool at the government’s disposal as private banks cannot be forced to lend in such an artificially low interest rate environment.

Turkey is greatly in need of FX flows as its short-term external debt is $185.9 billion and its current account deficit is expected to remain at around $40 billion until the elections. The CBRT’s reserves are insufficient and, as a result, capital restrictions are enforced to push businesses to convert their FX assets to FX-protected debt. This mechanism works well enough to maintain short-term stability in the currency markets. However, the main target is winning the election and that will require more economic dynamism. Deficit spending and cheap loans from state banks are the major tools at the government’s disposal. The CBRT’s policy rate has already declined to 10.5% and will be cut further to 9%. The key side effect of all these policies is greater demand for FX assets.

To offset this demand, informal capital inflows have been encouraged since the beginning of the war in Ukraine. For the first eight months of the year, the CBRT's balance-of-payment statistics include a total surplus of $28 billion in “net errors and omissions.” The origin of these inflows is unknown, but they may represent Russian citizens and entities bringing their FX and gold assets to Turkey. The U.S. Department of the Treasury’s Office of Foreign Assets Control (OFAC) has warned the Turkish government and business associations about its concerns over the inflows and the possible risk of sanctions. Use of the Russian credit card system Mir was also suspended by all banks operating in Turkey, after OFAC declared it a violation of sanctions. These developments will reduce the informal inflows going forward; however, the Turkish government is currently negotiating with its Russian counterpart over extending payments for natural gas imports. This does not violate U.S. sanctions and there is no direct tool to stop it if Russian President Vladimir Putin and Turkish President Recep Tayyip Erdoğan reach an agreement.

To sum up, the type of economic policies that the AKP needs to win the upcoming elections in June require more FX reserves. Capital restrictions will help to retain FX already in Turkey, but more will be needed. Russia is one potential source via unofficial means or through formal credit lines with Gazprom, Russian state banks, or the Central Bank of Russia. No agreement has been reached yet, but Putin’s offer to make Turkey a gas hub may be interpreted as a step toward further strengthening bilateral economic ties.

If no funds are forthcoming from Russia or another country or investor, Turkey’s expansionary economic policies will lead to a new FX shock. Turkey is already listed only slightly above Pakistan, Egypt, and Tunisia in international credit ratings due to heightened concerns over its ability to make FX-denominated payments to bondholders and importers on time. In August, Moody’s downgraded Turkey’s sovereign credit rating to B3, the lowest it has ever been, while S&P and Fitch rate it as B, the second lowest in the country’s credit rating history. The credit default swap premium for the Turkish Treasury’s sovereign debt instruments is hovering around 700, a very high level indeed, although rates were worse during the 2001 and 2008 crises.

Turkey’s financial stability and industrial production will probably be maintained until the beginning of 2023, at which point generous economic policies will start pushing both production and demand. For this strategy to be successful until the June elections, more FX resources will be necessary. The amount and timing of these resources will be key to evaluating the outlook for the Turkish economy in 2023 and forecasting the election results in June.

M. Murat Kubilay is an independent financial advisor on the Turkish economy and a non-resident scholar with MEI’s Turkey Program.