Literature after the Arab Spring 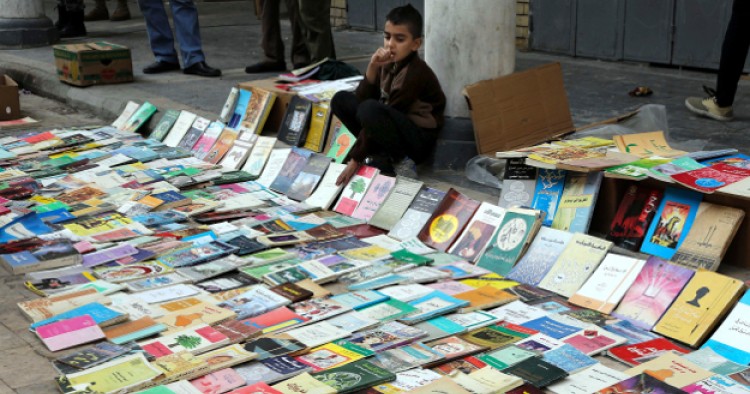 The Arab Spring’s seismic impact on the region not only shifted the political landscape, it also sparked a new wave of cultural thought. It refocused attention onto Arabic arts and literature as a prism through which various scholars sought to understand ongoing social changes.

This year marks the fifth anniversary of many of the uprisings. Words Without Borders has released an issue marking the anniversary, but there has been little else of note. In this issue, editors Elisabeth Jaquette and Nariman Youssef define post-Arab Spring literature as reflecting the aftermath of a historical moment—whether it’s the turmoil of war, chaos of proliferating paramilitary groups, or mass repression of coups and transition governments.

One novel that reflects the Arab Spring’s authoritarian backlash is The Queue by Egyptian author Basma Abdel Aziz. Written in Arabic in 2013, it will be published in English this May. Set in an unnamed country after suppression of a popular uprising, it narrates an authoritarian world that would have made the sinister ‘Committee’ in Sonallah Ibrahim’s eponymous novel proud. Known as the Gate, the draconian regime requires its subjects to seek permission—in a queue that grows each day—for the most banal of tasks. “It wasn’t long before the Gate had made all procedures, paperwork, authorizations and permits—even those for eating and drinking—subject to its orders and control. Even window-shopping became subject to a fee…”

While the Gate’s insertion into every aspect of people’s lives contributes to the novel’s dystopic vision, it’s not difficult to see it also as a realist depiction of some modern-day regimes. In post-coup Egypt, a schoolboy was detained for bringing a ruler to school with the Rabaa sign (a signal of an anti-coup stance), and 14 women—some as young as 15—had been jailed for passing out yellow balloons in support of ousted president Morsi.

This is a far cry from literature set in the midst of the Arab Spring, of which Egypt was the most prolific producer. More documentary in nature, earlier Egyptian literature was euphoric in tone. Take Mona Prince’s Revolution Is My Name, an eyewitness account of the first 18 days of protests. Prince portrays, breathlessly, the frantic and exhausting shuffle from Tahrir Square and back to force Mubarak out of office. It joins the large body of Arab Spring literature belonging to Egypt, like Ahdaf Soueif's Cairo: My City, Our Revolution, Saad Al-Kersh's Al-Thawra Al-Aan: Yawmiyat Min Midan Al-Tahrir, and Ezzedine Choukri Fishere's Bab Al-Khuruj.

Literary output from Tunisia has differed by lingering upon the era of President Zine el-Abidine Ben Ali. The most prestigious Arabic literary prize, the International Prize for Arabic Fiction, was recently awarded to Tunisian author Shukri Mabkhout for The Italian. Although he claims it was inspired by the Arab Spring, the novel is set within the dark period of transition between President Habib Bourguiba’s rule and Ben Ali’s in the 1980s. In some ways, this retrospective body of work can be compared to post-Saddam Iraqi output, in that it has only just recently come to terms with the repression and censorship of the Saddam era. Other work after the Spring is likewise retrospective and portrays society under the Ben Ali regime, like Kamel Zoghbany’s Akhlat  and Kamel Riahi’s Al-Hay Yrawah.

It’s important to understand what authors—who witnessed not only the uprisings but the literary movements that flourished in their midst—think of literature after the Arab Spring. Novelist Abdel Aziz characterizes the tone of this early Tahrir Square literature as “emotionally charged, given the considerable amount of violence.” Sherif Dhaimish, of Darf Publishers, characterizes broader Arabic literature of this period by an early wave of optimism, followed by disillusionment.

But distinctions between the first phase of exhilaration and the disillusionment that followed aren’t so clear-cut, considering the uprisings involve vastly different systems of governance. Perhaps Egyptian literature adheres to this periodization with its initial crop of euphoric accounts at Tahrir. In Syria, however, initial protests certainly didn’t produce a distinct literary optimism.

A powerful example is Samar Yazbek’s prose-poem Waiting for Death, which conveys the ubiquity of death and violence in Syria in 2011. “The killers are everywhere. Death is everywhere.” State response to protests has been brutal: “images of the tortured children and the murdered young men return.” Suffocation and entrapment permeate scenes of sectarianism: “gangs go to our Sunni neighbors and frighten them, saying that we will kill them. They come to us, and say that they will kill every single Alawite.”

Rasha Abbas, Syrian author of short-story collection The Gist of It, worries that texts motivated by revolutionary fervor—like popular Egyptian texts set in Tahrir Square—might override themes of political struggle. This struggle, she argues, did not simply vanish with the rise of protests. “It makes sense that those issues will preoccupy the majority of writers, but they shouldn’t be the only topics that get written about … I don’t think there’s any justification for cramming slogans into a text.”

Certainly, the overwhelming cultural flux at the height of the uprisings is a preoccupation among writers. So colossal has been the literary output that Youssef Rakha, Egyptian author of The Sultan’s Seal, spoke of an “Arab Spring Industry” geared toward the “lucrative practice of political analysis.” “The opinion piece, talk show appearance, and Facebook status update overtook other generic possibilities. Arab Spring theorizing … has become the most popular ‘literary’ activity.”

Abdel Aziz considers the literary tide a positive outcome, insofar as it has given people the courage to find their voice. “Breaking down the political walls of fear also had the impact of breaking down personal fears of being judged.” Likewise, Abbas lauds the decline of auto-censorship and trepidation that now allows people to record the everyday: “people have gained courage to write more about themselves … daily life and emotions that wouldn’t have been considered worthy before or would have been ignored or mocked for lacking gravity....”

It wasn’t only writers and artists who participated in the cultural blitz. Analysts also seized upon literature as an artifact through which the path to the uprisings could be traced. Stanford scholar Alexander Key argued rebellion was central in literature leading up to the Spring and unrest could be glimpsed in its pages before the uprisings: “Modern Arabic literature as a genre doesn't have protest centrally embedded in it until these novels in the 2000s.”

Syrian author Abbas is wary of literature being desperately grasped as an artifact of the Spring and jokes about this facile framework. “We could, just for fun, write a scholarly article about a book to be published in 2020 and say, ‘Its scattershot and daring style is faithful to the spirit of the revolution, which did away with all taboos’.”

Meanwhile, The Guardian recently published perspectives of well-known Arab writers on the five-year anniversary, and it reads like an uneven collage of forlorn treatises. While almost all authors are globally recognizable, there is an imbalance given the perspectives included are from those who experienced the Arab Spring first-hand as well as those who live outside the region This haphazard assortment of political analyses and literary voices sadly resonates with Rakha’s notion of the “Arab Spring Industry,” where the events of the “Arab Spring have upstaged the literary.”

While many authors interviewed for this article claimed it was too early to draw the parameters of literature after the Arab Spring, their investment in the contested territory of this discourse is undeniable.