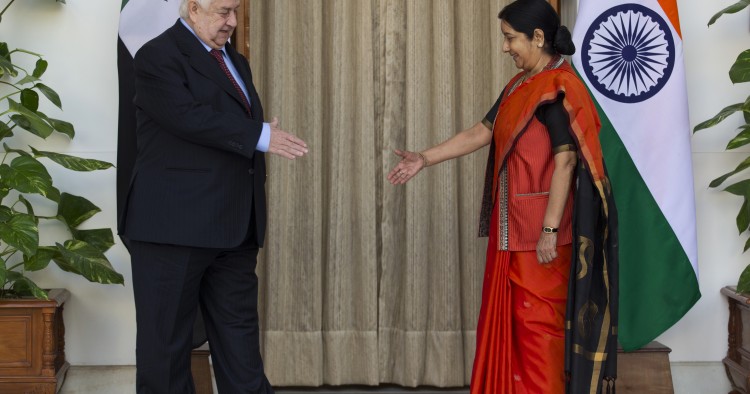 India has sought to continue its five-decade long cordial relationship with Syria despite the conflict raging there and has been providing muted support for Bashar al-Assad’s government. However, as the Syrian conflict has dragged on, it has become increasingly clear that the conflict in Syria is the epicenter of the tremors that are shaking the region, placing India’s own national interests at risk. This essay examines the arc of India’s policy toward the Syrian crisis, within the context of the broader thrust of Indian foreign policy towards West Asia under Prime Minister Narendra Modi.

Since Narendra Modi took office in May 2014, India’s foreign policy towards its immediate and extended neighborhood has become the major thrust of his administration. West Asia occupies a pivotal position in India’s immediate maritime and extended continental strategic environment. The unprecedented number of high-profile visits to and from the region in the past several years reflect West Asia’s economic and strategic importance to India. The Modi government’s policy outreach to the region has been predicate on strengthening economic ties and developing strategic partnerships with West Asian countries.

Coupled with the domestic reforms introduced by the administration, these outreach efforts have generated positive results. There has been substantial growth in India’s economic engagement with West Asia, and with the Gulf countries in particular. There has been progress on the strategic front as well, especially with respect to the extradition of persons wanted for their roles in the 2008 Mumbai terror attacks, over Pakistan’s objections. In addition, countries that had supported Pakistan in the past (e.g., Saudi Arabia and U.A.E.), have minced no words in condemning terrorist activities emanating from its soil targeting India.[1]

The realpolitik thrust of Indian foreign policy under the Modi government with respect to West Asia is also reflected in its warming relations with Israel. After the U.S. and Russia, Israel is one of India’s largest arms suppliers, with annual sales of about $1 billion.[2] India cast an abstention on the July 2015 U.N. Human Rights Council in Geneva resolution (A/HRC/29/L.35) condemning Israel over a U.N. report on the alleged war crimes it committed during the 2014 Gaza conflict — a deviation from the traditional Indian position on Palestine.[3] India’s partnership with Israel, which had been rather discreet under the United Progressive Alliance (UPA) coalition government, came out into the open with Pranab Mukherjee’s October 2015 visit — the first such visit by an Indian President.[4] A year later, commemorating 25 years of diplomatic relations, Israeli President Reuven Rivlin reciprocated the visit. If, as expected, Narendra Modi visits Israel, he would be the first Prime Minister of India to have done so.

Another essential aspect of the current government’s foreign policy has been its outreach to the Indian diaspora in West Asia. Ensuring the safety and well-being of this expatriate community, which has grown to nearly seven million and accounts for over half of annual remittances to the Indian economy,[5] is a high priority for the Indian government, all the more so given the turmoil in the region. The case of 46 Indian nurses taken hostage in Iraq in 2014[6] underscored the need for India to maintain constructive relations with regional governments as well as to develop the capacity to safely evacuate expatriate workers from conflict zone.

Energy security as it relates to West Asia is a major concern for India, as more than two-thirds of its oil and gas imports originate from the region. Oil and gas infrastructure and routes have been key targets of  extremists, militias, and warlords. Indeed, the generalized climate of insecurity and instability that has prevailed throughout West Asia over the past several years has impelled Delhi to formulate a coherent, multidimensional strategy toward West Asia. Under the Modi administration, there is evidence that such a strategy is taking shape. India has begun to forge defense ties with its Gulf Arab partners. In an effort to make the country’s domestic energy sector more attractive to Gulf and other investors, India has modified its oil and gas exploration policy, shifting towards a revenue-sharing to a production-sharing model.[7] Low oil prices have bought time for India to make these and other adjustments to its West Asia policies. However, the unabated conflicts in the region are eroding the economic capacities of even the rich Gulf nations, which are spending enormously on defense, incurring huge domestic opportunity costs. There are signs that the economic crunch in the face of falling oil revenues has already adversely affected Indian expatriate workers in the region.[8] The G.C.C. countries’ fiscal deficits and the expectation that oil prices will remain relatively low in the near term suggest that the Modi government’s efforts to attract investment from the region could face strong headwinds.

Syria is the eye of the storm that is engulfing the region. Owing to its strategic location in the so-called “Shia Crescent,” Syria has become the proxy battleground for the two major regional powers, Saudi Arabia and Iran. The breakdown of the state order and the security vacuum has been partially filled by the Islamic State (ISIS, or Daesh). Syria has also been the pivot of U.S.-Russia contestation in the region, with the two powers supporting opposing sides in the conflict, though with of the stated aims of pursuing tactical cooperation to confront ISIS. Although Syria is not a major oil producer nor does it have a large Indian expatriate community, it is nonetheless central to the regional rivalries and conflicts that have profound implications for India.

India and Syria have long maintained cordial relations. Even on contentious issues such as Kashmir, Syria has endorsed India’s position, while India has supported Syria’s regarding the status of the Golan Heights. President Assad has also supported India’s bid for seat on the U.N. Security Council.

Since the Syrian conflict erupted in 2011, India has maintained cautious neutrality. Delhi has consistently called upon the parties to pursue a political solution and to abjure violence.[9] Furthermore, the Indian position has been that, a solution to the conflict must be found through a Syrian-led peace initiative and reiterated its opposition to external military intervention. Although Syrian officials have reportedly urged India to play a proactive diplomatic role, Delhi has declined to play a mediatory role.[10] At the same time, however, India has sought to maintain its traditionally cordial relationship with the government in Damascus. Official communications have remained open — including the embassies in Delhi and Damascus throughout the conflict.

On a  number of occasions since the conflict erupted, Syrian officials have been received in Delhi, including last January’s visit by Deputy Prime Minister (and Foreign Minister) Walid Muallem during which he requested humanitarian assistance in the form of medical and food supplies to ease the suffering of Syrian citizens.[11] In addition, India has extended a $25 million line of credit to Syria for the rehabilitation and modernization of the Hama Iron & Steel Plant and $100 million line of credit to partially finance the extension of the Tishreen Power Plant.[12] In 2014, at the peak of violence, India sent a business delegation led by Assocham to Syria.[13] Therefore, Indian has remained engaged with Damascus on both the diplomatic and the economic fronts.

Since the emergence of the ISIS in 2014 and, particularly after the group’s subsequent explicitly stated threat to expand its terror campaign into India, Delhi has sought greater policy convergence with the Syrian regime.[14] India has long been grappling with  terrorist activities of Lashkar-e-Taiba (LeT), Jaish-e-Mohammed (JeM), and Hizbul Mujahideen,  among others. The threat from ISIS gained prominence following the July 2016 terror attack in Dhaka, which was claimed by Islamic State. The National Intelligence Agency (NIA), Anti-Terrorist Squad (ATS), and state police forces reportedly arrested over 50 ISIS supporters/sympathizers between late 2015 and mid-2016.[15] In addition, there is heightened concern that youth could fall prey to ISIS “cyber radicalization.”[16] While the extent of ISIS’ actual reach in India is still debated, the threat posed by the globalization of terror networks through cyber radicalization and “lone wolf attacks” cannot be ignored.

Given these concerns, Syria has acquired new importance in India’s policy towards West Asia. The Minister of State for External Affairs M. J. Akbar visited Syria in August 2016 and met with President Assad. This is the first major outreach since the conflict began. According to Syrian Arab New Agency (SANA), counterterrorism and partnering in Syrian reconstruction were the two main aspects that Minister of State for External Affairs  emphasized during his visit to Syria.[17] It is worth noting that the meeting marked a sharp departure from the U.S. position on Syria, which has favored the removal of the Assad regime. During the visit, the Syrian President expressed appreciation for India’s “objective” position on the conflict and invited New Delhi to play a greater role in the reconstruction of the war-torn country.[18]

Syria at present, represents a major foreign policy dilemma for India. India’s policy of non-intervention in countries’ internal affairs has paid dividends till now, eliciting cooperation from those regimes to whose attention it has brought its concerns. And India’s conviction that external military interventions are counterproductive is time tested. However, the need for peace and stability in Syria has become a global concern, requiring the collective efforts of all major players and stakeholders. Whereas it is prudent for India to decline to engage in a foreign military intervention, it is imprudent to shy away from playing a role in building international support for peace initiatives.[19] India, with the advantage of having cordial relations with all of the stakeholders in the Syrian conflict — Syria, Russia, Iran, Saudi Arabia, Britain, the U.S. and the European countries — has the potential to play a significant constructive role in advancing multilateral peace initiatives.

Furthermore, India has leverage with the Assad regime given the mutual understanding and support that has accrued over the years. India is also the third-largest investor in Syria. In addition, India assisted the Organization for the Prohibition of Chemical Weapons in the destruction of Syria’s chemical weapons and related facilities. Therefore, given its interests in Syria and the wider region, India could, and should — through a judicious combination of economic diplomacy and “soft power” — play a more proactive peace-making, and ultimately perhaps a peacekeeping role as well.

India has vital economic and strategic stakes in West Asia’s. Accordingly, India’s foreign policy towards the region is acquiring strategic dimensions. India’s relations with Syria throughout the conflict has been cordial and closely consistent with its overall policy of non-intervention. However, Syria has become the nerve center of instability and terrorism, thereby placing Indian interests at risk. Therefore, it is crucial that Syria be located more centrally in India’s strategic calculations regarding the region. And it is both possible and highly desirable that India play a more proactive role in peace initiatives in Syria.

[4] See Ministry of External Affairs, Government of India, “President’s speech at the Banquet hosted by the President of Israel in Jerusalem,” October 14, 2015, accessed January 9, 2016, http://mea.gov.in/outoging-visit-detail.htm?25933/Presidents+speech+at+the+Banquet+hosted+by+the+President+of+Israel+in+Jerusalem+October+14+2015.