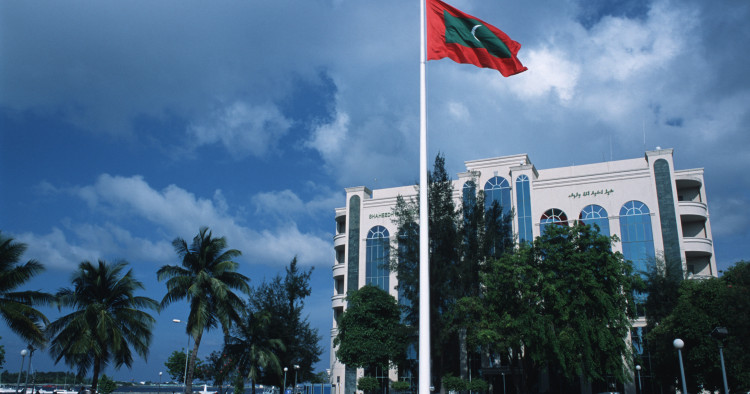 The Indian Ocean archipelago of the Maldives, located southwest of India’s coast along important maritime shipping lanes, has just 298 square kilometers (115 square miles) of land, but is composed of some 1,190 coral islands with about 200 inhabited by Maldivians; it also has an estimated population of just over a half million, a third of whom are foreign workers on the resort islands.[1] Islam has long been the archipelago’s dominant faith. The 1932 Constitution made shari’a (Islamic law) the “basis of all administrative and political governance,”[2] and its 2008 successor restricts citizenship to practitioners of Islam.[3]

While there have been academic studies on some its neighbors’ relations with countries in the Middle East, such as India, Pakistan and Sri Lanka by this author and others, there has been nothing of that nature regarding the Maldives, most likely because of the paucity of available published sources on contemporary Maldivian affairs and the fact that many small states are not given much attention by academics. This article seeks to address that oversight.

Maldives’ Engagement with the Middle East

The deep penetration of Islam into the culture and national identity of Maldives is the central strand linking the archipelago to the Middle East. Islam was brought to the Maldives by Muslim traders and itinerant holy men. The North African traveler Ibn Battuta, who visited the Maldives in 1341 and served there as a judge, attributed the conversion of the Maldives’ then-Buddhist King Koimala to Islam in 1153 to Abu al-Barakat, an Amazigh merchant, who is buried on the main island of Malé.[4] Since then, as journalist J.J. Robinson, who spent several years in the archipelago, notes: “Isolation and intertwining of Islam with national identity has made the majority of Maldivians fearful and defensive towards perceived threats to either.”[5]

The Maldives, which attained full political independence from Britain in 1965 as a constitutional Islamic Sultanate, became a republic three years later. Since independence, Islam has played a central role in Maldivian politics and life in general. With the promulgation of the Maldivian constitution in 2008, Islam became the official state religion. The fact that both land ownership and citizenship are restricted to Sunni Muslims has contributed to the country’s religious homogeneity. So, too, has the prohibition on proselytizing (i.e., recruiting new members from other faiths). The constitution requires that the president and cabinet ministers be Sunni Muslims. And Maldivian law criminalizes “criticism of Islam.”[6] The Maldives is therefore not just the smallest Muslim country in the world but for all these and other reasons claims to be the only “100% Muslim Nation.”

Contact with the Arab Middle East has influenced how Islam has evolved in the Maldives. It is worth noting that Maumoon Abdul Gayoom, the Islamic modernist scholar president who dominated Maldivian politics for thirty years (1978-2008) and preached hardline Islam, had spent his adolescence and early adulthood in Egypt from 1950-1969 and completed a master’s degree in Islamic jurisprudence at Al-Azhar University.[7]  “[Gayoom’s] politics, faith and worldview was largely shaped by what he saw and learned during almost two decades in the Middle East.  [When] Gayoom assumed power, he intertwined Maldivian identity with that of his own….”  [He regarded himself as] “the ultimate authority to impart the tenets of Islam.”[8]  During the latter years of his rule, Gayoom dealt forcefully both with Islamist religious adversaries, many of whom were educated in Pakistan, and with a democratic opposition.

Gayoom’s successor, Mohamed Nasheed, built a coalition that included the support of the Islamist Adhaalath Party, a broad-based group similar to the Muslim Brotherhood. Nasheed “abdicated responsibility for religious matters,” and felt that democracy was the way to combat extremism. This led to a “showdown between the Islamic Ministry and [independent] sheikhs and scholars … and a theocratic arms-race to portray oneself as the ‘most Islamic.’”[9] In 2010, Minister of Islamic Affairs Sheikh Mohamed Shaheem declared that Christians and Freemasons were working against Islam, while the real objective of Jewish ophthalmologists from Israel who performed free cataract operations was the harvesting of  eyeballs![10] The Israeli-Palestinian conflict became  a contentious issue in Maldivian politics as Nasheed had signed cooperation agreements (on tourism, health, and education) with Israel in 2009, while two years later the Maldives’ Foreign Minister Ahmed Naseem visited Israel sparking public protests and opposition from Adhaalath Party members. Nasheed, who was regarded as being too secular and too close to the West and Israel, was forced to resign from office in 2012. His successor, albeit briefly, Mohamed Waheed, attempting to strengthen his bona fides with Islamists by immediately hosting a visit by Palestinian President Mahmud Abbas, during which time Waheed was quoted as saying that “without a Palestinian state, there can never be Palestinian rights.”[11] In 2013, before being succeeded by Abdulla Yameen, half-brother of Gayoom, Waheed visited the West Bank.

During Gayoom’s lengthy period of autocratic rule, Saudi Wahhabi influence had seeped into the archipelago, as Maldivian students returned from attending madrassas in Saudi Arabia and Pakistan.[12] In the wake of the 2004 tsunami, the number of Saudi-sponsored imams rose dramatically, as did the level of Saudi mosque funding. These external influences, combined with the instrumentalization of Islam by local political parties and politicians have produced deep cleavages in Maldivian society and fueled the growth of extremist ideology and activity.[13] Over the past decade, disaffected and radicalized Maldivian youth have been drawn into the ranks of Islamic State (IS). A 2015 report by The Soufan Group estimated that about 200 fighters had traveled from Maldives to join IS.[14] Since 2017, Maldivian youth have been implicated in a number of terror plots.[15] In February 2020, a Maldivian radical group affiliated with Islamic State conducted an attack.[16] IS reportedly continues to have traction in the Maldives.[17]

The Maldives has only 14 embassies with resident ambassadors in Pakistan, Saudi Arabia, and the United Arab Emirates. The Maldivian capital, Malé, hosts nine embassies, with resident ambassadors from Pakistan, Saudi Arabia and the United Arab Emirates.[18] While the Maldives maintains diplomatic relations with 180 countries, 23 of those states are located in the Middle East (including Palestine), though ties were suspended with Israel in 1974, due to that country’s continued occupation of Egypt’s Sinai, and severed with Iran in 2016, in deference to Saudi Arabia after 41 years of indirect and uneventful relations. Israel was the third country in the world – after Britain and Sri Lanka – and the first Middle Eastern country to establish relations with the Maldives. Egypt, though in a diplomatic rivalry with Israel in Asia, did not set up formal ties with the Maldives until 1969, four years later, becoming the twelfth country to do so. Yet today, the two most important Middle Eastern countries having ties with the Maldives are the United Arab Emirates (UAE) and Saudi Arabia (KSA), which established formal relations in 1978 and 1981, respectively. Turkey set up ties in 1979, but it was not until January 2022 that its Foreign Minister Mevlüt Çavuşoğlu signed cooperation agreements (on trade, diplomatic training, the environment and culture), with Ankara promising to build an Islamic Center on the island of Hulhumalé, which is connected by a causeway bridge to Malé and the location of the Maldives’ main airport. Palestine established relations in 1982 with Palestine Liberation Organization (PLO) leader Yasir Arafat becoming one of the few foreign leaders to visit the Maldives two years later.

Tourism, for which the Maldives is best known, is the country’s greatest revenue producer accounting for some 90% of foreign exchange receipts, according to the Maldivian government. It was established during the 1970s and is confined to some eighty “uninhabited” islands away from the general population catering to all types of foreign visitors from those coming from the Middle East or other Muslim countries concerned with being served halal fare to more secular Westerners, Chinese and other Asians who might wish to imbibe alcoholic beverages or eat pork products, amenities prohibited outside the resorts. Indeed, the Maldives is a favorable destination for tourists from the Arab Gulf states and the rest of the Middle East with regular service to the archipelago’s main airport by Emirates and Ethihad Airways from the UAE, Saudi Arabian Airlines, Qatar Airways and Turkish Airlines. Kuwait Airlines will join these air carriers in October 2022.  Meanwhile, in February 2022, Emirates signed a memorandum of understanding to explore codeshare, interline, and joint vacation packages with Maldivian Airlines.[19]

In early 2014, then-Crown Prince Salman booked resorts on three whole islands for nearly a month and, in March 2017, there were reports that King Salman was in discussions with the Maldivian government for a deal estimated to be worth $10 billion to purchase or set up a long-term lease for 19 islands for development of high end residences and resorts as well as airports; opposition to the project was based on a perceived threat to sovereignty over territory and environmental problems should the Saudis establish an industrial zone as well.[20]

With limited resources, the Maldives depends heavily upon India for security and has sought economic and technical assistance from that country as well as China, its two most powerful Asian neighbors. Yameen, who ruled for five years until 2018, developed closer relations not only with KSA and the UAE, but also China, much to the alarm of India. His successor, Ibrahim Mohamed Solih, an associate of former president Nasheed, has shifted foreign policy back to being closer to India and the West, including cooperation with Britain in anti-terrorism efforts,[25] while continuing beneficial ties the Arab Gulf states. However, the Maldives has refrained from reinstituting relations with Israel until a two-state solution is mutually arrived at with the Palestinians. In an interview in 2020 with a Maldivian newspaper Foreign Minister Abdulla Shaheed stated the following: “We cannot engage in friendly relations with a country that does not follow international laws.”[26]

The Maldives has been greatly dependent upon revenues from tourism and financial and technical assistance from foreign countries. Greater contact with outside influences and throughout the archipelago have brought both economic benefit and political divisions within society. While Islam has provided some cohesiveness regarding national identity, Maldivian leaders since independence have had to deal with the questions of how Islam should affect society in terms of domestic politics and what should be its impact on foreign policy. Every Maldivian government since Gayoom’s tenure has had to accommodate in some measure the interests of Islamists, but at the same time there were various levels of tolerance allowed, especially with those regarded as “extremists.” While in terms of geopolitics, India and, in recent years, China have become the most actively involved in the region, as a small country with limited resources the Maldives has had to diversify and balance its relationships as best it can.  Ties to the countries of the Middle East, with an affinity through religion, is one avenue in that regard, but, just as with its dealings with other countries including the big powers, the Maldives needs to be protective of its sovereignty and to prevent disruptive outside influences; the former objective is largely ensured though a policy of non-alignment, while for latter objective the course is less certain.

[8] Azra Naseem and Mushfique Mohamed, “The Long Road from Islam to Islamism:  A Short History,” Dhivehi Sitee, May 30, 2014, https://www.dhivehisitee.com/religion/islamism-maldives/.

[14] “Foreign Fighters: An Updated Assessment of the Flow of Foreign Fighters into Syria and Iraq,” The Soufan Group, December 8, 2015, https://www.soufangroup.com/foreign-fighters/.