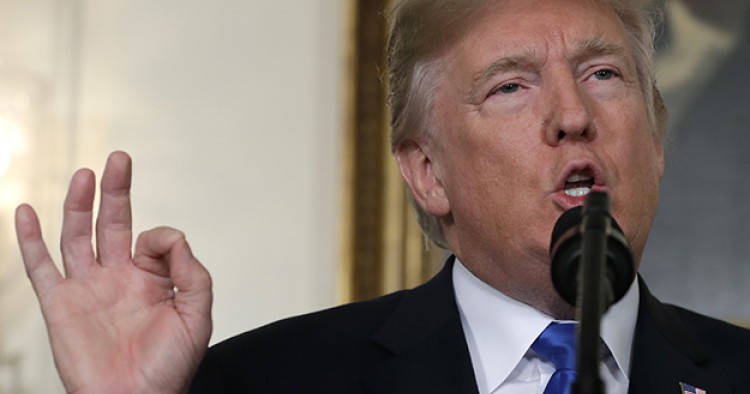 The G.C.C. states will warmly welcome the announcement of a new Iran policy that prioritizes the issues of greatest concern to them: Iran’s ambition to achieve regional domination, interference in the internal affairs of its neighbors, ballistic missile programs, and support for terrorism. The Saudis and Emiratis in particular will want to know now how the Trump administration intends to translate its stated objectives into implementable decisions.  Not seeing Iran’s nuclear weapons program as aimed at them, the Gulf states will not be as concerned with the president’s plan to decertify the JCPOA, especially given that the actual effect of his decision will remain unclear until Congress acts.

The president has often said that it is unwise to telegraph all the ins and outs of U.S. strategy toward an adversary, but there's quite a difference between confidentiality and incoherence. The ‘new strategy’ lists many intentions, but provides no real clarity as to what our ultimate goal is with regard to Iran, and how that fits into our broader Middle East policy. President Trump is treating U.S. policy on Iran almost exclusively from the prism of domestic politics. He won't be the first president to consider domestic politics when formulating national security policy, but Iran is a major foreign policy problem which, if addressed so narrowly and ineffectively, will only get worse and ultimately risk leading us to war.

The ‘new Iran policy’ is long on rhetoric and short on real action or real change. The president decertifies the Iran nuclear deal, but his own policy released by the White House states that “the deal must be strictly enforced.” He kicks the responsibility for managing the deal—and hence a key component of U.S. foreign policy—to Congress. The strategy promises a new ‘balance of power’ in the region, but the main imbalance in the region is not in conventional forces but in Iran’s proxy militia presence in Syria, Iraq, Lebanon and Yemen; the document doesn’t bother to mention how, if at all, the U.S. plans to push back against this asymmetric warfare imbalance. The document promises a “stable” balance of power, but it does not make clear how this “stability” will be achieved. It does not even mention diplomacy as an instrument in America’s foreign policy toolkit.

Decertification without reimposing sanctions will not lead Iran to abandon the agreement. But Trump left the door open for reimposing sanctions in the future if Congress fails to correct the deal's "many flaws." This will then mean the end of the JCPOA. But it is highly questionable that a president who wants to focus on “America first” and professes a dislike for foreign interventions will commit the resources necessary to counter Iran's strategy in the region. If sanctions in the past failed to compel Iran to abandon its winning strategy, this new policy will surely fail to do so. Iranian political and military presence, directly and/or through proxies, is here to stay in Iraq, Syria, Lebanon and Yemen.

Nobody in Tehran believes that Trump walking away from the deal will be the end of the deal. What’s creating more anxiety is Trump’s strategic plan for Iran, and if he decides to go after the I.R.G.C. by designating it a terror organization. While in that scenario, the nuclear deal remains alive in a strict sense, in reality the much-needed foreign investments will be at risk. I.R.G.C. companies play a big part in the Iranian economy and its designation will scare off potential foreign partners for the much needed plans to revive the ailing Iranian economy.