A Message to Vienna: Build a Framework, but Leave the Details to Syrians 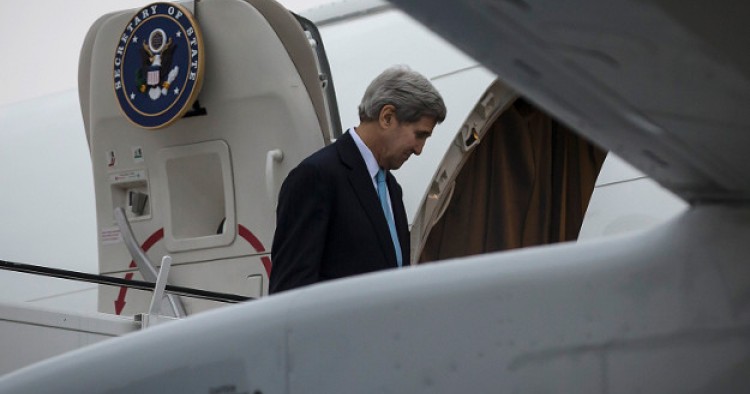 As Secretary of State John Kerry seeks to launch a new peace effort on Syria, he needs to be careful about the goals he sets and the language he uses. Getting the fundamentals wrong at the outset might scuttle the process or could ensure that whatever deal results will crumble under pressure.  It will then lead to more warfare and a worsening of the refugee crisis. Moreover, it would preclude us from securing our strategic goal of mobilizing more Syrians to contain and eventually expel terrorists from Syria. Getting all communities on board is a lesson we should have learned from Iraq 2003; let's not repeat that mistake, no matter what Moscow says.

First, on the security services. Bashar al-Assad has huge personal responsibility for the tragedy that has befallen Syria, but he did not act alone. The grisly photos of thousands of victims of the Military Intelligence Directorate revealed by a defector code-named "Caesar" show the work of a large, ruthless secret police apparatus. Oppositionists before and after the outbreak of the Syrian uprising lived in fear of arrest and murder by that apparatus. As awful as the pictures Caesar brought out are, Syrians I know consistently say that another of the four secret police agencies, Air Force Intelligence, is even more vicious than Military Intelligence. And no part of the fearsome security apparatus wants major change in Syria.

Those who think that just replacing Assad with another figure, even a neutral one, should end the fighting aren't thinking about that security apparatus and the total lack of rule of law to restrain it. Imagine that Assad stays temporarily or even that the top Syrian leadership agreed under international pressure to replace Assad with another figure and that an amnesty for oppositionists was declared. Could Syrian rebels, whether simply civilian or armed, go home again? Would the fighters feel secure enough to leave their families and go off to replenish the depleted reserves of the Syrian Army and fight against terrorist groups without worrying that they or their loved ones would end up like the broken bodies in Caesar's photos? Would most refugees return to a despotic and bankrupt Syria rather than continue toward Europe? No, any transition must include agreement over the fate of the ferocious intelligence agencies.

Reassuring Syrians that they can go home or stay and safely rebuild their country is key. Many friends of the Assad government denounce the idea of foreigners "engineering" political or social change in Syria to provide that reassurance. After the American failures in Iraq, it is reasonable to warn foreigners away from trying to manage the details of a transition. Instead, we should remember the Arabic saying: "the people of Mecca know best regarding its affairs." Syrians must negotiate the details of this transition and whom and what a new government must include.

That negotiation will be exceptionally hard, and the toughest part will be about the extent of change in the "deep state." Holding the security apparatus accountable and ensuring its loyalty to a transition government will require more than removing and replacing the four agencies' chiefs. (Moreover, it is far from certain that Russia or Iran would agree to press for even that relatively small change.) The ill-conceived American measures in Iraq in 2003 that helped collapse the Iraqi state also suggest the answer is not wholesale dismissal of security apparatus officials either, as some in the opposition demand.

Instead, finding an acceptable, durable blend of old and new—of loyalists, oppositionists, and independents—in sensitive slots up to the presidency, will be arduous. No foreign state would be able to find that blend better than Syrian negotiators. Iraqis, divided as they were in 2006 and 2010, managed to negotiate new governments successfully and better than what the American coalition authority and the UN dictated in 2003 and 2004. That is another lesson all our countries should learn from the bitter American experience in Iraq.

Similarly, the refrain that Syria must be “secular” (the charged term ‘ilmani in Arabic) is unhelpful.  It makes more sense for foreign states to demand a “non-sectarian state” or “civil” (in Arabic, madani) state that honors religious and ethnic minority rights.  This has to be a prerequisite to any eventual arrangement that respects majority rule while also accommodating power-sharing.

Syria's future is for Syrians to decide; the country is not under a United Nations trusteeship and its ultimate form of government is legally and properly for Syrians to determine, not Washington, Moscow, or regional capitals.  Nevertheless, Syrians can be held accountable to the 1948 Universal Declaration of Human Rights, which includes freedom of religion and respect of individual human rights, and to which Syria is party.

Russia, mindful of the Syrian Christian community with which it has special ties, reasonably highlights the risks to that ancient community. The murder and suffering of Iraqi Christians, despite provisions in the Iraqi Constitution, must remind all of us of the challenges Muslim extremists pose.  Alawis, Druzes, and Kurds, again reasonably, fear for their community's future if they end up in an Islamist state dominated by jihadis and Salafis.

The art of the political deal, however, is not to insist on ‘secularism’ per se. After all, how secular was Assad’s state given that about 80 percent of the military/security agencies' officers were Alawi when the uprising started in 2011, and given that the current constitution, amended under Bashar, stipulates that the Syrian president must be a Muslim? The Iraqi Constitution envisions a secular state but it could not adequately protect Christians. And few governments have demanded that Egypt change its constitution that, unlike Iraq, still includes an article making the “Principles of Islamic Shariah the principal source of legislation.”

Moreover, from a political standpoint, if we want to mobilize a large majority of Syrian rebels and other young men to beef up the Syrian army against extremists, then the political process itself must be inclusive of all who accept minority rights and the negotiation process.  Syrian negotiators may well draw up some kind of power-sharing arrangement but, as we saw in Iraq, it could well be decentralized and weak. It would make no sense to burden from the outset the new, weak transition government with a confrontation against a large and deeply alienated Islamist bloc.

It would be far more helpful to a sustainable peace agreement to try and pull some Syrian elements out of that bloc by convincing them that they can participate, fairly and safely, in developing decisions about Syria's future. They need to feel that their preference for a future Islamic state—as long as they don’t try to impose it by force--does not disqualify them as Syrians and that they can table their proposals, alongside other political visions, in fair and open discussions with other Syrians. This is how Tunisia's political process has successfully moved forward. It will, of course, be much harder in Syria, where there has been infinitely more bloodshed.

Where outside powers can help overcome these difficulties, perhaps through an international contact group, is by working together to define parameters within which Syrian government loyalists and rebels would negotiate. They could agree on a special representative to shepherd the political negotiation and oversee interim measures on the ground. They can insist that whatever deals the Syrians arrive at be consistent with international charters, conventions and agreements.

But no foreign state should think it can or should try to answer the questions of "who should follow Assad?" or "what should the next Syrian state look like exactly?" One thing all Syrians claim is that Syria is an independent country; we should expect them, and help them, to act like it. Syrian negotiations will be slow and agonizing, but if we learned anything from Iraq it is that this is the only way a durable end to the Syrian conflict can be achieved.