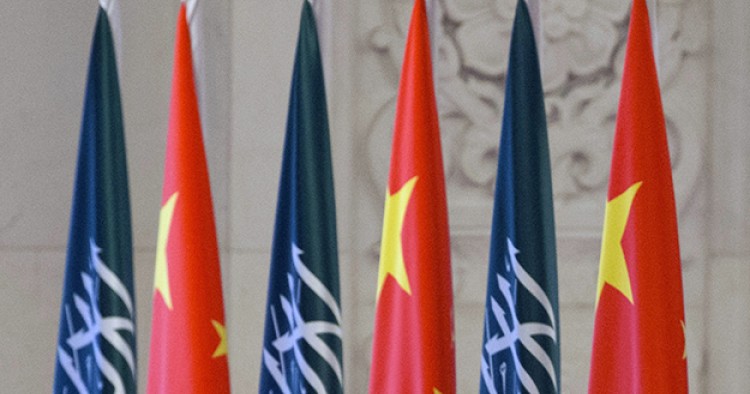 For nearly 600 years, under the imperial tributary system of the Ming and Qing dynasties, foreign “barbarians” travelled to Beijing to kowtow to the emperor in order to trade with China. Reminiscent of those times, President Xi Jinping is recreating a modern version of the ancient imperial system, and it may result in a powerful challenge to U.S. interests in the Middle East and North Africa.

In May, 1,500 delegates from more than 130 nations—including 29 foreign heads of state and more than 200 ministers—met in Beijing for the biannual Belt and Road Forum for International Cooperation. Launched in 2013, the One Belt One Road (OBOR) initiative aims to expand links between Asia, the Middle East, Africa, and Europe by recreating the ancient Silk Road trade routes by land (the Belt) and sea (the Road).

The stated intent is to “promote economic cooperation and connectivity” across these regions through a massive infrastructure development project. This is Xi’s signature foreign policy effort, with the goal of reorienting the global economic order by building what has been dubbed the “project of the century.” And it is the Middle East where the two routes come together for Europe and Africa.

The region holds great appeal for China. With fast growing populations, rising middle classes and increasing wealth accumulation across the Middle East and North Africa (MENA) region, there is an opportunity for Chinese companies to do what they do best—build.

China’s promise of an enormous infrastructure and investment program is understandably appealing for many MENA countries as their economies slow due to falling oil prices or political instability. Pledges related to OBOR may reach as high as a trillion dollars and will encompass more than 60 countries. China is also expanding its cultural and educational exchanges, promoting a people-to-people dialogue, as well as offering to train technical experts from OBOR member countries. It’s not surprising that many MENA countries are embracing China’s vision.

For example, Egypt has coordinated its own domestic economic plan with China’s OBOR priorities. Jordan, the U.A.E., and Saudi Arabia are following suit.

In Egypt, Chinese companies have already pledged close to $20 billion in infrastructure financing, and have been awarded contracts for building major portions of the new capital to be established east of Cairo. The Chinese have listed Egypt as one of the top five destinations for mergers and acquisitions activity under the OBOR initiative. And, on the people-to-people front, tourism from China is up about 215 percent over the past two years.

The U.A.E. has likewise stepped up bilateral ties, creating outposts in China to support Emirati companies and conducting several large trade missions. It will also serve as one of the main transport hubs for OBOR. In preparation, COSCO, China’s largest shipping company, has partnered with Abu Dhabi Ports to build new terminals to support the expected increased flow of commodities along the OBOR routes. The U.A.E. is also a founding partner—unlike the United States, which has yet to join—of the Asian Investment Infrastructure Bank, a multilateral development bank, initiated by China, which aims to support the building of infrastructure in the Asia-Pacific region.

Foreign policy still underpins the China-Saudi Arabia relationship, but economic ties are growing, especially as the Arab country’s economy slows. Energy is the main area of trade, as China is the world’s largest importer and Saudi Arabia the largest exporter of crude oil. In the past 20 years, China’s oil consumption has risen dramatically from 2.9 million barrels per day in 1993 to 11.9 million in 2016.

Earlier this year, Saudi King Salman led a trade mission to China that resulted in more than $65 billion worth of economic and trade deals signed. It is also the Chinese who built, and operate, many of the logistical facilities in Mecca during hajj. Expect to see these ties grow as Saudi aligns its own domestic economic priorities with those of OBOR.

Against the backdrop of these developments, it’s not difficult to see the emerging pattern.

For Xi, OBOR is a central aspect of China’s strategy to expand its reach and influence throughout the MENA region. In large part, his motivation is economic, not political. The Chinese seek control of, or at least access to, the necessary natural resources required to sustain their own economic growth. It is estimated that China’s oil and gas import dependency will reach 67 percent in 2020, and it is MENA countries that will meet that demand. The Gulf Cooperation Council (G.C.C.), Iran, and Iraq now account for 60 percent of China’s imported oil, with China now the second largest oil export market for these countries.

Growing its trade relations with the Arab states is also a top priority for China. Its goal is to double its trade with the region to $600 billion by 2020. It is now the largest trading partner with the region. The Chinese are negotiating a free trade zone with the G.C.C., and have already established one with Egypt. It would not be a surprise to see China pursue one with Iran as well.

While the Chinese government is cautious about taking sides in any regional conflicts, its foreign policy in the region is significantly more active under Xi as a result of the growing trade and economic ties. As China’s ambassador to the U.S. has said, “Chinese foreign policy will inevitably follow its investments.” And we are seeing exactly that.

China’s foreign minister, Wang Yi, has been an active participant in the talks to resolve the Syrian crisis. And after the Iran nuclear deal, Xi was the first major foreign leader to visit the country seeking trade and investment opportunities. As a result of this visit, China’s state owned China National Petroleum Corporation signed a $4.8 billion natural gas development project, of which it will control 30 percent with two other partners. Xi’s visit was balanced with additional stops in Egypt and Saudi Arabia.

During the conflict in Yemen, China sent a naval frigate, an unprecedented move, to rescue stranded Chinese workers. China has also now established a military outpost in Djibouti, and we can expect to see additional military ties—and military sales—made throughout the MENA region.

So what does this mean for the United States? Under the Obama administration, officials were leery of Beijing’s efforts to use its economic might to build ties with much of Asia, Africa and the Middle East. But there was no stopping China, especially as the United States is not a significant funder of infrastructure projects.

Under the Trump administration, there is new recognition that the United States should pay attention to what is happening under the umbrella of the OBOR initiative. In a policy reversal following the Mar-a-Lago Summit between Presidents Trump and Xi, the administration sent a National Security Council senior director to attend the Belt and Road Forum in Beijing at the last minute. While not sending a representative at head of state or even ministerial level, the gesture was nevertheless in recognition of the OBOR’s potential to change the dynamics in the region. And it was essential if American companies want to have any chance of receiving contracts under the new initiative.

The reality is that China has something that America is not able to offer to these countries but is much needed—infrastructure financing combined with a large export market. And all with limited strings attached.

Even if all of OBOR does not fully come to pass, the initiative has positioned China in direct competition with the United States for economic influence in key countries around the world. While America remains the political powerhouse in the MENA region, for now, it is important to watch how China’s OBOR initiative impacts U.S. interests. If it is up to Xi, the building of China’s new Silk Road will reshape the economic balance throughout Asia, the Middle East, North Africa and Europe, with China being the winner.