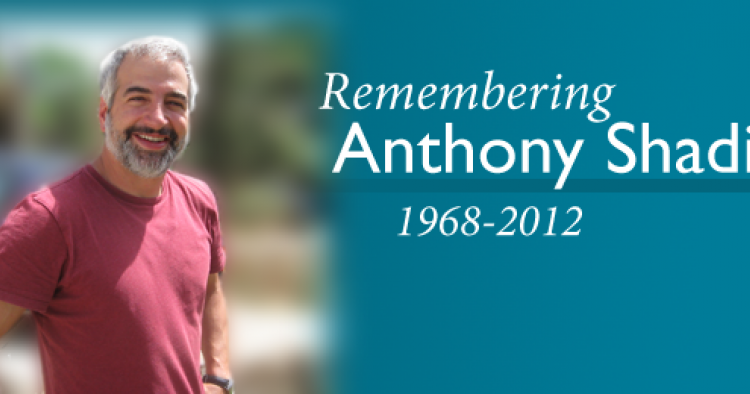 The Middle East Institute is deeply saddened by the untimely death of Anthony Shadid, the Pulitzer Prize-winning journalist who covered the Middle East for the Boston Globe, Washington Post, and most recently the New York Times. Shadid died of an apparent asthma attack while on assignment in Syria. His insightful, humane reporting on the Middle East painted an uncommonly nuanced portrait of a region and people in turmoil, and will be sorely missed. Shadid's death is a terrible loss for journalism and the Middle East community. Our sincerest condolences go out to his family, friends, and colleagues. Below are remembrances of Anthony Shadid from members of the MEI community:

"Anthony Shadid had the respect of the whole community of experts on the Middle East from academia, government, think tanks and activists. I first met Tony when I was Vice President of the Middle East Institute, and he was reporting for the Boston Globe. His deep knowledge of the area's history and culture came with an empathy for the diverse people of the Middle East and North Africa. Tony was also a careful listener, who got close to his sources and drew out their passion and thoughts. In his reporting and books, he allowed them to speak to the reader. By giving a voice to millions who often did not have that freedom in their own countries, Anthony Shadid gave depth and texture to American understanding of human beings in the midst of turmoil." - Amb. David Mack in a letter to the Washington Post, 2/17/12

"I’ve known Anthony since he was a college student; our lives and careers crossed paths many times, including in Beirut where we both settled as journalists. We talked often about the need to combat American misperceptions and stereotypes of Arabs and how the barrage of negative media images perverted American understanding of the region. Anthony’s compassionate and sensitive writing about the Arab world was driven by a desire to convey the humanity and aspirations of the Arabs he knew so well. He did much in his short lifetime to reveal to his American readers that the citizens of the Arab world, like us, craved dignity, freedom and democracy. He was willing to take risks and die in the effort to tell that very important story. He will be deeply missed." - Kate Seelye