The Middle East summit in Warsaw: Dead on arrival? 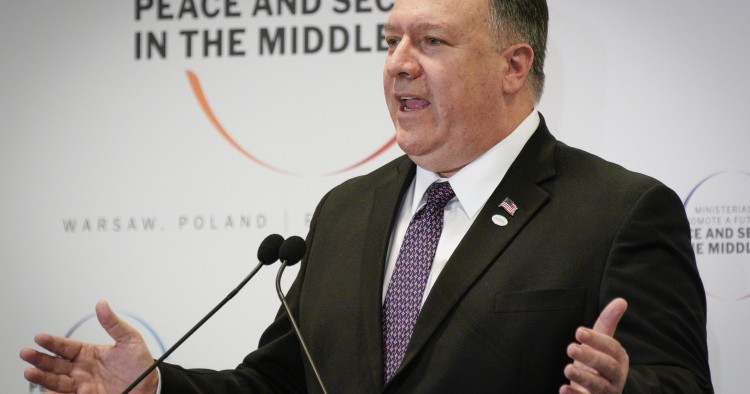 When is a peace summit not a peace summit? When it excludes many of the major parties to the conflict, the countries that do attend spend most of their time criticizing those that weren’t invited, and the end result is to make things worse rather than better. The Middle East summit held in Warsaw on Feb. 13-14 was billed as an international forum to peacefully settle regional disputes, but long before it even started the gathering was widely perceived as anti-Iranian. While the Warsaw talks are better than continued violence, they remain problematic. Given that some key players in the region were excluded and others chose not to attend, the summit was unlikely to yield real results.

To gain insights on the Warsaw conference, we should look to a successful predecessor: the Helsinki process and the resulting 1975 Helsinki Accords. Through negotiations, this process achieved a significant reduction in tensions between the Soviet and Western blocs – a feat that was unimaginable only 10 years earlier. However, this success was largely due to the fact that Western countries were invited to take part by the Soviets. By comparison, the Middle East summit in Warsaw deliberately excluded Iran, a major regional actor that is involved in many of the Middle East’s flashpoints, like Syria, Lebanon, and Yemen. Besides being antithetical to brokering a durable settlement, excluding Iran does not align with other recent actions by the Trump administration. Even as it negotiates the future of Afghanistan with the Taliban, which once gave shelter to al-Qaeda members responsible for the 9/11 attacks, the administration refuses to meet Iran’s representatives in a third country, like Poland. While Tel Aviv and other U.S. allies in the region would have no doubt protested the inclusion of Iran, Washington could have insisted on it and imposed its political will on its Middle Eastern allies if it so desired. In order to assure lasting results and assert U.S. leadership in the region, President Donald Trump and Secretary of State Mike Pompeo should have made an effort to include Iran.

In the 1970s Western leaders were ready to meet their Eastern counterparts despite being at odds over the war in Vietnam and other issues. Secretary Pompeo, however, did not follow this example by inviting his Iranian counterpart, Javad Zarif, to join the talks, despite the strong potential that such a move could have served U.S. interests in the region. If Zarif accepted, Washington would have had the opportunity to publicly juxtapose its vision of the Middle Eastern order with that of the Iranians. Furthermore, had Zarif refused, President Trump’s position would only have been strengthened. Washington could easily have shifted the blame to Tehran for the failure of the talks and any resulting regional impact. Instead, the lack of an invitation not only offended, but also provoked the Iranian side. As a result, the summit produced nothing like a comprehensive peace plan for the Middle East. In fact, the U.S. initiative may well have fueled regional tensions and strengthened Iran’s resolve to continue to project power across the Middle East. Excluding Iran from international events like this also threatens to push Tehran even closer to Moscow and Ankara. In fact, representatives of the three states met in the Russian city of Sochi to discuss Syria as the summit in Warsaw was going on. While the Iran-Russia-Turkey bloc may not have the power to achieve a decisive victory in the region, it can certainly stymie future peace initiatives.

The Warsaw summit may also have serious implications for the European Union and EU-U.S. relations. Poland agreed to host the U.S.-spearheaded summit not out of a desire to get involved in the Middle East, but rather to strengthen its alliance with the U.S. and improve its position in the EU vis-à-vis Germany and France. However, Poland seems not to have gotten much out of it; most European allies were cool to the idea of the summit and their participation was limited. As Berlin and Paris have made clear, they do not accept current U.S. policy toward Syria and Iran, and are disappointed by and disapprove of Warsaw’s actions. As such, the summit has become yet another example of the E.U.’s lack of unity on foreign policy.

The U.S. and Poland recommended a follow-up summit to continue talks on regional security issues. Perhaps next time they will include Iran, Turkey, and Russia. While the Warsaw summit may have resulted in diplomatic declarations and the announcement of plans, it was also detached from reality. Instead of achieving its objectives, it likely served to cement rivalries, raise tensions, and increase the likelihood of conflict. When it comes to planning the next Middle East summit, the U.S. would do well to look to the Helsinki process as an example.