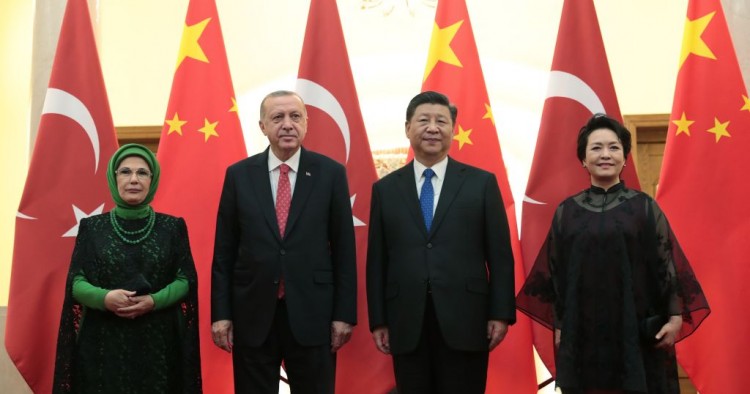 As part of Beijing’s broader strategy of seeking out new markets and cultivating strategic partnerships with countries beyond its backyard, China has been seeking to expand its economic and political ties with Black Sea states. While Beijing’s involvement in the region is still at a nascent stage, it has already prompted fears that its economic engagement masks a political agenda that could hurt Western interests. Critics accuse Beijing of “debt-trap diplomacy” whereby China lures developing or underdeveloped countries into borrowing money for infrastructure projects they cannot afford with the aim of extracting economic or political concessions when the country fails to pay off its loans on time. Some Black Sea countries that have prioritized ties with the EU have been cautious about engaging with Beijing, but Turkey, a key regional state and EU candidate country, has actively sought to build closer ties with China.

Economic cooperation has been the backbone of ties between Turkey and China, but efforts on both sides to broaden the relationship — at a time when Ankara’s relations with the West are badly strained — have raised eyebrows in Western circles. Turkish President Recep Tayyip Erdogan’s statement in 2016 that Turkey should not be fixated on joining the EU and could instead seek membership in the Shanghai Cooperation Organization (SCO), of which China is a member, as well as Turkey’s recently launched “Asia Anew” initiative, which aims to develop closer ties with Asia, have fed Western concerns. But fears of a Turkish shift toward China at the expense of the West are overblown. Relations are mainly driven by joint economic interests, not political ones, and even on the economic front, the partnership is far less tight than is often touted.

From trade to the BRI and Middle Corridor

Commercial relations between Turkey and China began during the Cold War years and took off in the 2000s. Bilateral trade expanded from around $1 billion in 2000 to $23 billion in 2018, making China Turkey's third-largest trading partner. But Turkey has a massive trade deficit with China, accounting for one-third of its total foreign trade deficit of $55.1 billion, and is quite uncomfortable with the imbalance.

Since the launch of the Belt and Road Initiative (BRI) in 2013, one of Chinese President Xi Jinping’s signature policy initiatives, efforts to deepen economic ties have intensified. Touted as one of the largest infrastructure and investment projects in history, the BRI was announced as an “economic development initiative that would create new trade corridors across Asia, Europe, and Africa.” With its location at the crossroads of the Middle East, south Caucasus, eastern Mediterranean, and Europe, Turkey occupies an important place in the BRI, and China has already started investing in big-ticket infrastructure projects. It purchased Turkey’s third-largest container terminal, Kumport, and is interested in several other Turkish ports. A Chinese consortium bought Istanbul’s third Bosphorus bridge and Chinese banks are in discussions to refinance billions of dollars of loans for the operation of Istanbul’s new airport.

Turkey sees the BRI as complementary to its own “Middle Corridor” initiative to launch a rail and road network running from Turkey through the Caucasus and Central Asia to China, and the two countries agreed to integrate it into the BRI. Progress has been made to develop the Middle Corridor, but experts are skeptical about the much-touted economic benefits of the BRI and the feasibility of the Middle Corridor. The BRI remains quite vague, without formal agreements, protocols, institutions, or a clear timeline. It has become a catch-all term for everything China does abroad, raising doubts about what it is and what it will mean for its partners.

Optimists are hopeful that China’s financial footprint in Turkey will grow after the coronavirus outbreak. Turkey’s Sovereign Wealth Fund signed a $5 billion agreement in March with the China Export Credit Insurance Corporation, Sinosure. According to the deal, Sinosure would provide financing to Chinese enterprises involved in projects in Turkey’s energy, petrochemicals, and mining sectors, prompting fears that Chinese firms will be “taking much bigger stakes in Turkish companies struggling to cope with the fallout from the pandemic.” In another sign of deepening ties, a recent statement by the Asian Infrastructure Investment Bank, a regionally focused multilateral development bank, said Turkey has “submitted a request for a 500-million-dollar credit line for two of its development banks to help alleviate working capital shortages and liquidity constraints as a result of the pandemic.”

Critics have voiced concerns that the Turkey-China economic partnership could expand into other areas as well. There are worries that Turkey’s strained ties with the U.S. due to its purchase of Russia’s S-400 missile defense system and the subsequent U.S. decision to kick Turkey out of the F-35 fighter jet program could lead to a closer defense partnership between Ankara and Beijing. The fallout from the S-400 and the F-35 has indeed dealt a blow to Turkey’s ability to import key subsystems it needs for its products, leading Ankara to seek new partners as it works to expand its defense industrial base. The two countries already share a history of defense cooperation. Turkey’s Roketsan produced the Yildirim missile based on the Chinese B-611 missile under license. In 2013, Turkey awarded a Chinese defense company a $4 billion contract to help develop a long-range air and missile defense system. Ankara later abandoned the decision, but the incident sowed the seeds of distrust between Turkey and its NATO allies.

China is also trying to expand its cultural influence in Turkey. The number of tourists, Confucius Institutes, university Chinese language departments, and business associations are all on the rise. The China State Council Information Office launched an initiative to donate thousands of books disseminating Chinese culture and philosophy to think tanks, cultural institutions, and universities around the world, including Turkey. The two countries also began hosting “Year of China” and “Year of Turkey” events featuring Chinese intellectuals, folklore, and music.

Despite growing ties, however, Turkey and China are nowhere near forming a strategic alliance. Turkey has significantly dialed down its criticism of the Chinese crackdown of the Uighur minority in Xinjiang province, which share a common linguistic and religious heritage with Turkey, but the sizable Uyghur diaspora in Turkey continues to fuel China’s mistrust of Turkey. The EU and U.S. account for a large percentage of Turkey’s imports and exports and the West remains its main source of foreign direct investment (FDI). By contrast, China accounts for around 1 percent of FDI inflows into the country. Despite tensions over the S-400 and F-35, Turkey remains an important part of the Western security framework. Strained ties with the West have indeed contributed to closer relations with Beijing as Ankara has sought to diversify its foreign policy, but ultimately Turkish policy-makers see Turkey-China relations as a compliment to, not a substitute for, the country’s Western alliance.

Gönül Tol is the Director of MEI's Turkey Program and a senior fellow for the Frontier Europe Initiative.