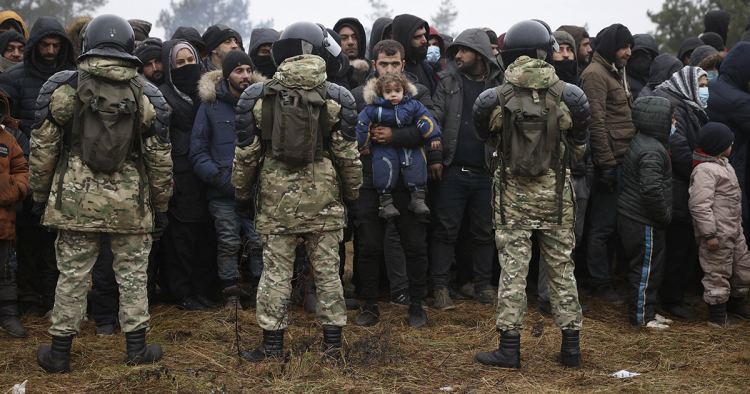 The migration crisis on the eastern border of the European Union (EU), which began earlier this summer and has ramped up dramatically in recent months, came as a surprise not only to the border countries, such as Lithuania, Latvia, and Poland, but also to top EU leaders. After the European migration crisis of 2015, EU politicians became used to the influx of migrants from countries in the Middle East and North Africa (MENA) and Sub-Saharan Africa travelling through Mediterranean routes and Turkey. When it seemed as though mechanisms to prevent migration flows and control the main transit routes had been developed, a new crisis emerged in the last place anyone would have expected: Belarus. What gave rise to this crisis and what does it mean for the migrants who are desperately trying to enter the EU from Belarus as well as the countries facing a sharp rise in uncontrolled migration?

How did this come about?

Migrants from MENA countries, mainly Iraq and Syria, started coming to Belarus in July. Initially, they attempted to cross over into Latvia and Lithuania, causing the biggest migration crisis in the history of these Baltic states. In August, when their borders were secured, the migrants’ focus shifted to the Belarus-Poland border. The migrants often testify that they have been encouraged or forced to move into neighboring countries by Belarusian officers. According to the Polish Ministry of Foreign Affairs, so far over 32,000 people have tried to cross the border illegally this year. In response, the Polish parliament declared a state of emergency in the area bordering Belarus, to stop illegal crossings and to deploy additional troops there. These actions also prevented volunteers from assisting people who were stranded by the border fence and reporters from covering the issue. When migrants tried to return to villages or towns in Belarus, they were pushed into the forest, leaving them trapped in the woods and resulting in a humanitarian crisis. This prompted Western members of the U.N. Security Council to condemn the actions of Belarus.

EU leaders and member states' representatives have no illusions about who is responsible for the suffering of thousands of migrants; they blame Belarusian President Alexander Lukashenko and the Russian authorities. European Council President Charles Michel visited Poland on Nov. 10 to show solidarity with the Polish authorities, decrying the crisis as an attack organized by the Belarusian leader and warning about the imposition of new sanctions. President of the European Commission Ursula von der Leyen also discussed the issue with President Joe Biden during her recent visit to Washington. She warned that the EU could sanction airlines that facilitate human trafficking from the Middle East to Belarus.

On Nov. 15, the Council of the EU amended “its sanctions regime in view of the situation at the EU’s border with Belarus, so as to be able to respond to the instrumentalization of human beings carried out by the Belarus regime for political purposes” and moved to impose new sanctions on the Lukashenko government. This firm stance has been supported by other EU leaders and U.S. officials because the migration crisis has a clear geopolitical dimension, reflecting the growing tensions between NATO and Russia. In response to criticism and threats by the EU, Lukashenko has said that he would block a pipeline that carries natural gas from Russia to Europe. On Nov. 15, NATO Secretary-General Jens Stoltenberg warned Moscow against ”potential aggressive actions” amid reports of a Russian troop buildup on the Ukrainian border and the deployment of special forces to Belarus.

There is considerable evidence to suggest that the ongoing standoff was triggered intentionally for political reasons. There was no spontaneous movement of migrants from MENA countries to Belarus; rather, this shift has been driven by the Belarusian government, which reportedly began offering easy tourist visas and encouraging migrants to travel to the country. Lukashenko seems to be deliberately causing this crisis in a bid to force the EU to make concessions, like rolling back previous sanctions, and perhaps even to secure a new source of income in the form of financial aid from the bloc. Lukashenko is probably counting on financial assistance similar to what Turkey has received from the EU since the 2015 European migration crisis to stop the wave of migrants from the Middle East and provide support for those that remain in Turkey. Such an idea was even openly floated by Russian Foreign Minister Sergey Lavrov. To gain leverage with the EU, Lukashenko has used thousands of Middle Eastern migrants to destabilize the situation in Central Eastern Europe.

The question arises whether the EU’s eastern border will become a permanent destination for migrants or whether this route will lose importance as quickly as it has gained it. There are many indications that a compromise between the EU and the Belarusian authorities will lead to its closure, and there are already some signs of an easing of pressure on the border. Belarus is located far from MENA and getting there by land is very difficult. Thus, the control of civil air traffic from the countries of the region to Belarus would allow almost total control over migratory movements. In fact, Iraq, the United Arab Emirates, Turkey, and Lebanon have all pledged their cooperation with the EU in this regard. After consultations with top EU officials, Iraqi Airlines suspended flights to Minsk and Turkish Airlines stopped selling one-way tickets to Belarus. On Nov. 14, fearing a ban on flights to the EU, the Belarusian airline Belavia suspended the sale of tickets to Afghan, Syrian, Yemeni, and Iraqi citizens traveling from Dubai.

At this point, the biggest challenge for the EU is how to prevent a major humanitarian crisis involving thousands of migrants, many from the MENA region. The cynical calculations of the Belarusian president have led to human suffering on a large scale. Yet EU leaders should consider how to avoid similar situations in the future. Entry procedures should be refined to more effectively distinguish between economic migrants and those eligible for refugee status. The EU should also develop ways of supporting MENA countries to address the root causes of migration, and not only focus on its effects. Systemic solutions and economic aid for the MENA region are essential.

Travels beyond Gurnah: Migration in the work of Ali Al-Sharji and Shaima Al-Tamimi