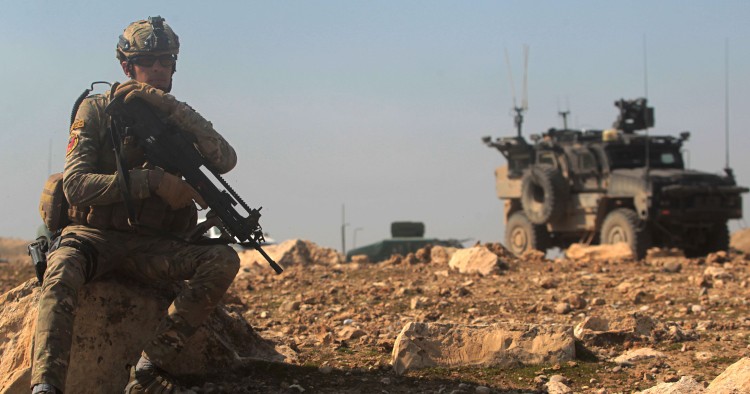 In this week's Monday Briefing, MEI experts Randa Slim, Paul Salem, Ahmad Majidyar, and Marvin G. Weinbaum provide analysis on recent and upcoming events including President Trump's comment about keeping U.S. troops in Iraq "to be able to watch Iran," Pope Francis's trip to the UAE, the EU's maneuvers to defy U.S. sanctions on Iran, and intra-Afghan talks in Moscow.

Iraq: Stuck in the middle again

In a Feb. 3 interview, President Donald Trump said he wanted to keep U.S. forces in Iraq “to be able to watch Iran.” This is Baghdad’s worst-case scenario. Since 2003, successive Iraqi prime ministers have sought positive relations with both the United States and Iran, tried to maintain some distance from each, and worked to avoid getting entangled in the U.S.-Iran rivalry. Mohammed Al-Halbousi, speaker of the Council of Representatives, said recently that “Iraq wants to be a meeting point for all.”

U.S. Iran sanctions policy is already testing Baghdad’s ability to strike a centrist position between the two rivals given the extensive economic and cultural links built between Iraq and Iran since 2003. Having already received two sanctions waivers to enable it to buy electricity imports from Iran and with the second waiver set to expire in March, Iraq is now hard pressed to come up with an alternative source of energy at a time when summer is approaching and power cuts are expected. The 2018 summer protests suggest that if faced with the same power outages, Iraqis will not only quickly lose faith in Prime Minister Adel Abdul-Mahdi’s government, they will also question the legitimacy of the whole post-2003 political system.

President Trump’s comments help build the case being made by a parliamentary coalition including cleric Muqtada al-Sadr’s bloc and the pro-Iran Construction Bloc led by Hadi Al-Amiri to expel U.S. forces from Iraq. Senior Iraqi officials including the prime minister have insisted that Iraqi security forces still need training and support from the U.S. to fight ISIS remnants at a time when the political and socio-economic conditions in Iraq that gave rise to ISIS remain in place.
@rmslim

The pope in Arabia

Pope Francis is on a historic trip to the UAE. It is the first visit by a pope to the Arabian Peninsula, the birthplace of Islam. It follows visits by Francis to Egypt, Turkey, Lebanon, Palestine, and Israel, and comes ahead of a planned trip to Morocco in March. Pope Paul VI in 1964 was the first pope to ever visit the Middle East — i.e. since the birth of Christianity! Popes John Paul II and Benedict XVI made numerous visits to the region, although the latter raised tensions with the Muslim world over controversial remarks in a 2006 speech.

These high-level visits play an important symbolic role in both the West and the Middle East in fighting stereotypes and encouraging understanding and tolerance. This is especially important now as conditions for Christians in the Middle East and Muslims in the West have been on downward trajectories. The Christian communities of Iraq were devastated by the aftereffects of the U.S.-led invasion of Iraq, Christians in Syria suffered heavily in areas taken over by ISIS and other radical Islamist groups; and Copts in Egypt have been increasingly targeted. Right-wing nationalism in the U.S. and Europe has had strong anti-Muslim overtones; and these divisions have been exploited by ISIS terror attacks, particularly in Europe.

The pope’s visit to the UAE is an important milestone in the long work of undoing centuries of mutual misunderstanding and hostility. Interestingly, it comes at a time when the region’s events are driven not so much by Christian-Muslim conflict, but rather by conflicts within the Muslim world, mainly between Shi’i and Sunni powers and armed groups (a grand Sunni-Shi’i reconciliation would do wonders for the region!), but also within the Sunni “world” itself. And the region still grapples with unresolved reconciliation between Jews, Muslims, and Christians around Jerusalem and the issue of Palestine.

God’s name has been invoked and abused too frequently in the region’s wars and conflicts; it is important that religious and political leaders bring out the messages of peace, tolerance, and common humanity that exist in all the Abrahamic religions, and lean on these aspects to resolve conflicts, not escalate them, and improve conditions for members of all communities not only in the region, but also in the West as well.
@paul_salem

After months of difficult negotiations, Germany, Britain, and France – three signatories of the Iran nuclear deal – have established a E.U.-backed payment mechanism to circumvent U.S. sanctions and facilitate “legitimate trade” between European businesses and Iran. The effort is aimed at incentivizing Tehran to stay in the accord in the wake of the U.S. exit and re-imposition of sanctions on Iran.

But while the new system – dubbed the Instrument in Support of Trade Exchanges (INSTEX) – signifies the European powers’ political support for the nuclear deal in defiance of Washington, its viability and effectiveness remain in question. The mechanism will initially be used only for medicine and food items and will not cover oil transactions; therefore, it will have limited economic benefits for Iran. Broadening the scope of the system to satisfy Tehran will be a challenging task. China and Russia – two other signatories of the nuclear deal – are not part of the INSTEX, although they may seek to use the system in the future.
Most importantly, major European companies and banks are unlikely to risk their access to the U.S. financial system by doing business with Iran through the INSTEX. Reacting to the INSTEX announcement, the U.S. State Department warned of “severe consequences” of breaching U.S. sanctions.

Iran’s domestic politics could prove to be another hurdle. The INSTEX’s implementation requires Iran to meet international standards “with regards to anti-money laundering, combating the financing of terrorism (AML/CFT), and EU and UN sanctions compliance.” This requirement will face opposition in Tehran as hardliners and military officials see European demands, including the signing and implementation of the Financial Action Task Force (FATF), as a plot to “infiltrate Iran’s financial and banking information.” The Islamic Revolutionary Guards Corps., in particular, is concerned that the FATF would restrict its activities at home and abroad.
@majidyar

After weeks of sustained U.S. diplomacy and several days of intense discussions with Taliban representatives devoted to advancing an Afghan peace settlement, Russia seems bent on sidelining the American efforts. In meetings in Doha, U.S. peace envoy Zalmay Khalilzad managed to reach a framework agreement on the principles for what may be either the first step in a process to end the Afghan conflict or a fig leaf to give cover to a U.S. exit. Either way, until now serious attempts to reach a negotiated peace accord have been an American initiative that has left the Kabul government an anxious onlooker. That exclusion continues in Moscow this week as members of President Ashraf Ghani’s government are absent from a Russian-blessed conference on reconciliation conspicuous for the presence of a large delegation of prominent figures from the political opposition.

The Moscow meeting provides a further opportunity for the Taliban to earn a stamp of international legitimacy and try to marginalize the Kabul government’s role in any new disposition of power. For its part, Russia sees an opportunity to pursue its broader strategy aimed at asserting itself politically in areas such as Afghanistan and Pakistan where the U.S. may be losing interest and influence. Afghan politicians in Moscow, in a delegation headed notably by former President Hamid Karzai, are using the conference as a way to politically diminish Ashraf Ghani and his regime before the scheduled July presidential election. While the Moscow meeting may be significant for promoting an intra-Afghan peace dialogue, it is unlikely to break new ground. The calculating politicians may agree to a more Islamic-friendly Afghan state, but they never willingly approve of a political system the Taliban might one day dominate.
@mgweinbaum