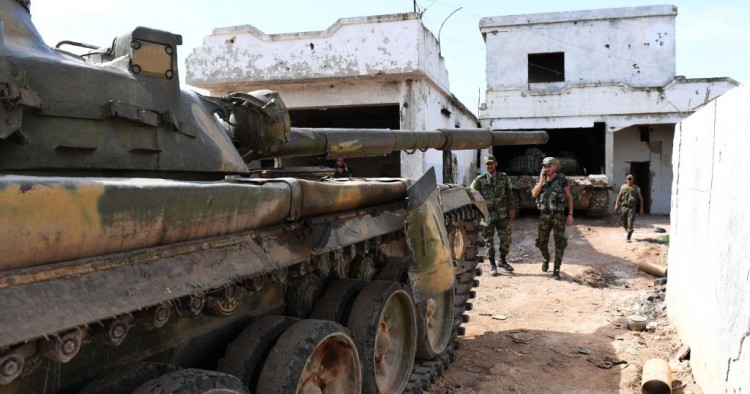 In this week's Monday Briefing, MEI experts Charles Lister, Paul Salem, and Mirette F. Mabrouk provide analysis on recent and upcoming events including military developments in Syria's northwest, the confirmation of David Schenker as Assistant Secretary of State for Near Eastern Affairs, and the approval of amendments to laws regulating Egypt's judiciary.

Regime offensive in Syria’s northwest grinds to a halt

Six weeks ago, the Syrian regime launched major offensive operations against the last remaining “de-escalation zone,” in the northwest of the country. Backed by Russian airpower but lacking Iranian ground support, the offensive has since focused on two strategically vital fronts: Northern Hama and northeastern Latakia, around the village of Kbana.

In its early phase, pro-regime fighters secured a series of important victories in northern Hama, notably capturing the towns of Kafr Nabudah and Qalaat al-Mudiq. That success has since fizzled out. On the Kbana front, pro-regime forces have failed to advance altogether, being routed on an almost daily basis. Today in sum, the regime has recaptured approximately one percent of Syria’s northwest zone, but lost almost the same. Presumably aware of its shortcomings, the Syrian-Russian alliance has since shifted to a strategy of collective punishment: A massive escalation of aerial and artillery bombardment across the northwest. At least 326,000 people have since been displaced and 420 civilians killed.

In recent days, opposition and jihadist fighters have launched a series of offensives in northern Hama, which for a time secured as much territory as the regime had in six weeks. Those efforts have been clearly emboldened by Turkish assistance — in the form of artillery rockets, heavy mortars, anti-tank missiles, and armored vehicles, as well as Turkish-trained forces dispatched from northern Aleppo.

Although the regime may have the capacity to escalate further, the challenge presented in northwestern Syria has clearly been greater than expected. For Russia, the miserable performance of Syria’s military augurs poorly for its long-term potential to “restore sovereignty.”

On behalf of the Middle East Institute, I’d like to congratulate our friend and WINEP colleague David Schenker for his confirmation as Assistant Secretary of State for Near Eastern Affairs. David brings great intelligence and expertise to the job, and a particular empathy for the people and societies of the region.

He will face numerous policy challenges, of which I would highlight four.

First, the most important of these might be regarding the crisis with Iran. The challenge will be to work to avert a sudden escalation into armed conflict between Iran and the U.S. throughout the coming year, while at the same time exploring avenues of communication and negotiation that might become very relevant after the U.S. presidential elections in November 2020. Whether Donald Trump is reelected, or a Democratic president is installed, in both cases there could be a window of opportunity for serious talks with Tehran.

Second, de-escalating civil wars. The civil wars in Yemen, Syria, and Libya have profoundly different dynamics, but all have a tremendous impact on creating human suffering, fueling refugee flows, enabling terrorist groups, and escalating regional proxy war. All of these conflicts have both internal and external drivers. David should look to use what influence and leverage the U.S. has to try to bring the Yemeni and Libyan civil wars to an end, and to continue to press for some form of inclusive political settlement in Syria.

Third, David takes office as two major Arab countries, Sudan and Algeria, are in the throes of popular demands for democratic change. David should use the influence of his office, as his colleagues David Hale and David Satterfield have done in several cases, to push back on authoritarian trends and encourage democratic options.

Fourth, David takes office as the Trump administration has abandoned any semblance of fairness or respect for international law as relates to the Israel-Palestine conflict. He is unlikely to be able to influence the so-called “Deal of the Century” if and when it’s announced, or the potential wave of annexations by Israel of large parts of the West Bank. But he and his colleagues will have their hands full trying to figure out how to handle a situation in which neither a two-state solution nor a one-state solution is possible any longer.

On June 9th, Egypt’s House of Representatives, or parliament, approved amendments to six laws aimed at regulating the performance of a number of judicial authorities: The Supreme Constitutional Court (law 48/1979), the State Cases Authority (law 57/1963), the Military Justice (law 25/1966), the Administrative Prosecution Authority (law 117/1958), the Judicial Authority (law 46/1972), and the State Council (law 47/1972). These amendments had been previously approved by the Constitutional Affairs Committee on May 22nd, and they were designed to change existing laws to conform to the constitutional amendments approved, by referendum, on April 23rd.

The changes are significant, particularly with regard to the judiciary. In the case of the Supreme Constitutional Court, the president will now be able to appoint the court’s chairman, selecting from among its deputies. He also gets to name the court’s commissioners, based on a recommendation from its chairman and “according to the will of the general assembly.”

As the deputy head of the Legislative and Constitutional Affairs Committee, Ahmed el-Sherif, was quick to point out, “This does not violate the independence of the court or infringe upon its powers. It gives the president a symbolic right: To name the head of this judicial authority based on nominations by members and the general assembly.” He failed to clarify why the constitution had to be amended to achieve a “symbolic” right.

He also noted the amendments to the State Council “settling administrative disputes, disciplinary cases and appeals, revising draft laws and decrees” — although it would not be able to review contracts in which the state, or any of its subsidiaries, were parties.

In addition to the amendments to existing bodies, a Higher Council for Judicial Authorities will be set up, to dictate the terms of judicial appointments, promotions, and delegates, and headed by the president.

The changes, which will throttle the independence of the judiciary, are a continuation of an attempt to control judicial power that started in 2017. They are likely in response to the executive branch fearing judicial influence over national security matters, following a set of rulings unfavorable to the government, among them those on the Tiran and Sanafir islands and the nullification of death sentences pending investigations.