Monday Briefing: Troubled paths ahead for US and Iran 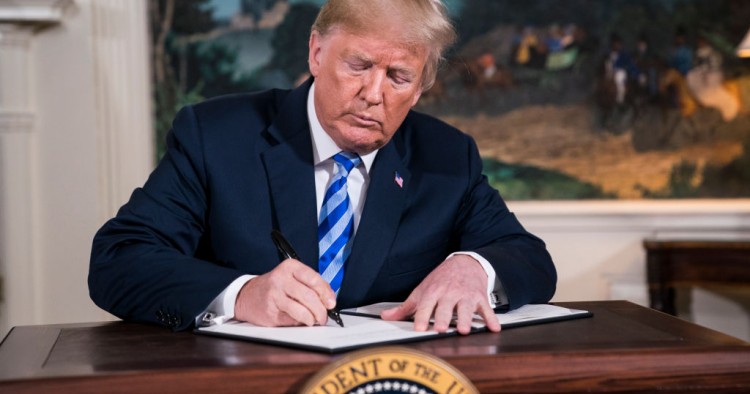 In this week's Monday Briefing, MEI experts Paul Salem, Randa Slim, and Marvin G. Weinbaum provide analysis on recent and upcoming events including the anniversary of the US withdrawal from the Iran nuclear deal, the economic crisis in Lebanon, and ongoing peace talks in Afghanistan.

US and Iran: Troubled paths ahead

Wednesday marks the first anniversary of the Trump administration’s withdrawal from the 2015 nuclear deal with Iran. Renewed — as well as new — sanctions have hit the Iranian economy and the government’s finances. What are the main scenarios for the near future?

Although President Donald Trump argues that the “maximum pressure” campaign aims to get Iran back to the table, there is little likelihood of any negotiations between now and November 2020. In this period, Iran will be under economic strain and will have less resources to finance its proxies in the region, but it will also look for ways to inflict a cost on the U.S. This could be in the form of escalated attacks by proxies on U.S. partners in the region, such as Israel, Saudi Arabia, the UAE or Bahrain, or attacks on U.S. forces in Iraq or Syria. It could also take the form of proxy attacks in the Gulf or Red Sea with the hope of raising insurance costs on energy and other shipping. This heightened tension could trigger escalation into an unintended war.

A key question will emerge after the November 2020 elections. If Trump is reelected, Tehran would be faced with difficult choices. There is so little trust and common ground between the two leaderships at this point, it is very hard to imagine a turn toward negotiation; although a return to negotiation can’t be ruled out, and certainly should be encouraged. Alternatively, Iran could hunker down for four more years of relative isolation, and continue to use its proxies — even if underfunded — to inflict pain. It could also consider a withdrawal from the Joint Comprehensive Plan of Action (JCPOA) and the Nuclear Non-Proliferation Treaty (NPT), and move toward a nuclear weapon. The cases of North Korea and Libya provide the dangerous lesson that the U.S. treats states with nuclear weapons with greater caution and respect.

Many 2020 Democratic presidential candidates have announced that they would return the U.S. to the nuclear deal if elected. But a quick lifting of sanctions will not be politically easy in the U.S., and a simple return to the JCPOA will not by itself resolve the many outstanding issues with Iran. A possible way forward would be to link a U.S. return to the JCPOA to a commitment to negotiate a further and broader deal that would include longer nuclear deadlines, as well as agreements on limiting Iran’s ballistic missile program and curtailing its intervention — directly and through militia proxies — in the region. Such a deal would require significant commitments from both the U.S. and its partners. But if successful, it should be anchored in a treaty that would outlast one administration, and should be designed to create a pathway for a more stable Middle East.

With a national debt of about 150% of GDP, Lebanon is facing its worst economic crisis since the Taif Accords ended the country’s 15-year civil war in 1989. The crisis, which is the long-overdue result of years of rent-seeking policies, economic mismanagement, and corruption, presents Lebanon’s political class with one of its most acute challenges yet. Last year, the international donor community pledged nearly $11 billion in loans conditional on the Lebanese government enacting economic reforms including revamping its inefficient electricity sector, which runs an annual deficit of around $1.5-2.0 billion.

The Lebanese government is in the process of finalizing an austerity budget, and according to the finance minister, it will include wide reductions in spending. Leaked information and trial balloons floated by some ministers about these reductions indicate they would include cuts to salaries, bonuses, and benefits for public sector employees and retirees at the central bank, the armed forces, and the port authority. So far the reception hasn’t been positive: Retired military officers have been protesting and civil servants are going on strike.

Lebanon’s governing class has limited choices when it comes to getting the country and themselves out of this economic mess. All options mean cutting into their patronage networks, which often use public sector employment to gain and maintain political support. Imposing austerity measures on their supporters at a time when the majority of Lebanese blame the economic conditions on the corruption of the political class will not be politically cost-free. The old way of scapegoating political opponents will not work this time given the reform conditions put in place by international donors for the promised assistance package. The crisis has also become a test of wills between the central bank governor and the finance minister over who controls the central bank budget and operations.

Peace talks continue to dominate the Afghan political discourse and attract international interest. The event capturing attention last week was a loya jirga (or grand assembly), convened by the Ashraf Ghani government to discuss and set parameters for peace talks with the Taliban. The gathering in Kabul of at least 3,200 delegates from across Afghan society and the political spectrum was intended by the government to demonstrate popular support for its peace initiatives, and the necessary inclusion of elected officials in negotiations, something the Taliban has thus far steadfastly resisted. The meeting was also designed to impress on American negotiators in the current round of talks in Doha the Afghan people’s desire to control their own future and not have it be determined by others. Not incidentally, the government of Ashraf Ghani hoped a successful jirga would bolster its credibility heading into a presidential election, now scheduled for September. Unsurprisingly, then, most of the candidates vying for the presidency and all the opposition political parties boycotted the four-day event, as did the Taliban.

That the jirga gave momentum to the peace process is doubtful. It produced 23 almost entirely anodyne resolutions in the form of recommendations, only one of which was actionable. The delegates called for an immediate, permanent, countrywide ceasefire. But within hours the Taliban had rejected the plea, sounding an all-too-familiar mantra that no talks leading to an Afghan peace can proceed without the prior withdrawal of foreign forces. It was apparently not good enough that the delegates had endorsed the idea of a gradual, orderly departure of these troops, or that a ceasefire proposal had been sweetened by the government’s release of 175 imprisoned Taliban.

In trying to nudge the Taliban toward a political settlement, the jirga underscored the group’s unbending attitudes and seeming indifference to pressure. The assembly may also have unwittingly benefited the Taliban by magnifying the divisions among Afghanistan’s political elites.