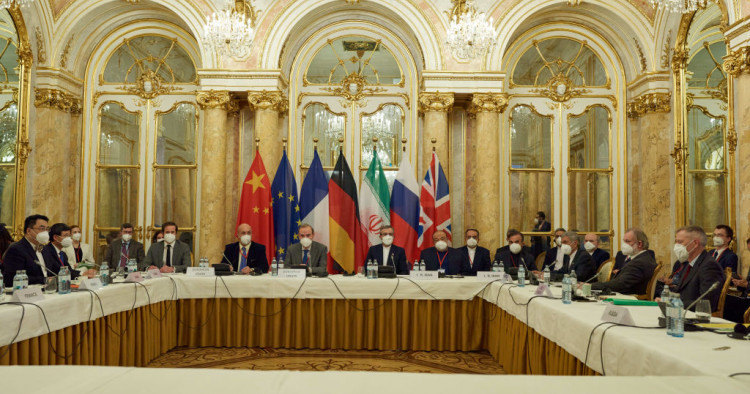 Ahead of the seventh round of the Iran nuclear negotiations that ended on Dec. 3 in Vienna, many observers interpreted Ebrahim Raisi’s election to the presidency and his recent rhetoric as representing a distinct shift in Iran’s nuclear strategy. Indeed, in November, Raisi’s government’s official newspaper Iran explained that Tehran’s strategy in Vienna has changed, and that it has embraced a new approach looking to compel the West to agree with Iran’s terms for a “good deal.” Yet there is more continuity than change in Iranian decision-making on the nuclear file than meets the eye, and Raisi’s election by itself has not represented a fundamental rearrangement.

There have been several clues as to Iran’s nuclear strategy heading into the 2021 Vienna negotiations — and they all took place months before Raisi became president in August. Iran’s Supreme Leader Ayatollah Ali Khamenei’s demands have consistently centered on full sanctions removal, verification, and guarantees.

In December 2020 — before Raisi even was a candidate — Iran’s Guardian Council approved a law passed by the parliament that required the government to limit monitoring by the International Atomic Energy Agency (IAEA) as well as increase enrichment of uranium, among other escalatory steps, if sanctions were not lifted within two months. Such a law would not have been approved without a greenlight by the supreme leader. Almost a year later, this law continues to be implemented, both under the presidencies of Hassan Rouhani and Raisi.

The second indication came early in 2021. In January, February, and March, Ayatollah Khamenei repeatedly maintained that Iran is not “in a hurry” to return to the nuclear deal and that a U.S. return to the deal will not be enough only on paper. For example, in a March speech, Khamenei reiterated his position on the nuclear deal, arguing that Iran was in a stronger position in 2021 as compared to 2015, and warning that “being in a hurry sometimes leads to more harm than wasting opportunities. An example is on the issue of the [nuclear deal]. We should not have hurried. All their promises existed only on paper, but ours materialized on the ground. We fulfilled our obligations in a hasty manner, but they did not fulfil their obligations.” The observation that Iran rushed in 2015 is revealing and underscores the reason why Tehran has taken its time to date. These positions — that sound as if they were taken from the Raisi negotiating team’s talking points — were issued before Raisi even registered as a candidate for the election.

The third piece of the Iranian strategic puzzle came in May — just before the Iranian presidential election — when an unnamed Iranian official told Reuters “if the deal is saved at the last moment possible, then the next president will benefit from the lifting of sanctions to improve the economy. This is the most favorable timing for him” — a reference to Khamenei. This demonstrated that the supreme leader was hesitant from the outset to allow Rouhani to revive the nuclear accord on his presidential watch to avoid emboldening his allies ahead of the election. In other words, Khamenei has been driving this process all along, and he’s been consistent in employing a policy of maximum delays both in Rouhani’s last days and Raisi’s early ones.

Even after six rounds of negotiations — during which progress was reportedly made — Khamenei still never gave his public blessing to conclude a deal with world powers. The supreme leader took a more than five-month vacation from talks without penalty and has allowed the installation of a new negotiating team, who lacks the diplomatic finesse of the Rouhani era. His approval of the replacement of Abbas Araghchi with Ali Bagheri Kani as deputy foreign minister for political affairs further signaled the establishment’s lack of urgency as Bagheri Kani does not speak English fluently, has been a critic of the nuclear deal, and was a member of past, and fruitless, negotiations with the West. If Khamenei wanted a quick deal, Araghchi would have remained in his post.

This is not to mention that during the seventh round of talks, Bagheri Kani was already proclaiming that “drafts are subject to negotiation. Therefore nothing is agreed on unless everything has been agreed on. On that basis, all discussions that took place in the six rounds are summarized and are subject to negotiations.” Reports from Vienna also indicate the E3 (France, Germany, and the United Kingdom) and the United States view Iran’s new proposals as maximalist and take a harder line from the Rouhani era. However, this is yet another stalling tactic by Tehran to extract greater concessions from the United States within the framework of Khamenei’s core demands — guarantees, full removal of all sanctions, verification, and not to mention the leisurely pace — which remain unchanged.

Well before Raisi became president, the contours of the decision-making debate inside the Supreme National Security Council (SNSC) had changed and hardened. Compared to when the original Iran nuclear deal was inked in 2015, the chamber, which builds consensus on crucial matters of state, has become more extreme. For example, the then-chief of staff of Iran’s Armed Forces, Hassan Firouzabadi — who had expressed support after the nuclear deal was inked and listed 16 “advantages” of the agreement — was replaced in 2016 by Mohammad Bagheri, who hasn’t lent such a hand. This is not to mention the arrival of Commander-in-Chief of the Islamic Revolutionary Guard Corps (IRGC) Hossein Salami on the SNSC in 2019 following his appointment as IRGC head. Whereas military figures like Firouzabadi actively supported Rouhani, Salami has been much more dismissive.

The trend continued in 2020, when Mohammad Bagher Qalibaf replaced Ali Larijani as speaker of parliament. Larijani, a conservative-turned-pragmatist, was an ally of Rouhani in parliament on the nuclear deal and helped him contain some of the criticism about the negotiations. But Qalibaf hasn’t been as forgiving and has complicated Iran’s engagement with the international community, making grand pronouncements in May 2021 that a temporary bilateral technical understanding with the IAEA to preserve continuity of knowledge into Iran’s nuclear program had expired, which later resulted in efforts to clean up his remarks. This is not to mention that SNSC Secretary Ali Shamkhani had already started distancing himself from Rouhani back in 2019, suggesting that Iran should not have signed the nuclear deal, and supporting the parliament’s nuclear legislation in December 2020, despite Rouhani’s own reported opposition. This set the stage for Shamkhani’s continuation as secretary under Raisi. Thus, the Iranian system’s shift started well before Rouhani left office.

In recent days, reports emerged that Israel has shared intelligence with Washington and European capitals that Iran is taking technical steps in preparation to enrich uranium to 90% purity. If true, it would be an alarming, significant, and unprecedented escalation, which could transition the international conversation away from diplomacy to military escalation. However, Tehran has dangled this move before — and it was prior to Raisi taking office as president. Rouhani warned in April and July 2021 alone that Iran could enrich uranium to 90% purity. Once again, there has been a consistency in Iranian threats over the last year that hasn’t broken, irrespective of Rouhani or Raisi being president.

Back to the future?

The implications of this dynamic are clear. Many describe the Iranian nuclear standoff as a pendulum moving between crisis and talks or conservatism and pragmatism. Raisi’s first months in office seem very similar to those of Mahmoud Ahmadinejad upon gaining power in 2005. Hossein Mousavian, a former diplomat, described in his 2012 memoirs the mood in Tehran when the regime’s approach to nuclear negotiations had changed in 2005-06, saying that, “Officials of the new government invariably noted that Iran should be resolute in the face of the United States to prove its new status and, if need be, should pay the price of its resistance.” Mousavian added, “With Ahmadinejad in power, the nuclear policy became aligned with the supreme leader’s real intentions.” This description indeed seems to be taken out of one of the latest op-eds in the Iran newspaper in 2021.

Back in the Ahmadinejad era, Iran had embraced a brinkmanship strategy, miscalculating its way into a crisis that resulted in the imposition of international sanctions and isolation. Judging by his strategic behavior and lack of urgency since 2020, Khamenei is borrowing from the 2005-06 playbook — a process that started long before Raisi took office — believing that he can continue playing hardball, test international red lines, and leverage Iran’s expanding nuclear program to produce more concessions from the international community, without paying significant costs.

In the end, Iran’s current approach to the nuclear negotiations is not all that new, despite the hype in the commentariat surrounding the transition from pragmatist Rouhani to hardliner Raisi. Washington and Europe must ensure that their interactions with Iran in the next few weeks will not give Tehran signals that its calculus is sustainable.

Jason M. Brodsky is the policy director of United Against Nuclear Iran (UANI). He is on Twitter @JasonMBrodsky.

Omer Carmi is a former visiting fellow at The Washington Institute for Near East Policy and a PhD student at Tel Aviv University. He is on Twitter @CarmiOmer. The views expressed in this piece are their own.